The woods along Bog Meadow Nature Trail support such lovely green shade lovers as May Apple, Maidenhair Fern, and Sensitive Fern.
(Photo by Sue Pierce)
Here are some photos my friend Sue Pierce sent of a nature walk I led June 6 at Bog Meadow Nature Trail, just east of Saratoga Springs.  The trail, which is owned by the city of Saratoga Springs but watched over by Saratoga PLAN (Preserving Land And Nature), runs about two miles along an old rail bed through three distinct wetlands:  open marsh, wet meadow, and forested wetland.  (No true bogs, however.)   We had a group of 15 or so, including many delightfully inquisitive children, and we explored a new spur of the trail now being improved by volunteers.  It's a remarkable site, with well-groomed trails and many interesting plants and lots of birds and wetland denizens.  I bet Sue's wonderful photos might encourage some folks to go check it out. 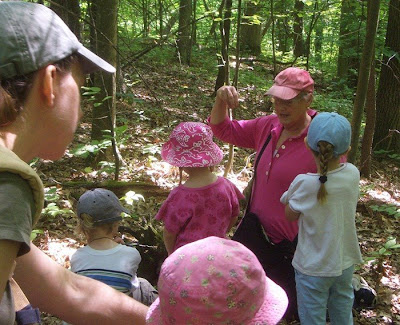 The  children were all ears  -- and good sharp eyes for finding  really cool stuff along the trail.  (The big kid in the red hat is me.) 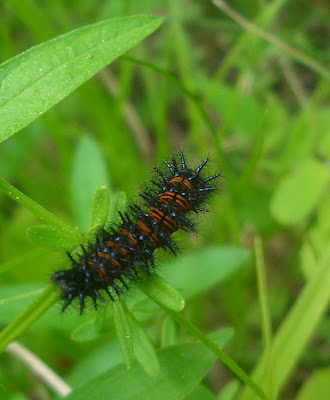 Sue found this spiky guy but couldn't find a name to match on Google images.  Anybody know? 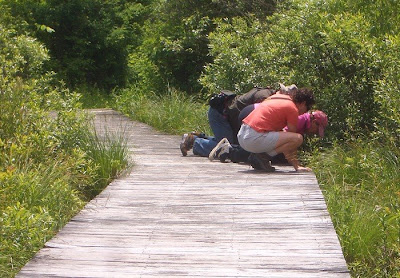 What's growing (or hiding) down there?  Nature brings out the inquisitive kid in all of us. 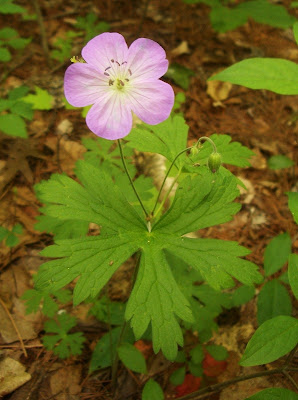 Wild Geranium brought some color to the mostly green color scheme of the woods in June. 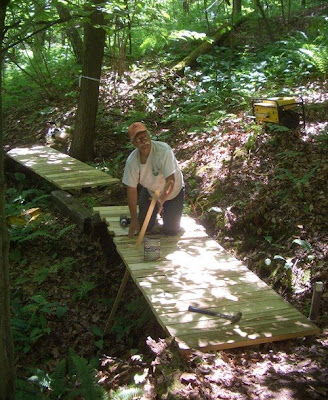 Geoff Bornemann is among the many unsung heroes who help keep the trail in great shape.
Posted by Jacqueline Donnelly at 10:08 PM

Nice collection of photos Jackie. The spiny caterpillar is a Baltimore Checkerspot (likely searching for Beard's Tongue to feed on). It appears to be the final instar that will pupate in a few days, then emerge 10 days or so later (depending on temperatures) as a fresh adult butterfly.

Thanks, Steve, for identifying the caterpillar for us. I'll pass this information on to Sue Pierce, who took this collection of great photos. She figured I'd be too busy fielding questions to take any photos myself, and she was right!

P.S. to Steve: I have a photo of a Balltimore Checkerspot on the sidebar of my blog, third from the bottom on the right. That one, taken at Bog Meadow, too, was interested in Yarrow. Or maybe just resting there.

Well, dang! I see they beat me to it again! Baltimore Checkerspot. Oh, well, the researching exercise was good.