No rain today (amazing!) but threatening skies kept my wanderings close to home once more. Hmm, I thought, maybe the Canada Lilies are blooming along Bog Meadow Trail. Well, they weren't, but I found lots of swelling lily buds, so maybe later this week. I still enjoyed a four-mile walk and found a few pretty things.
The shaded parts of the path were bordered with Swamp Dewberry (Rubus hispidus), smaller than its earlier-blooming cousin R. flagellaris and with shinier leaves.
Standing tall on either side where the trail passed through wet meadows was Tall Meadow Rue (Thalictrum polygamum), its fluffy white flowerheads seeming to float at the top of its slender stems. 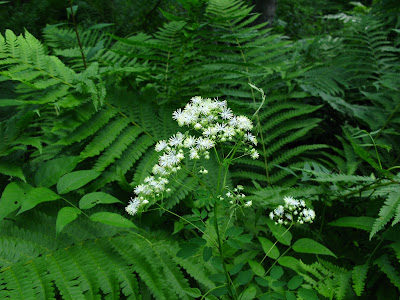 Some things were so tiny I almost missed them, like the minute white blossoms of Enchanter's Nightshade (Circaea quadrisulcata), hardly a showy plant, but worth peering at closely. This plant does not belong to the Nightshade Family, despite its name (it belongs to the Evening Primrose Family). But the shade it grows in is almost as dark as night. It was some kind of enchanter's trick my photo is in focus. (Parts of it, anyway.) 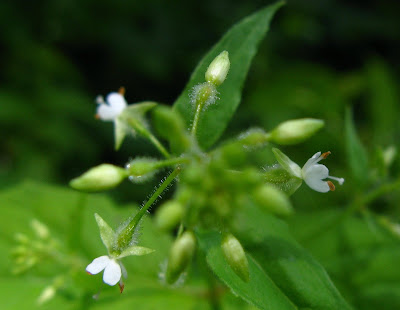 The fluffy little burrs of Yellow Avens (Geum aleppicum) are also worth a close look. Subtly colored but really beautiful. 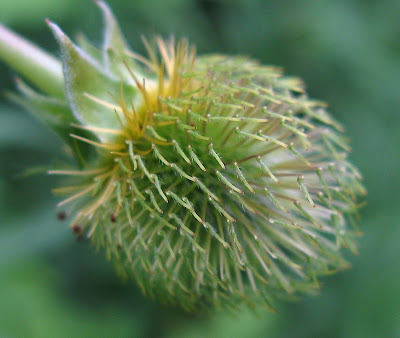 What looked like a plain brown beetle grazing the flower head of Water Hemlock (Cicuta maculata) turned out to have striped and curving antennae worth a second look. (All parts of this plant are deadly poisonous for us humans to taste; I wonder if the pollen and nectar of its flowers are exempt.) 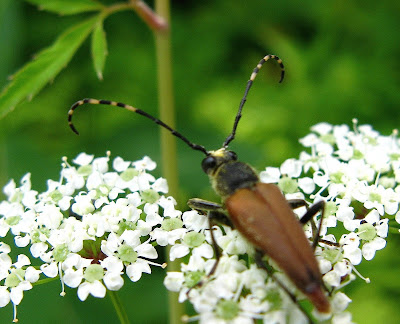 When I reached the boardwalk over the open marsh, it wasn't hard to spot the showy beauties that flourish there. Including this just-coming-into-bloom Swamp Milkweed (Asclepias incarnata).
And this Yellow Loosestrife (Lysimachia terrestris), also known as Swamp Candles for the way its bright yellow blossoms cluster together in a terminal raceme. This is one of our native loosestrifes, not closely related at all to the alien aggressor Purple Loosestrife.
Not all the beauties I found today were flowers. These bright red berries of Red Baneberry (Actaea rubra) are far more eye-catching now than were its greenish-white flowers back in May.
The same goes for Dwarf Raspberry (Rubus pubescens), whose greenish-white flower has barely visible petals, but whose bright red berry was glowing like a ruby in the sun.
Posted by Jacqueline Donnelly at 9:17 PM

I really enjoy reading your blog and am learning quite a bit from your plant shots. I'm new in the area and the out-of-doors life, bought a place on the Rensselaer Plateau last fall that's been here for 200 years. There are so many plants on my property that I don't know what they are - some are wild but many aren't. I've been posting my unknowns on my blog: http://bluehillstead.blogspot.com/

Maybe you know what type of cherry this is? http://bluehillstead.blogspot.com/2009/06/cherry-tree-id.html

How fascinating to compare your flora with ours! I recognise the dainty enchanters nightshade and wonder if it's native to you or us, and of course the Purple Loostrife we are so glad to see along our waterways because of their relative rarity would have to turn out to be an aggressive invade with you.

Hm...another mystery insect. Looks like some species of longhorn beetle. I may have to look it up... :D

Thanks, Jordan. I enjoyed looking at your blog. What a lovely place you have! Isn't it fun to learn the names of what's growing there? I'm glad you have a real botanist for a guide. I'm just an amateur enthusiast, and I can't ID that cherry tree. Sorry. But I enjoyed the visit.

Hi Bird. Yes, we wish your lovely Purple Loosestrife had stayed home where it belongs! I think I see some leaf damage now and then, so maybe our local bugs are developing a taste for it here. The Enchanter's Nightshade is native to North America, but there is a similar species native to Asia. Maybe some stopped to visit in Europe and decided to stay. Is it welcome there or is it pestiferous?

Ellen, I browsed around "longhorned beetle" sites on the web and found one that looks like this one: Brachyleptura rubrica. Big name for a little bug!

Hi again Woodswalker... from what I can find in my field guides and a little googling, the very same Enchanters nightshade is also considered native to Northern Europe - I guess it's a very old and successful species! It's not particularly considered a pest here. In the past, in tiny overshadowed gardens with little promise I've allowed them to take over a little :D