Home to Where the Wildflowers Grow 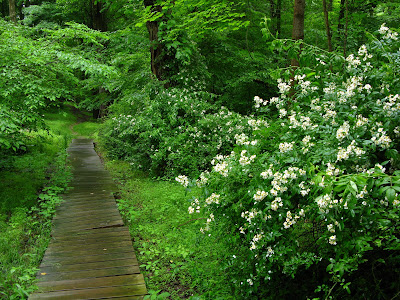 Westchester County woodlands are lush and fragrant with Multiflora Rose.  And hardly any native flowers.
We wildflower lovers in Saratoga County should really count our blessings:  Skidmore Woods, Woods Hollow Nature Preserve, Moreau Lake State Park, Wilton Wildlife Preserve, Bog Meadow Nature Trail -- all of them repositories of native (and even rare) species.  I've just returned from five days in Westchester County, downstate near New York City.  While there, I scouted out some of the best nature preserves in that county:  Mianus River Gorge near Bedford,  Teatown Lake Reservation near Ossining,  and Ward Pound Ridge Reservation near Cross River.  And I couldn't wait to get home to my Saratoga County haunts, where native wildflowers still find a place to call home.  So far.
There's no question that Westchester County looks gorgeously green and lush: rocky cliffs covered with vines; dark leafy woods marked off by lichen-covered stone walls; narrow windy roads where the trees meet over the middle; sparkling streams that tumble down forested hillsides -- in short, astonishingly woodsy-rural for all the density of its population.  However. . . . Those lush vines covering the rocky cliffs?  Oriental Bittersweet.  The undergrowth in those dark leafy woods?  Garlic Mustard and Japanese Barberry.  The beautiful bushes lining those narrow roads?  Multiflora Rose.  Invasive aliens, all.  Aside from mature trees, some ferns and skunk cabbage, there was hardly a native species to be found.  Even the wild strawberries there were alien "Indian" ones -- as inedible as they were pretty.
"Indian" Strawberries:  They look good enough to eat.  But they aren't.
There were a couple of exceptions:  Wildflower Island at Teatown Lake (by appointment only) and the Wildflower Garden at Ward Pound Ridge (no dogs or unsupervised children allowed). What sets these lovely preserves apart?  Chain-link fences or other barriers to keep the deer from browsing.  It looks like the only plants that survive outside the fence are those the deer won't eat.  Now, we up here in Saratoga County have lots of deer, how come we still get wildflowers?  I wonder if it's because we also have lots of hunters.  And places where hunters can shoot.  That's certainly one of the ways Saratoga differs from Westchester County: our lower population density, of both deer and human beings. With a consequent higher population of native flower species. 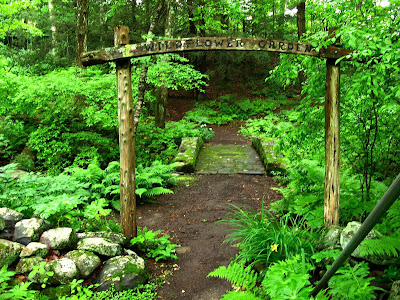 The wildflower garden at Ward Pound Ridge Reservation is fenced to keep out the deer.
One native wildflower I found down there was right in my daughter's garden:  Venus's Looking-glass, which I mentioned a few posts back.  Then her landscaping crew arrived yesterday, mowing the grass and weeding the gardens.  Well, you can guess what happened.  They missed just enough for me to bring some home to plant in my own garden.  I hope it survives.  I've got my own ravenous crew of squirrels and rabbits and Viburnum Leaf Beetles.  But so far, no deer.
Posted by Jacqueline Donnelly at 8:13 PM

I love the first photograph of the path. That makes me want to be there NOW! It looks like a wonderful spot for a walk.

Yes, Carolyn, that woodland path looks beautiful and smells even better -- with all that Multiflora Rose in bloom. But that lovely bush is an aggressive introduced species that has pushed out our native roadside shrubs. I couldn't find a single Panicled Dogwood or Elderberry or Shining Sumac anywhere in Westchester County.