Here are a few odd things I came across in the last few days.  Some I can't explain, so readers, please chime in if you have an explanation.  Or even a guess.
First was this poor bumblebee, scrabbling around in the damp sand near a wetland.  It was grabbing at spent honeysuckle blooms that had fallen to the ground, burying its face in them as if desperate for pollen and nectar, but quickly dropping one and moving on to another.  I wondered if its wings were torn, but I picked it up on a twig to see it closer,  and its wings looked OK.  It clasped the twig and fanned its wings a little, but did not fly away.  I put it back down on the sand and it continued its odd behavior.  I put some fresh honeysuckle flowers down before it, but it completely ignored them and went back to snuffling around in the old ones.  Maybe ten feet away I found a dragonfly clinging to a blade of grass, and it, too, would not (could not?) fly, although its wings were intact.  I wonder if both had been poisoned, or were they at the natural end of their lives?  The wetland was right behind the Great Escape amusement park.  I wonder if the park sprays for mosquitoes, and these little critters got hit?
* * * 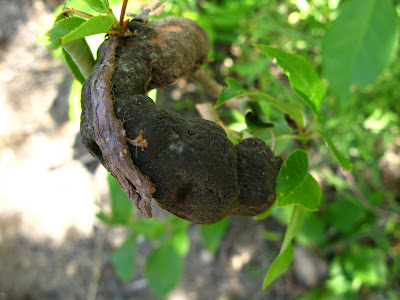 Climbing up the steep bank from where I watched the bee, I went to grasp at a seedling tree to help haul me up, but quickly withdrew my hand from almost grasping this thing.  Eeeew!  Must be dog poop, I thought, but then noticed that leaves were growing out of it.  Chokecherry leaves, I believe.  There were a number of these growths on little cherry saplings along the bank.  They were hard, like wood (yes, I got up the nerve to touch them), and they didn't have any particular smell (yes, I did sniff at them a little).  I wonder if they are some kind of gall caused by insects or fungus.
* * * 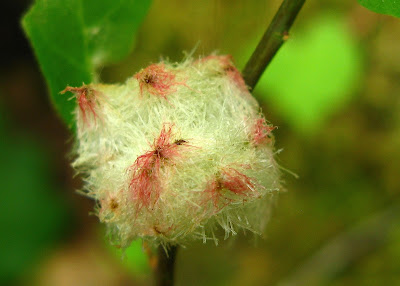 Another odd growth, this time on a seedling White Oak growing in a forested wetland along Bog Meadow Trail just outside Saratoga Springs.  At the center of those pink spots there seems to be something dark and shiny poking up through all that fuzz.  I only saw one little seedling affected.  Anybody know what this is?
* * * 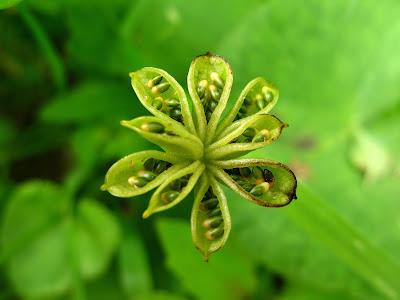 Anybody know what this is?  I admit, I didn't at first, but then I saw the big heart-shaped leaves of Marsh Marigold around it.  It's the seed head of the flower, just splitting open and about to spill its seeds.  I thought they were kind of pretty.
* * * 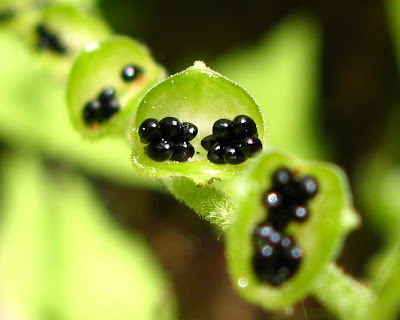 Another flowerhead gone to seed and about to spill its contents:  Miterwort.  I can't believe I got this photo in focus.  Those seeds are really tiny!
* * *
And here are some other tiny things:  baby pine cones just emerging from the end of a needle cluster.  I'm pretty sure this is a Red Pine, long flexible needles, two to a bundle.  I've never seen baby cones before they turn brown and harden.  Aren't they just darling?  And see how the baby needles come wrapped, two to a package, as if in plastic.
Posted by Jacqueline Donnelly at 8:48 PM

Your arboreal dog poop is really black knot of cherry. It's a fungal disease of many Prunus spp. It causes those swollen gall-like growths, and people who're growing Prunus spp. for fruit despise it. The name of the fungus is Apiosporina morbosa.

Ooo - Kathie beat me to it! I was going to say that if memory serves me the black "poo" is black knot, a fusiform fungus. I remember my dad getting all upset when it appeared on our neighbor's trees; he feared it would jump into our yard where he had planted all sorts of fruit trees. We see it all over the place up here - chokecherries seem to be the most affected.

As for your poor insects, it sounds to me like they've been poisoned. Wouldn't surprise me one bit that Great Escape sprays - afterall, it would cut down on their bottom line if people stopped coming because of the mosquitoes and blackflies.

I wonder if the fuzzy thing on your oak is the start of an oak apple gall. HM. Probably not, but it's the right shape and has spots (the pink bits) spaced sort of like the brown spots on an oak apple.

Thanks, Kathie and Ellen, for your informative comments. I'm so grateful to have friendly experts to fill in my knowledge gaps. That fuzzy oak thing may yet grow a thin brown crust and become oak apple. I'll keep my eye on it.

Let's all mourn the poisoned insects, especially such beneficial ones as bees and dragonflies. It's true I wouldn't mind murdering black flies (I write this with face and neck gnawed to bits by their jaws), but not at such a cost to all other critters.

Have some of that on the chokecherries right across the alley.

Whenever I'm hiking I always wish for an expert companion to tell me what everything is.