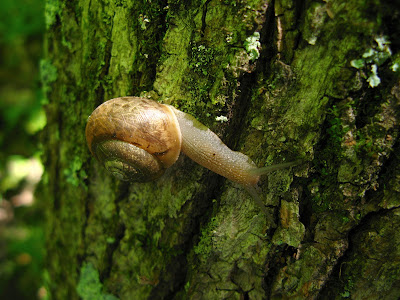 This snail and I share similar views about how to enjoy a walk.
My Google home page told me today was National "Take a Walk" Day (or something like that).  They even gave instructions on exactly how to take a leisurely walk.  Imagine!  But yeah, I've been with folks who didn't know how to take a walk without hurrying toward some goal, folks who scurried right past cool stuff and never even saw it.  Nor smelled it.  Nor heard it.  Nor stopped a while to watch it do its thing.  Like that spider nabbing that wasp a few posts back.  Or this snail I saw today making its leisurely way around a tree trunk.
As you can imagine, I don't need the urging of a national "day" to send me out on a walk.  Today I went back to Mud Pond at Moreau Lake State Park, since my adventures there yesterday got me no further than 50 yards or so along the shore.  TWO HOURS to go 50 yards!  That snail could almost outrace me at that rate.  I picked up the pace a bit today and managed to get all around the pond in about an hour,  yet still saw some pretty cool stuff. 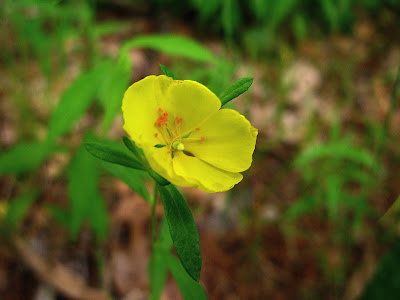 I did find one Frostweed flower in bloom.  My friend Sue told me they'd bloomed profusely three weeks ago, so I missed the full flush and felt lucky to happen upon this one. 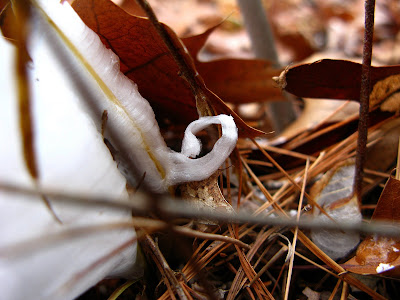 And here's a photo of Frostweed I took last November, following a hard frost.  See how the frozen sap has seeped from the stem in curling sheets and plumes?  That's how this flower got its common name.  One of them.  It's also called Rockrose.  Its scientific name is Helianthemum canadense. 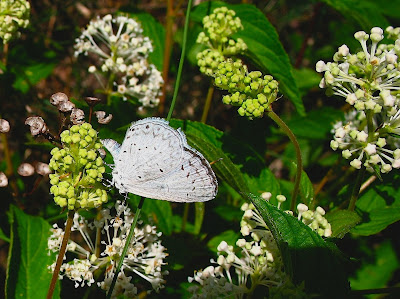 Once again, the critters took center stage today, including this pretty Spring Azure butterfly (Celastrina argiolus) feeding on blooms of New Jersey Tea (Ceanothus americanus).  Those blossoms look a bit like miniature fireworks, the kind that explode with shooting stars. 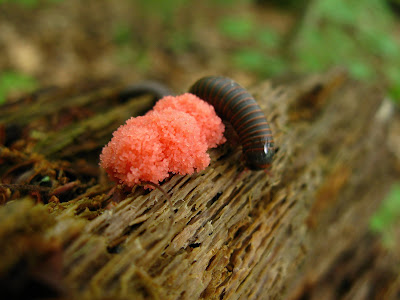 I thought I was photographing Raspberry Slime Mold (Tubifera ferruginosa) when this Narceus americanus millipede showed up to steal the spotlight.  They both like to work at decomposing rotten logs.  And they're both kind of beautiful.  They kind of color-coordinate.
Now, I hope some computer watchdog agency doesn't come after me for posting all these photos of insect sex.  It's just that everywhere I look these days, they're doin' it, doin' it, doin' it.  Like this Lady Bug and her Gentleman Bug pairing up in their hazelnut boudoir. 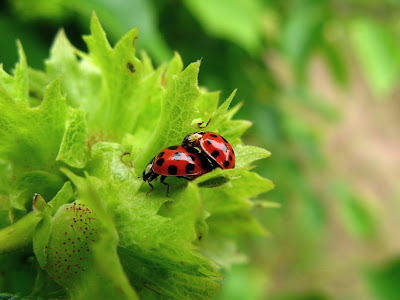 This pair of back-to-back white butterflies really knew how to get it on together.  Totally!  Several times they flew away as I moved in to take their photo (well, jeez, Jackie!), and they flew away together, still attached.  How did they do that?  You'd think some kind of push me/pull you thing would happen, but no, they fluttered about in tandem as easily as if each was solo.  I'll call them Fred and Ginger.  Anybody know which is which?  Anybody know their Latin name?

Posted by Jacqueline Donnelly at 9:13 PM

Your website is hereby cited for indecent insect exposure. Please include an "18 and over only" warning for all future postings of this nature =)

Actually, we loved this post! It's so important for people to go for walks, and you sound like you go at just the pace that we enjoy. There is SO MUCH to see and smell and hear and touch (and taste, if you enjoy wild edibles) out in the woods and fields!

A really nice set of macros.

I think those are cabbage whites (the butterflies) - but I don't have my ID book handy to give you a scientific name.

I've got rose chafers "doin' the nasty" all over my plants at home. Everywhere you turn, they are coupling. And those that aren't are eating my plants. Hundreds and hundreds of them. Argh!

I LOVE that slime-mould! Dont ever think I've seen such a pretty one - they mainly look like something the dog coughed up :)

I would also LOVE to come walking with you. Two hours to go 50 yards sounds like a dream to me! You have the proof here in this blog of how much beauty and fascination there is to discover if you spend your time just going slowly and looking. I am horrified when invited out for a walk by friends and all they want to do is rush along talking furiously and not seeing anything. My idea of a walk is getting out to look at things, not to break some land speed record!

Thanks, everybody, for leaving such kind and informative comments. You are all the kind of folks I'd love to go for a walk with.