June on the Hudson. Chestnuts in Blossom. 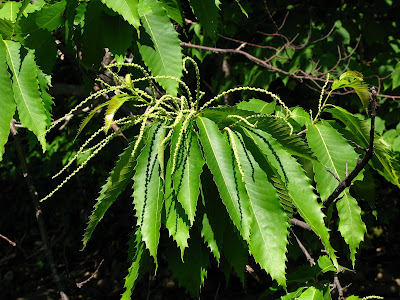 A rare sight:  American Chestnut mature enough to burst into bloom
Such a beautiful day for a paddle.  But not so great for taking good photos.  It was sunny and warm, but a brisk wind set the branches to thrashing, and waves rocked our boats away from whatever we tried to focus on.  My friend Sue and I  hit the river today to hunt for chestnuts in blossom.  And sure enough, we found them.  A number of them.  Hanging right over the water in plain view.  But that blurry photo up there was the best I could do, trying to shoot from a boat that felt like a bucking bronco.
Nevertheless, I'm glad to have any kind of photo of American Chestnut.  This is a tree that a blight has wiped out of America's forests, but scions still shoot from old stumps, and  once in a while they survive long enough to actually bloom and set fruit.  Unfortunately, the fruit is usually sterile, since cross-pollination can't occur if no mature mate is growing nearby.  Genetic finagling might one day create a blight-resistant chestnut, but for now this is all we have left of what was once the most predominant tree of our local forests.
Silky Dogwood is just coming into bloom, its flower quite similar to other clustered dogwoods. I have a hard time telling these dogwoods apart, except Silky blooms later than Red Osier and Round-leaved dogwoods, and its berries are the most beautiful blue in the fall.  Also in bloom today and growing out of the same rocky bank were shrubs of Bush Honeysuckle and Maleberry.  My dogwood and honeysuckle photos were blurred, but the Maleberry came out pretty clear, its tiny waxy blossoms densely clustered and perfectly round. 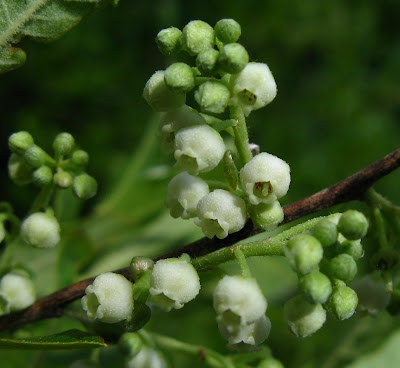 Maleberry blossoms
Wild roses glowed pink against dark mossy banks.  Because of tossing waves that threatened to crash my canoe on the rocks, I couldn't get close enough to examine its thorns and stipules and thus determine the species.  Swamp Rose?  Virginia Rose?  Smooth Rose?  Let's just say this: Lovely Rose.  And deliciously fragrant rose. 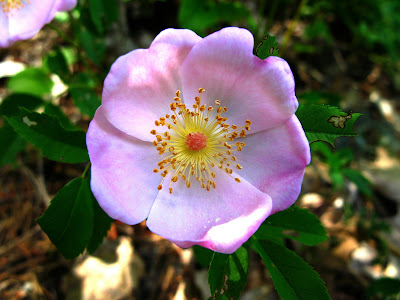 A rose by any name is a lovely rose.
There were other treasures along the banks, especially once we made our way downstream to a sheltered bay.  There the water smoothed and wandered way back into a marsh and around rocky coves where the banks were spangled with Sundrops and tiny Bluets and Blue-eyed Grass.  Arrow Arum and Pickerel Weed thrust their large arrow-shaped leaves from the standing water, and other water plants were thriving, too. 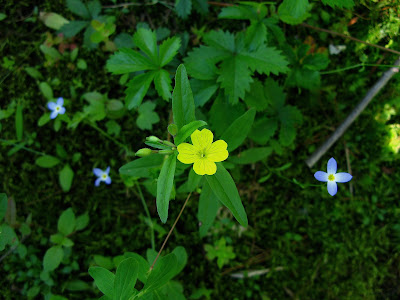 Sundrops and Bluets spangled the mossy banks.
These little pink prongs were sticking up from the surface, their feathery foliage waving in the current underwater.  Aaargh!  I thought.  Is that Eurasian Milfoil? (A horribly invasive alien weed)  But later I searched the web and found photos that matched my little pink prongs, and they belonged to the quite benign (and native)  Northern Milfoil (Myriophyllum sibiricum). 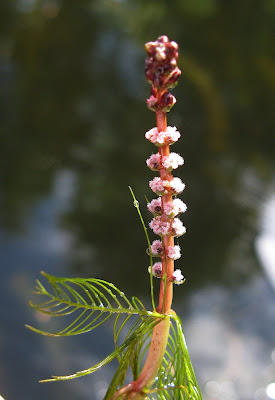 Is this the dreaded Eurasion or benign Northern Milfoil?
At least, I'm hoping so.  The foliage looks more like the alien kind, but none of the images of that plant showed these pretty pink flowers.  Can any of my readers weigh in on this?
Postscript:  After further searching the web for information,  I'm afraid that this is the dreaded Eurasian Milfoil.  Apparently, the number of leaflets is diagnostic:  natives have 9 or fewer, aliens have more than 10.   This has, what, 12 or 13?  Now the question is, how do we get rid of it?  At present, the patch is not too large.  Can we somehow confine it?
Posted by Jacqueline Donnelly at 9:12 PM

I'm glad you found your American Chestnut - it must have been a terrible time when the blight wiped them out. I'm just old enough to remember Dutch Elm disease in the UK; I was only five. One week, my school playground was fringed with beautiful mature elms, the next week those same elms lay dead, their trunks dismembered on the tarmac.

I love the Maleberry, it's a very unusual flower, almost alien in some indefinable way. Sundrops is such a lovely name for a flower - and what a beautiful picture of them with the bluets. And the rose reminds me - I have to go out right now and smell the garden :)

Try contacting Hilary Smith at APIPP - the Adirondack Park Invasive Plant Program (her email should be on the email I just sent you). She may be able to help you out with recommendations for your milfoil.