Ah, to be Back on the River! 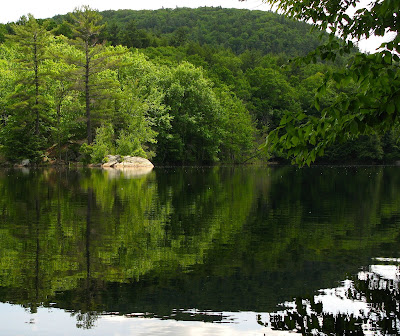 At last the gales have gentled to breezes, and the river has dropped from flooded banks to just a little bit high.  Time to get my canoe back out on the Hudson.  I launched at a sheltered spot behind an island and set out to see what might be in bloom today.  Most of the iris are still sulking from having been nearly drowned all week, although their leaves are still spiky and green, so they may yet set bloom this season.
It amazes me what resilience these plants that grow on river banks have.  A few years ago, the dam downstream was being repaired, so water was held back behind another dam a few miles up.  The river receded from its rocky banks, leaving wide mud flats along its course, which were promptly covered with flowers whose seeds must have been waiting there in the mud for years. And even in ordinary years, the water rises and falls several times a day as dams are opened and closed.  What grows by the river has to be able to tolerate daily submersion.  I've seen their flowers blooming away, completely underwater. 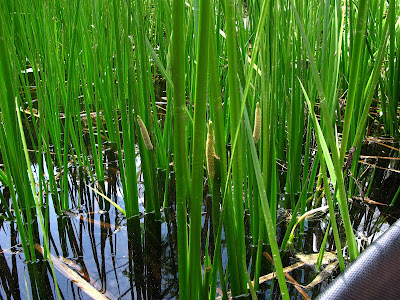 Sweet Flag is very happy to have wet feet.
Not much was in bloom today.  Dear Bluets, of course (they never give up!), some Swamp Buttercup and Dewberry, that's about all.  Oh, except for Sweet Flag (Acorus calamus), a nice big colony near Juniper Point, in bloom much earlier than I've found it in previous years.  I passed that clump many times, assuming the plants were Cattails, but one year I saw its distinctive spadices protruding from the spear-shaped spathes I had thought were leaves. Looking for information about this plant, I found conflicting stories.  Some sources say it's a native, some claim it was introduced.  I don't think it is very common, anyway.  This is the only place I've ever found it. 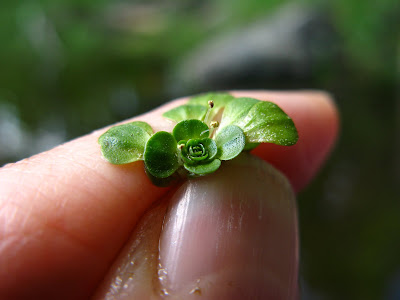 Anybody know what this little green "rose" is called?
Some water plants were thriving in a shallow, quiet cove, including these tiny green rosettes floating on the surface above their stems and needle-shaped leaves.  I think I see some minute little anthers sticking up.  Does anyone know what this plant is called?  I don't have a guide to water plants, so I can't look it up, and I didn't find anything that looked like it on Google images.  I hope it's  not one of those horrible invasives we hear about.
Lance-leaved Violet doesn't mind getting wet feet.
The river saved the best for last today.  Passing a mossy bank on my way to take-out, I noticed some tiny white violets still in bloom.  Hmmm, I thought, it's awfully late for Sweet White or Northern White violets, what could these be?  Well, their leaves clued me in right away: lance-shaped rather than heart-shaped.  Why, these must be Lance-leaved Violets (Viola lanceolata) I thought.  And so they were.  Another new violet for my life list.  And it must be a sturdy one.  This plant was under water a few days ago.
Update, June 25:  My friend Ellen Rathbone came through for me again, finding a name for that little green "rose" of a water plant.  It's called Water Starwort and it's definitely a beneficial native plant, providing food and shelter for water-dwelling creatures.  I won't be able to tell if its Common Water Starwort (Callitriche palustris) or Larger Water Starwort (C. heterophylla) until I can look at its fruits, later in the summer.  But what a relief, to know it's not an invasive!  Thanks, Ellen.
Posted by Jacqueline Donnelly at 8:33 PM

I have my key to aquatic plants here, but need more info. 1A - plants with true leaves, or true stem and (usually) roots; floating or rooted; aquatic, or on shore? OR 1B - Plants without true leaves, stem and roots (although rootlets are present on some thalloid duckweeds); plants with small (2-8 mm long) leaves as in the mosses, or plants filamentous? I'd go with 1A (you did mention a stem) - would you concur?

I gave up on trying to key it out. Following 1A, it wasn't working. So, I've sent your photo and description to the Nature Conservancy and the Adiorndack Invasive Plant Program folks...hopefully Hillary will help us out.

Thanks, Ellen, I emailed you more info and another photo of plant with rooted stems and leaves. Let's hope somebody knows what this is so we can all learn about it. I've seen it in years past and it hasn't taken over the quiet water where it grows, so let's hope it's a friendly little duck-feeding native and not some horrid invasive.