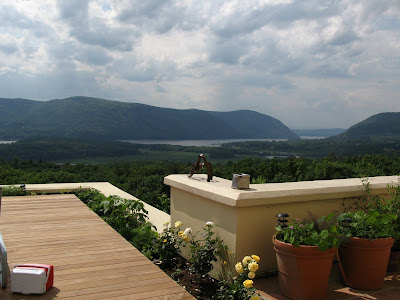 A view of the Hudson from Other Grandpa's terrace
Well, I didn't make it to see any 400-year-old hemlocks today here in Westchester County (see last post), but I did see some replicas of 400-year-old ships.  My grandchildren's other grandpa invited us all over to his castle (yes, he does live in a castle!) in Garrison, NY, high on a hillside overlooking the Hudson River.  The occasion was to witness a celebratory voyage of a replica of Henry Hudson's ship Half Moon as it sailed up the river Hudson first navigated 400 years ago.  We certainly had prime viewing of the river from the terrace. 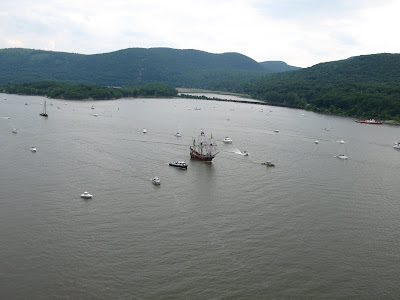 Here they come!  A replica of Henry Hudson's ship approaches the Bear Mountain Bridge.
But the children grew restless waiting, so we drove a few miles south to the Bear Mountain Bridge just as the Half Moon, accompanied by other antique ship replicas, the environmental-education sloop Clearwater, and  numerous pleasure and security craft, approached the bridge.  It's hard to believe sailors had the courage to cross the Atlantic in ships as small and fragile as these appeared. 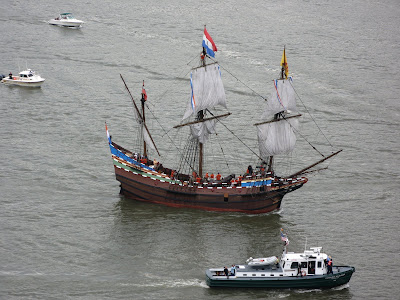 A replica of the Half Moon 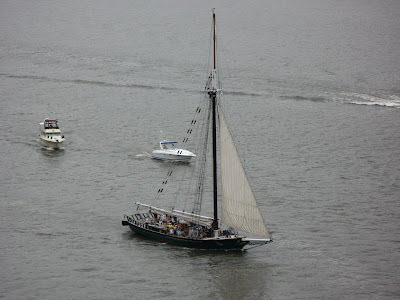 The sloop Clearwater, an environmental-education craft that promotes the cleaning-up of the Hudson 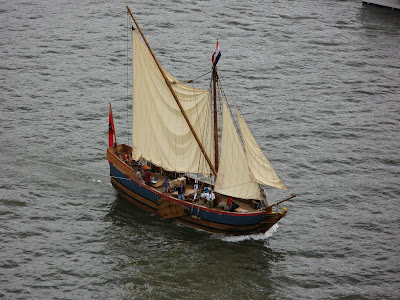 A replica of another Dutch ship of Hudson's era
I did get in a few minutes of botanizing today, checking out the Westchester and Putnam County weeds along the road (a little different mix than Saratoga County's) and admiring the glorious gardens around grandpa's castle.  But the high point was finding  Venus's Looking-glass (Specularia perfoliata) in my daughter's garden when I went out to fetch the morning paper.  It's not supposed to be there (yes, it's quite a pushy little weed) and it probably will be pulled out as soon as somebody else sees it.  But it was a first-find for me, so I was happy to notice it.  Plus, it's really, really pretty.  And it's a native wildflower.  I think I'll dig some up and take it home to push back the Bishop's Weed sneaking into my garden from my neighbor's yard. 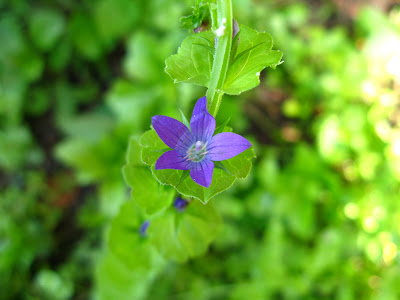 Venus's Looking-glass.  Some folks consider it a pushy weed.  Imagine!
Tomorrow I hope to find those old-growth hemlocks at Mianus River Gorge.  The last child gets the school bus at 8:30 a.m. and I have the day free until 3:30.  Then the children have music lessons.  And the hemlock preserve closes at 5.  (Sigh!) It's really hard to get kids into the woods these days.  When I was a kid, it was hard to get me out of them.  Actually, it still is.
Posted by Jacqueline Donnelly at 10:42 PM