Hey, where'd our winter go? I've been gone a week down to Westchester County to care for my grandkids and came home today to find most of our lovely snow disappeared. And I just got new snowshoes, too! Oh well. We're sure to get more.
Anyway, we should still have ice. At least, where the water is still. There was plenty on Moreau Lake last Sunday when I brought my granddaughters (ages 16, 12, and 9) back to Saratoga for a little outdoor adventuring. I think it was their first time ever walking on a frozen lake. I wonder if when I saw them thumbing their cellphones, they were texting their friends back home about how cool it all was? 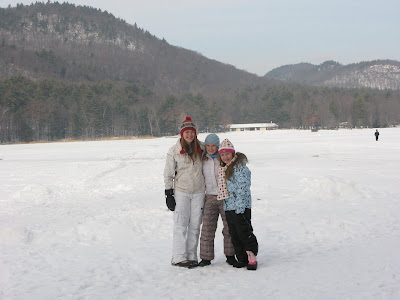 They look pretty happy, don't they? And they have a genuine affection for one another that's wonderful to see among sisters.
The girls and I joined my friends Sue and Jackie C. to tromp around on the lake ice, trying to ID the tracks in the snow. Mostly ice fishermen and their dogs. But we did have a moment's excitement when we found some huge tracks that we thought might be MOOSE! But nah, they were probably horse tracks. (There were moose seen at Moreau last fall, so hey, it wasn't impossible, was it?)
My daughter and her husband returned from their five-day vacation last night, and today my daughter could sense my hunger to get back out into the woods. So before I started the long drive home, she took me to visit a small marshy preserve just a couple of miles from their house. 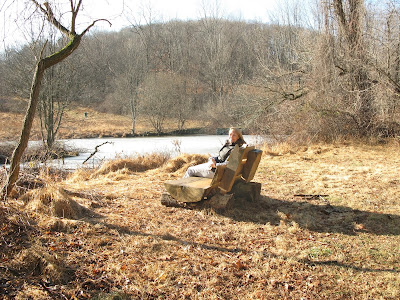 That's my girl!
I was delighted to spend a little more time with my daughter, as well as to get outdoors. The weather was sunny and the place was very pretty, with a singing brook, a steep path to a high overlook, and a whole bunch of deer, who bounded away at our approach, white tails flashing. We also watched several Turkey Vultures soaring over the hills, a bird that we won't see again here in Saratoga County until spring. It's amazing how many woodsy, watery, rocky spots there are all over Westchester, despite the density of the population there. Now I know another place for a nature fix next time I return.
Posted by Jacqueline Donnelly at 9:07 PM

I've been wondering the same darn thing! At least we've got a nice new layer of powder on top of our skimpy snowy ice-pack.

Do you know any good snow dances?

What a great bench she sits upon -- looks like something I'd make!!

It was so great to spend that morning with you mom! And i never would have gone exploring there without you. love you!