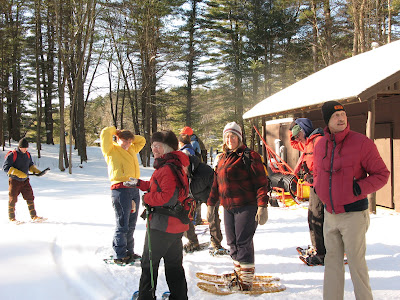 See the big smiles on those two red-coated women in the center of this photo? Those are friends and fellow bloggers Sue (left) and Ellen, and we were all mighty happy to be gathering at Wilton Wildlife Preserve and Park today for a tracking experience led by Vince Walsh, tracker extraordinaire and one of the nicest guys you would ever want to spend most of a day in the woods with. That's Vince over there on the left, holding the shovel, and here he is again, in the photo below, having used that shovel to scrape the fresh snow from a set of animal tracks, the better to examine the prints. 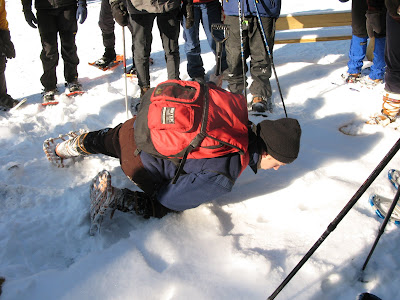 Vince had most of us down on our knees at some point during the day: to measure the depth of prints, to blow obscuring snow away, to determine which way the paws went in, or to stick our noses right down on the trail to sniff the yellow snow. (Dog pee and fox pee certainly do smell different!) That's the thing about Vince: he not only knows an amazing amount of stuff, he also knows how to make us want to follow his example.
We found fisher and mink tracks as soon as we started exploring the trails by a stream, and spent some time figuring out what time last night a fox set off across a pond. We puzzled over a mystery critter whose waddling trough of a trail disappeared and was never seen again. (Had a raccoon found its way under a cabin?) We found fresh fox tracks, which led to where she stuck her snout in the snow to feel out the presence of mice, then continued on to where she squatted to mark a stump with pee. Male foxes sometimes squat to pee. How did we know this fox was a female? That pee spot was right between the hind feet, a male's would have been somewhat forward. Location, location, location!
Despite the frigid temperatures (it might have warmed up to 15 today), I could have stayed in the woods much longer with such an engaging guide as Vince Walsh. A licensed New York State wilderness guide, Vince runs a nature awareness center called Kawing Crow in Greenfield, NY, and leads such tracking workshops frequently. I'll be checking his website often to learn his schedule. You can, too. If you ever have a chance to learn from him, don't miss it.
Posted by Jacqueline Donnelly at 7:51 PM

Location, location, haha.
A great description of a great day.
Thanks for mentioning the workshop in your blog, weeks ago!

Wonderful! Wonderful! It looks like it was a great day. Sorry to have missed it.

This looks like it was incredible fun as well as being so educational, I love things like this. I'm also hugely envious; I very much doubt there will be any trackers giving talks in London but I'll keep my ear to the ground just in case :)