Some days are just really dull, and today was one of those days. Or so I thought. With the temperature just above freezing, the snow had turned soggy and heavy, and the sky was a low dark overcast that robbed the landscape of any shred of color. (Believe it or not, these photos are all full color!) This is really boring, I said to myself as I traipsed around Mud Pond, hoping to spot ravens or eagles dining on the dead deer that someone had hauled out on the ice. Not even a crow could be seen. And the mushy snow made for hard going, either wearing snowshoes or without. So I headed up to South Glens Falls and the Betar Byway, a paved and plowed path along the Hudson, where the walking is easy and my friends Sue and Lindsey often have pretty good luck spotting eagles. 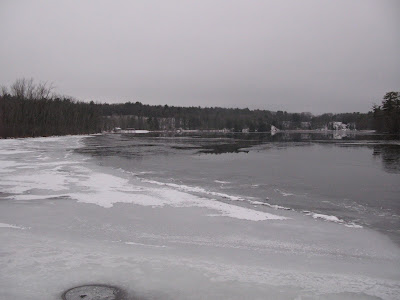 And today was my lucky day! It didn't seem so at first, as I scanned the dark river, rimmed with ice along the banks but wide open out in the middle. All was quiet out on the water. No avian action at all, not even a duck or a goose. Then I noticed a faint blob of white, high in a tree, on the other side of a bay. Here's a photo of what I saw, with the blob outlined and arrowed. Can you see an eagle there? 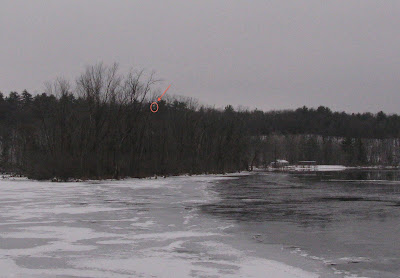 Well, I couldn't. Despite two surgeries this year, my eyesight is still messed up, so I can't quite resolve one clear image out of what my two eyes see. But I just had a hunch that that might be old baldy perched there, so I pointed my camera at the spot and zoomed my lens as far as it would go. I took the shot, then zoomed in again on the image on the camera's display. And here's what the camera saw. My hunch was correct. Hooray! An eagle photo at last! 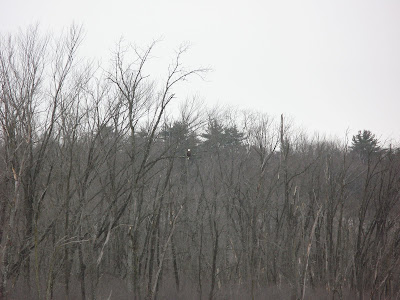 Here's an even closer view, made from cropping the image with my computer. Yes, the image is beginning to pixillate, but hey, not bad for a little pocket camera! It sure can see better than I can. 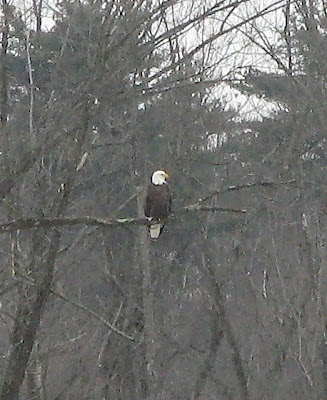 Posted by Jacqueline Donnelly at 4:41 PM

Excellent! Looks like a smaller male. That kind of sighting can make your date. I much prefer seeing a Bald Eagle as opposed to, say, a Great Horned Owl to whom, I always fear, I appear to be a tasty treat.

Huzzah !
So glad you finally saw one at that spot along the river. They have been hanging out there a lot, with all that open water.
I was over there yesterday, too - around 3:30 pm - & didn't see one -It was a very dark afternoon.

YAY I'm so glad you finally got to "see" it!!! And seems he or she LOVES that spot. To think I we may have never got a glimpse of these raptors if efforts weren't made to save them...

Hooray! An eagle for Jackie!