My friend Linda owns a small cottage on the Hudson River up in Warren County in the tiny hamlet of Riparius. Concerned that Monday's flooding might have caused some damage, she wanted to check on her place today, and would I like to come along? Well, sure I would! I'm always happy to spend a few hours wandering the Adirondacks with a good friend. Especially since she wanted to visit the Ice Meadows along the way. This is an area along the Hudson north of Warrensburg where the river ice piles up in particularly dramatic ways, and it was certainly doing that today. 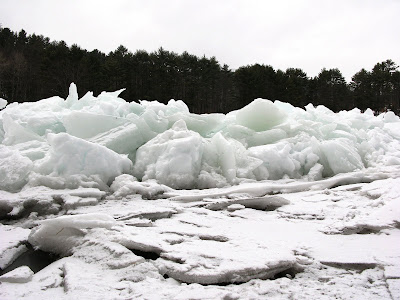 When we got to Riparius, the river was flowing free and fast, with hardly any ice at all, except where it had built up a bit atop the boulders that fill the riverbed here. 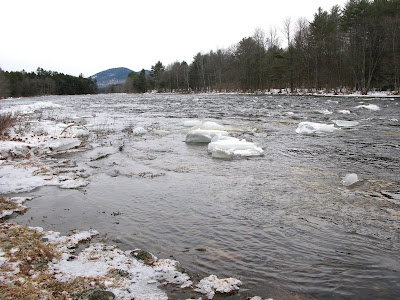 Here's a photo of Linda's little cottage. Isn't it cute? And just big enough for her as a quiet place of retreat, with the river rushing over rocks just beyond her porch. 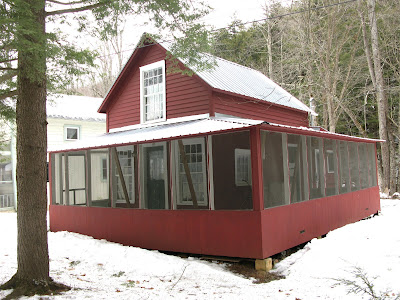 It belongs to a small community of cottages that were built as a Methodist summer camp many years ago. Many of the current residents are descendants of the original founders of the community, but today they do allow folks who aren't Methodist to purchase the cottages. The community, however, still holds the ownership of the land the cottages stand on.
After making sure no flooding or ice had damaged her place, we headed off to nearby Chestertown for lunch. Chestertown is a very, very small town, but it has a great place to eat lunch: the Main Street Ice Cream Parlor. Good food, indeed (I had a very tasty homemade cream of chicken soup), and housed in a handsome building. 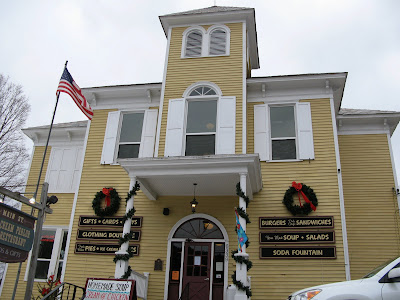 We could have hopped on the interstate there at Chestertown and headed straight home, but what fun would that be? Linda knows all the backroads and scenic byways between her place and Saratoga, so we went home the long way 'round. We followed the Schroon River through gorgeous forest scenery until we found another road that followed the Hudson to where it met the Sacandaga River. Then along dirt roads that followed the rushing river, and over an ear-popping mountain road that brought us out on Route 9N not far from Saratoga. The many roads home reminded us how blessed we are to live amid such beauty.
Posted by Jacqueline Donnelly at 10:54 PM

It looks like you had a wonderful road trip. The weather was fairly pleasant yesterday to do some traveling.

Thanks for stopping by my Troutbirder II blog. its usually bood and movie reviews and some bad jokes. I don't usually do politics and religion but as you could tell I was really annoyed that day. I'm glad you did though and I really enjoyed finding your nature blog. I do have another blog where I focus entirely on the great outdoors. Stop by sometime. :)

'Sounds like a great trip! 'Sure is a cure cottage Linda has got there!
Love those pics of the ice pileups.