We're Off to See the Orchids!

Did we have a gorgeous day to go finding that Round-leaved Orchid in bloom?  We certainly did, my friend Bob Duncan and I, a day as close to perfect for hiking a trail to an Adirondack Pond as a day could be:  fresh and cool, while also bright and sunny.  It was as fine a day for picnicking  on the shore of this pond as it was for botanizing. We had walked this same trail last Saturday, when we found a number of budding stalks of this Round-leaved Orchid (Platanthera macrophylla), and today we found them in perfect bloom.  Unfortunately, the largest specimen of those we had found last week was bent and fallen today, possibly a victim of the same ferocious winds that had toppled many trees in the area on Tuesday night.  Here, Bob is holding the stem erect so I could photograph what it would have looked like before it suffered damage.


There were others in the same area that had survived without damage, and they, too, were in perfect bloom, with every floret along the stalk fully open.


A close look at the floret reveals the very long lower lip that distinguishes this greenish orchid.  The pale-yellow swellings seen in this photo are the flower's pollen bundles, called pollinia. 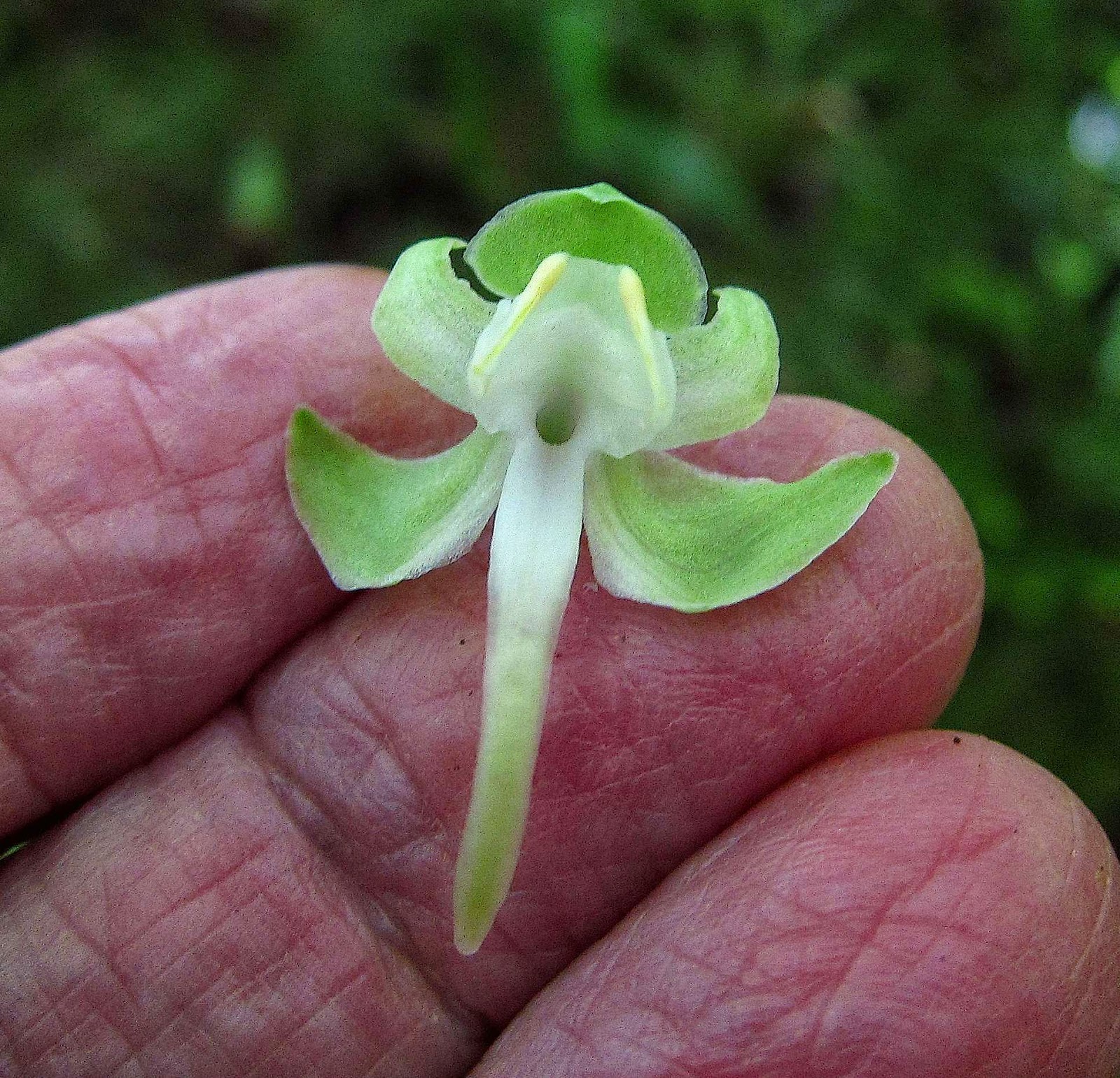 A profile shot of the floret reveals the very long spur that helps to differentiate this orchid from the very similar, but slightly smaller species of Round-leaved Orchid called P. orbiculata , which has spurs nearly half as long.  Looking at this photo now, I am noticing how twisted the ridged flower stem is.  I wonder if this is true for both species of Round-leaved Orchid.

With so much rain of late, it was not surprising that we found a number of fungi today, including this very handsome mushroom called Graceful Bolete (Austroboletus gracilis), which is often found fruiting under hemlocks, as it was today. 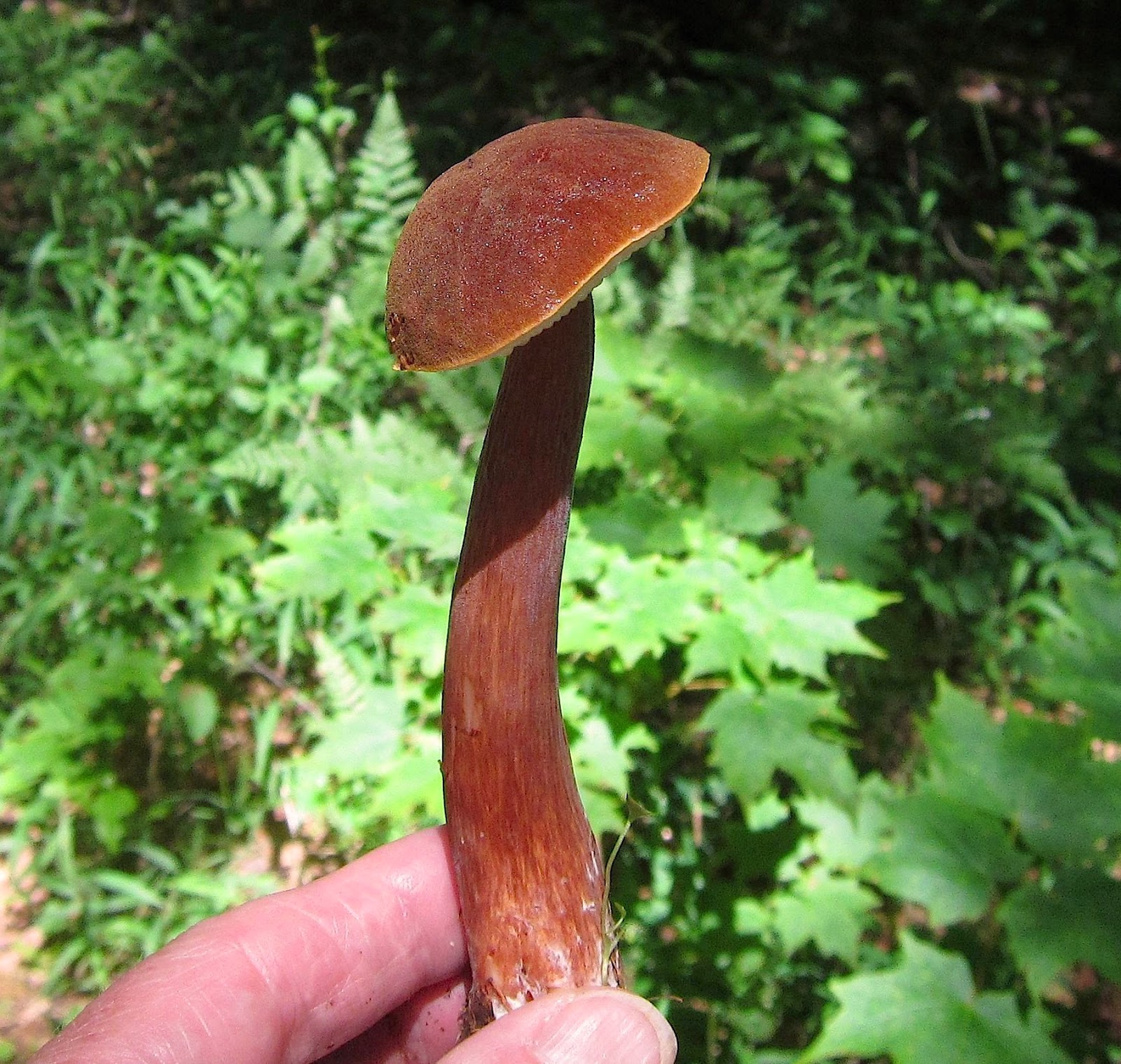 The whitish underside of the cap reveals the pore structures that are typical of all boletus species, but I had never seen a boletus weeping small droplets as this one was.  When I looked at photos of this species online, I noticed several images revealed a similar weeping.  Note that this mushroom has a long stem that is colored the same as the cap, and I noticed that it had a subtle bloom that gave it a velvety appearance.  A beautiful mushroom that easily deserves its name of Graceful.


Well now, this was a big surprise!  How could we have missed seeing these vibrant Canada Lilies the first time we passed this way?  But we sure did.  We were on our way out and almost all the way back to our car when we spied the brilliant orange bells hanging right over the trail, lit by the sun so they glowed like Japanese lanterns.  A fitting end for a beautiful day in the Adirondack forest. 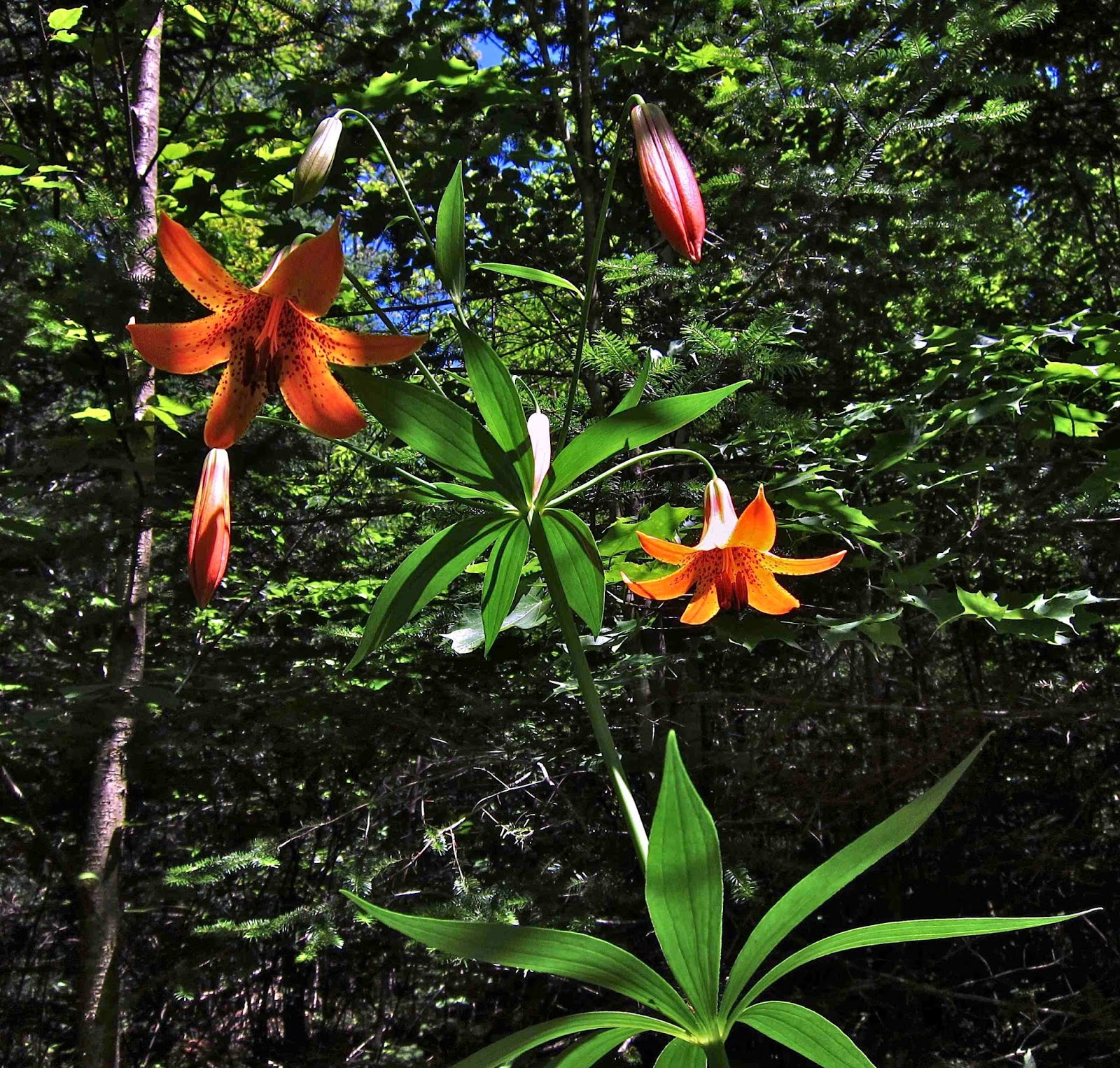 Posted by Jacqueline Donnelly at 11:19 PM

How exquisite, Jackie! I hope to see this species one day and am so happy you got to lay eyes on it. It definitely has a larger gestalt to it over P. orbiculata. Those spurs and leaves are huge!