It couldn't have been more uncomfortable weather yesterday -- miserably hot and humid with impending thunderstorms.  This was not the nicest of days to escort noted wildflower photographer Carol Gracie to the sun-baked powerline clearcuts where the lilies grow.  But this was her chance to photograph the magnificent Wood Lily (Lilium philadelphicum) in its native habitat, and Carol, author of the beautiful volume Spring Wildflowers of the Northeast, needed these photographs for the new book about summer wildflowers she's now working on. And it just so happened that she, her husband Scott Mori, and a young Taiwanese botanist were passing within a mile or so from this site on their way up to the Adirondacks from Carol's home in Westchester County. So could I show her these lilies that I'd featured on my recent blogpost?  Well, I sure could!  And I was delighted to do so.  Nothing makes a wildflower enthusiast happier than sharing the bounty with a kindred spirit.

As luck would have it, the lilies were just as beautiful, if not even more so, than when my friend Sue and I had found them on the previous Sunday morning.


As luck would also have it, blooming nearby was another summer flower, called Greenish-flowered Pyrola (Pyrola chlorantha), that turned out to be a flower that Carol had never encountered before in all her extensive botanical explorations. 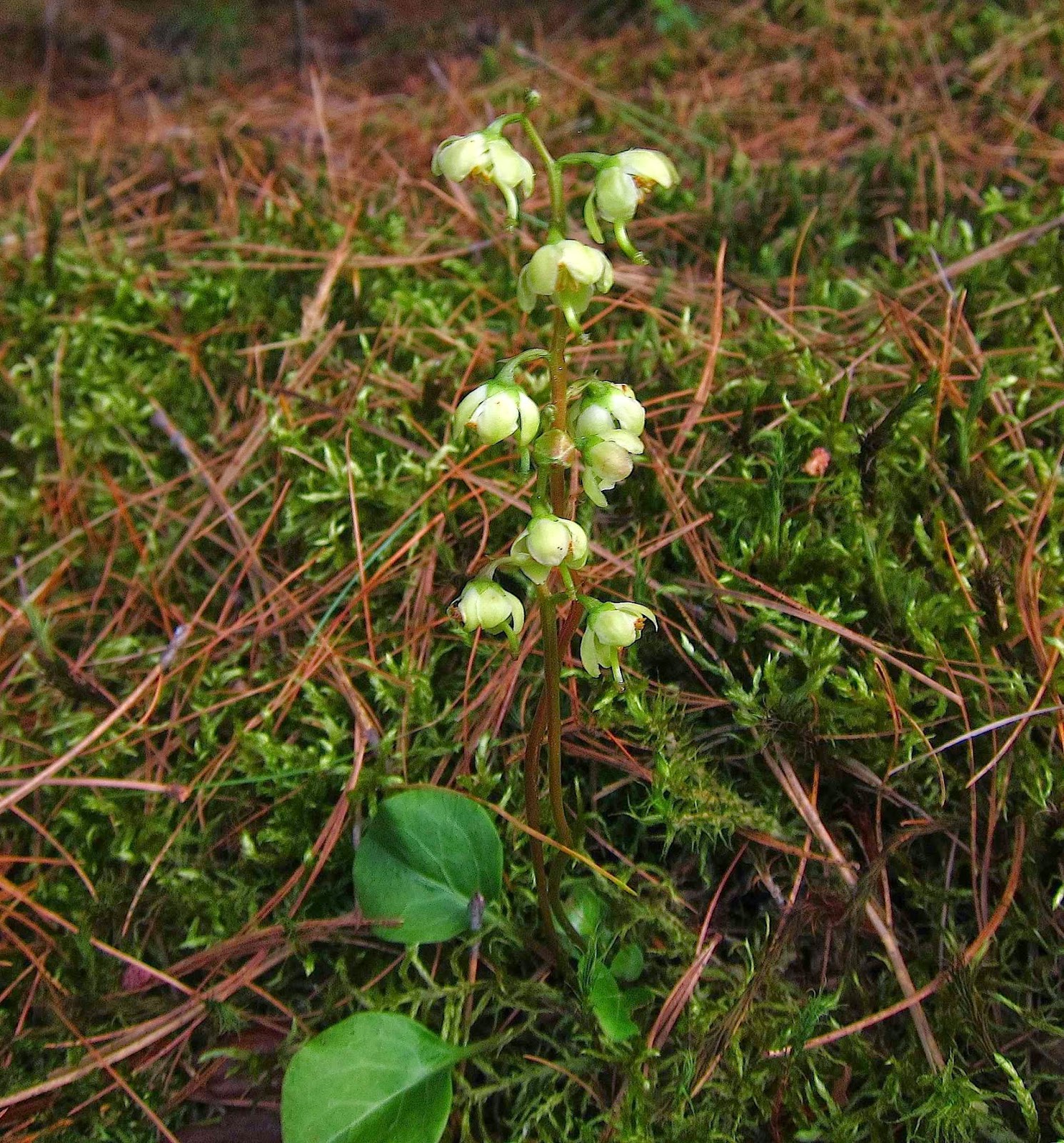 Imagine how pleased I was to be able to introduce a new plant to this wildflower expert, the co-author of the comprehensive Wildflowers in the Field And Forest: A Field Guide to the Northeastern United States and a naturalist who has spent decades of botanical exploration in the U.S. as well as South and Central America.  Greenish-flowered Pyrola is not a rare flower in New York, but this small plant would be easy to overlook or mistake for the even more common Shinleaf Pyrola, which has similar but whiter flowers and leaves that are larger and longer.  All the Pyrola-family flowers deserve a closer look, to observe the distinctive tubular structure of their reproductive parts.

Carol was taking a closer look at this Common Milkweed flower and discovered not just one, but two Skipper butterflies had been trapped by the distinctive structure of this genus's florets.  All flowers in the milkweed genus (Asclepias) achieve pollination by entangling the legs or mouthparts of visiting insects with pollen bundles accessed through slits at the base of each floret.  The snagged insect must jerk free, and in doing so, it carries the pollen bundles away to other flowers.  But not all manage to free themselves, as this poor little butterfly demonstrates.  We might have tried to free it, but it was already dead.  So was the second one, which appeared to have been trapped by its tongue.  So sad!


Scott, Carol, and their friend Ya-yi prepare to continue their journey northward, just before a torrential rainstorm arrived from the south.  We were lucky to have completed the photography work before the storm hit, but we weren't too worried about getting wet since we were already drenched with sweat.  I guess what they say about mad dogs and Englishmen applies to wildflower enthusiasts as well.  We sweltered under a noonday sun and loved every minute of it! 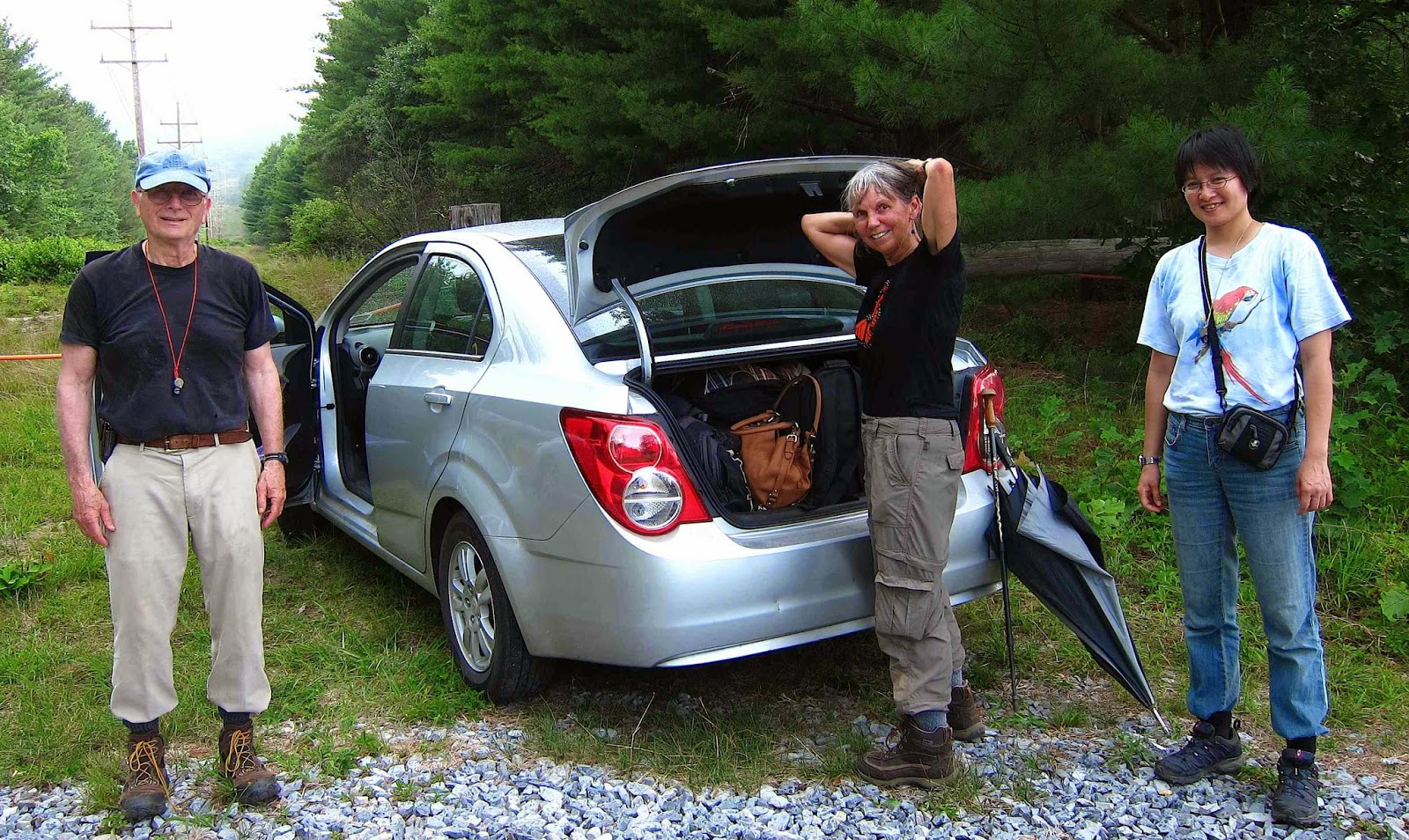 Posted by Jacqueline Donnelly at 10:16 PM

I've led some people on wildflower hikes, but never such a noted one. Very cool. I've never seen that pyrola either.