A Perfect Day for Orchid Hunting 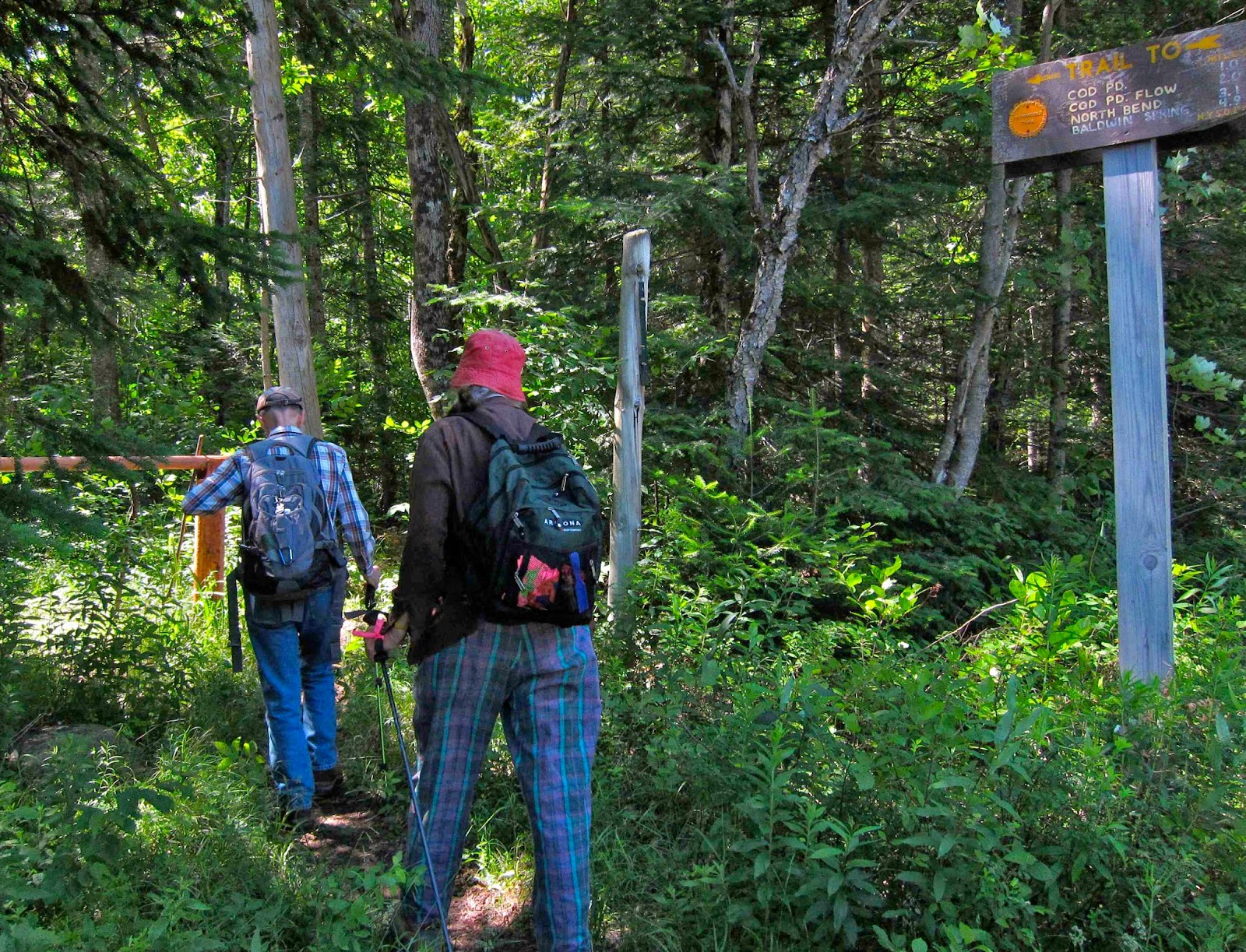 What is so rare as a day in July that is just as perfect as that proverbial day in June?  That's the kind of day we had Saturday, sweet clear air, sunny and bright in the sun, refreshingly cool in the shade, just perfect for a hike through an Adirondack forest in search of orchids and other discoveries. I had asked my friends Evelyn Greene and Bob Duncan if they knew where I might find some Round-leaved Orchids (Platanthera macrophylla), and of course, they did.  I think they know every inch of our part of the Adirondacks, having plant-hunted here for many decades together, so they knew exactly which trail we should take and just about exactly how far we should travel along it.  So Bob and Evelyn led me there.

Sure enough, when we reached the site that Bob had scouted the week before, there were our orchids, with big flat shiny round leaves that definitely live up to the billing both the common and scientific names provide.  (Macrophylla means "big leaves.")

As orchids go, these leaves were HUGE, 8 inches long by 7 inches across.  I could not even cover them with my hand.

There are two species called Round-leaved Orchid that grow in our area, P. orbiculata and the one we found, P. macrophylla, and the two are so similar it is very hard to tell them apart.  One distinguishing feature is the length of the flower spur.  Even though the orchids we found were not yet in bloom, we could find the spur and take its measurement, as Bob is doing here.

Evelyn told me that her sources confirm that any flower with a spur over 28 millimeters will be that of P. macrophylla.  Our orchid's spurs measured around 40 mm., so there appears to be no doubt about our orchid's identity.


We were a bit disappointed that our orchid was not yet in bloom, but that just means we shall have to return to this beautiful woods next week.  In the meantime, we enjoyed looking around at other attractions, including one of the biggest, prettiest patches of  Fan Clubmoss (Diphasiastrum digitatum) we had ever seen. 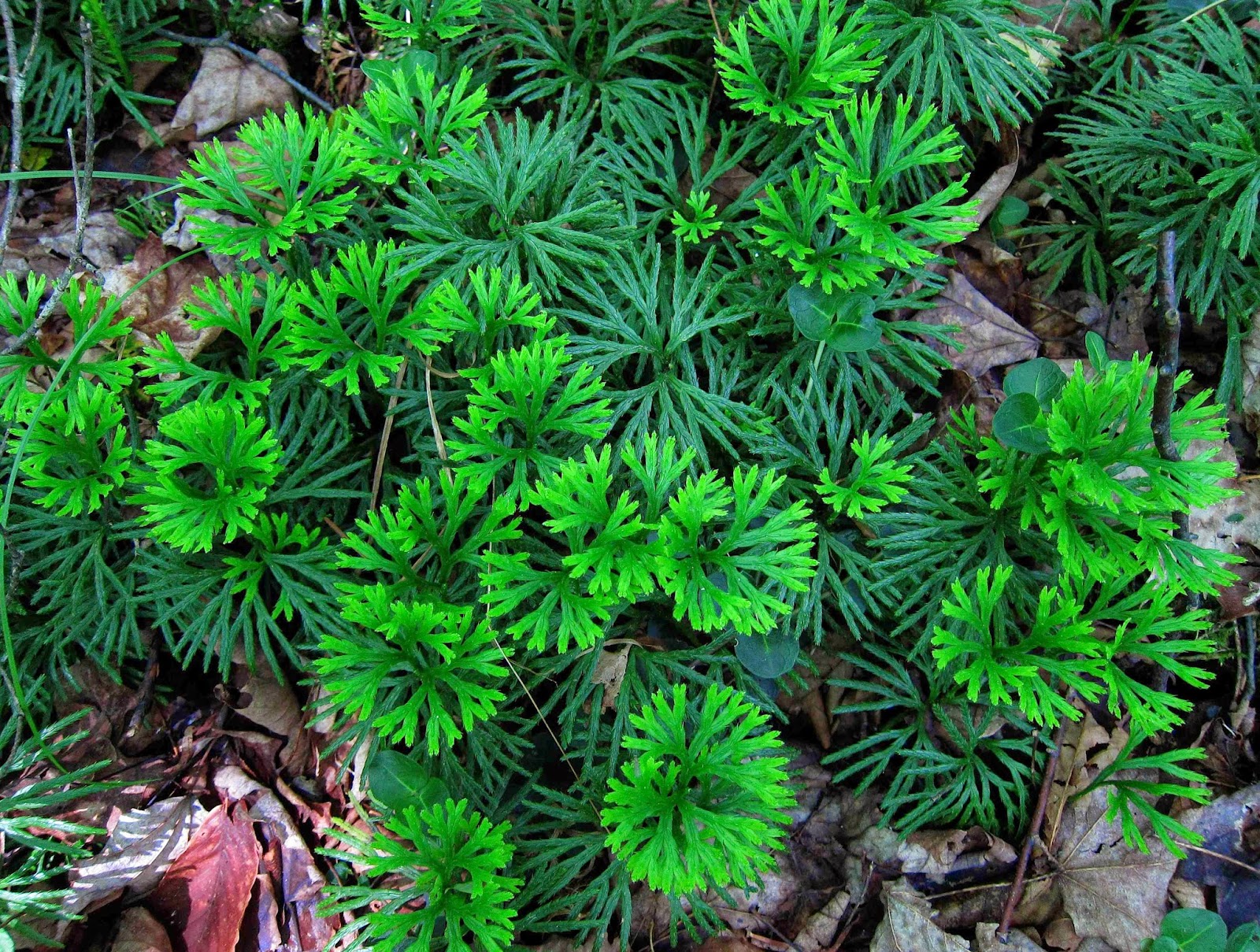 We were constantly serenaded by birdsong, including the sweet sibilant song of a Swainson's Thrush, which Evelyn described as sounding sort of like the Veery's spiraling song, only upside down. Here, she searches the branches for the source of this melody. 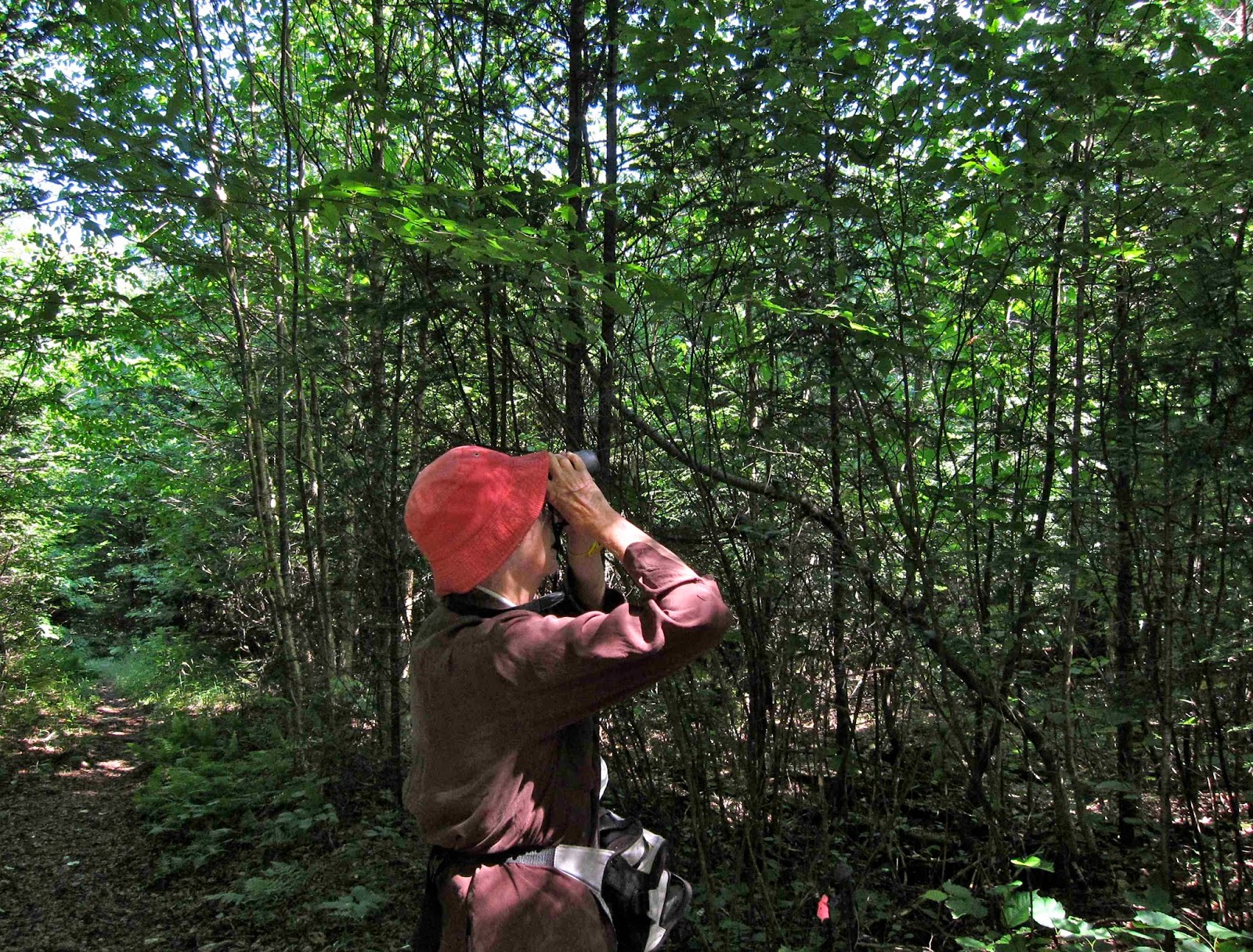 The day was still young and our next destination not far away.  Bob and Evelyn remembered once finding a rare moss and also a rare liverwort near Auger Falls on the Sacandaga River, not too many miles west of where we had started our day, so that's where we ventured next.  After turning off NY Rte. 8, we followed a snowmobile trail across the East Branch of the Sacandaga, and here we stopped to enjoy a picnic lunch.  This is the view from the bridge.


We found some places to sit in the shade, while the river below sparkled in the sun. 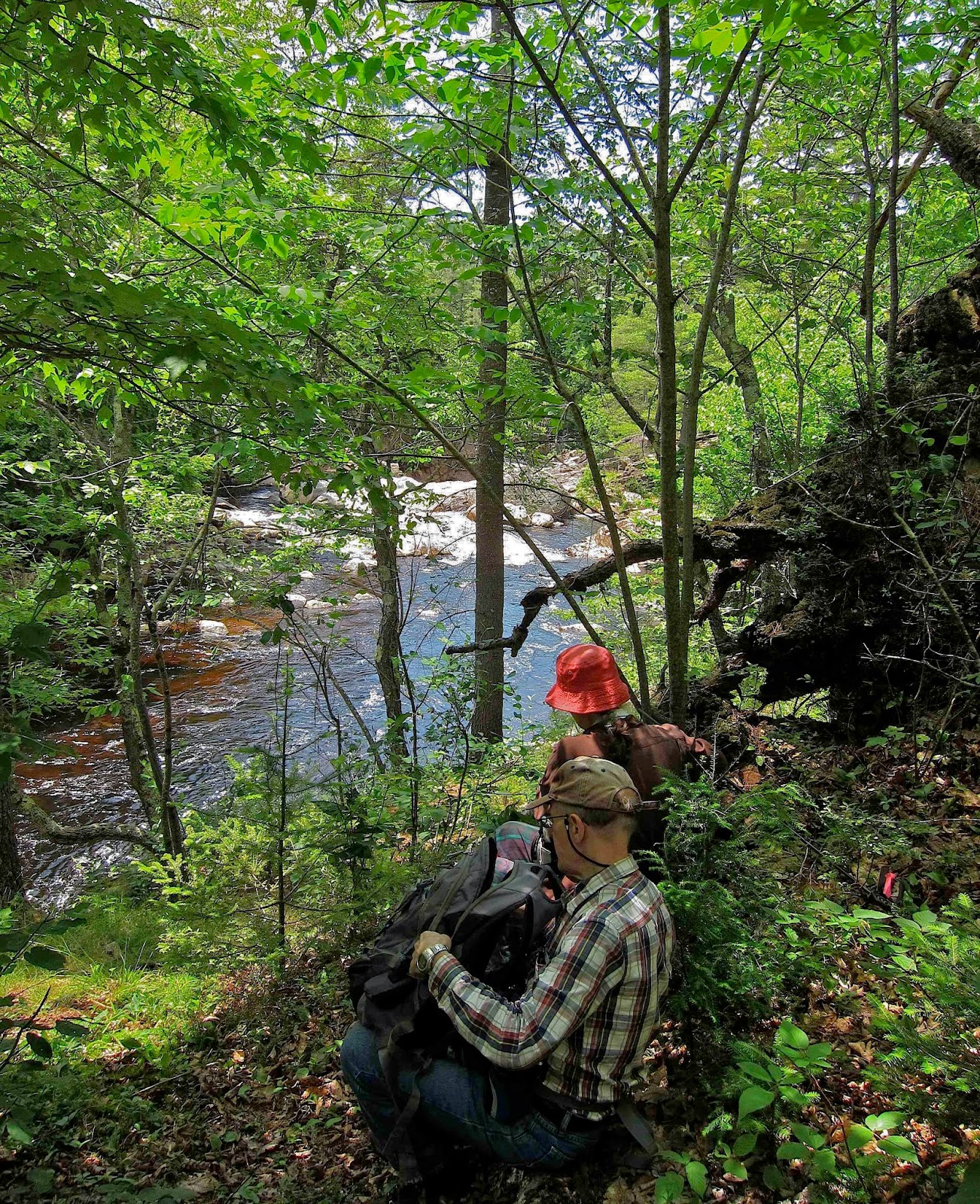 This is the view of the East Branch of the Sacandaga from the bank where we sat to eat.

We walked an easy trail about a mile and a half into the forest before we could finally hear the roar of Auger Falls, and then we made our way through the woods to enjoy this scenic view.  This is the Sacandaga River proper, which the East Branch we crossed earlier is on its way to join. 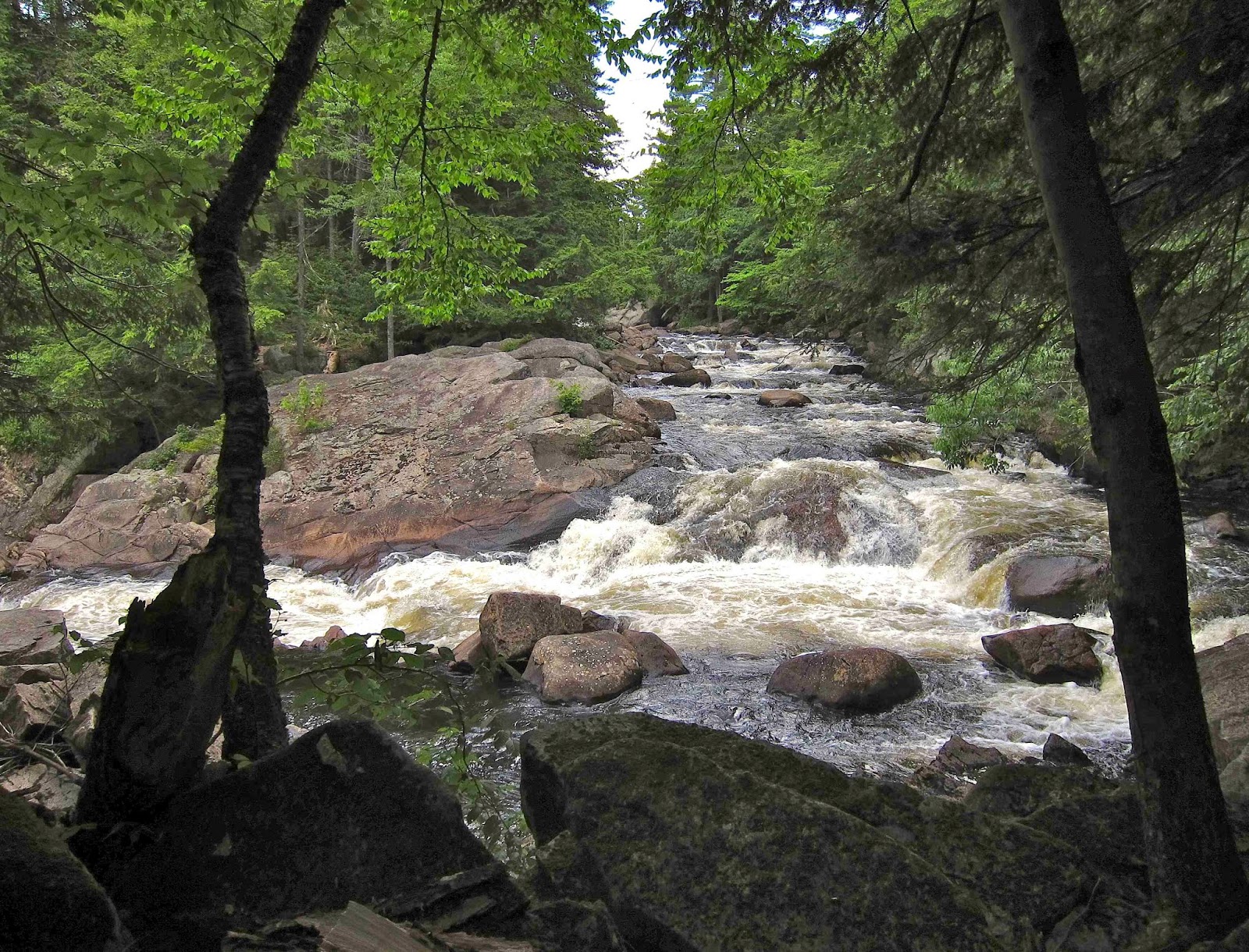 As it turned out, neither Bob nor Evelyn could quite remember where they had found those rare plants, although they spent quite a while pushing through spruce-prickly, rocky ravines in the hunt for them.  But then, it had been some 28 years since they first discovered them, so it's possible they were no longer here.  Finally, far astray from the official trail through this woods, we bushwhacked our way in the general direction that would take us home.  Yes, I felt some relief when we finally climbed from the brushy woods to the gravel road, but I never doubted that Bob and Evelyn would find the way. 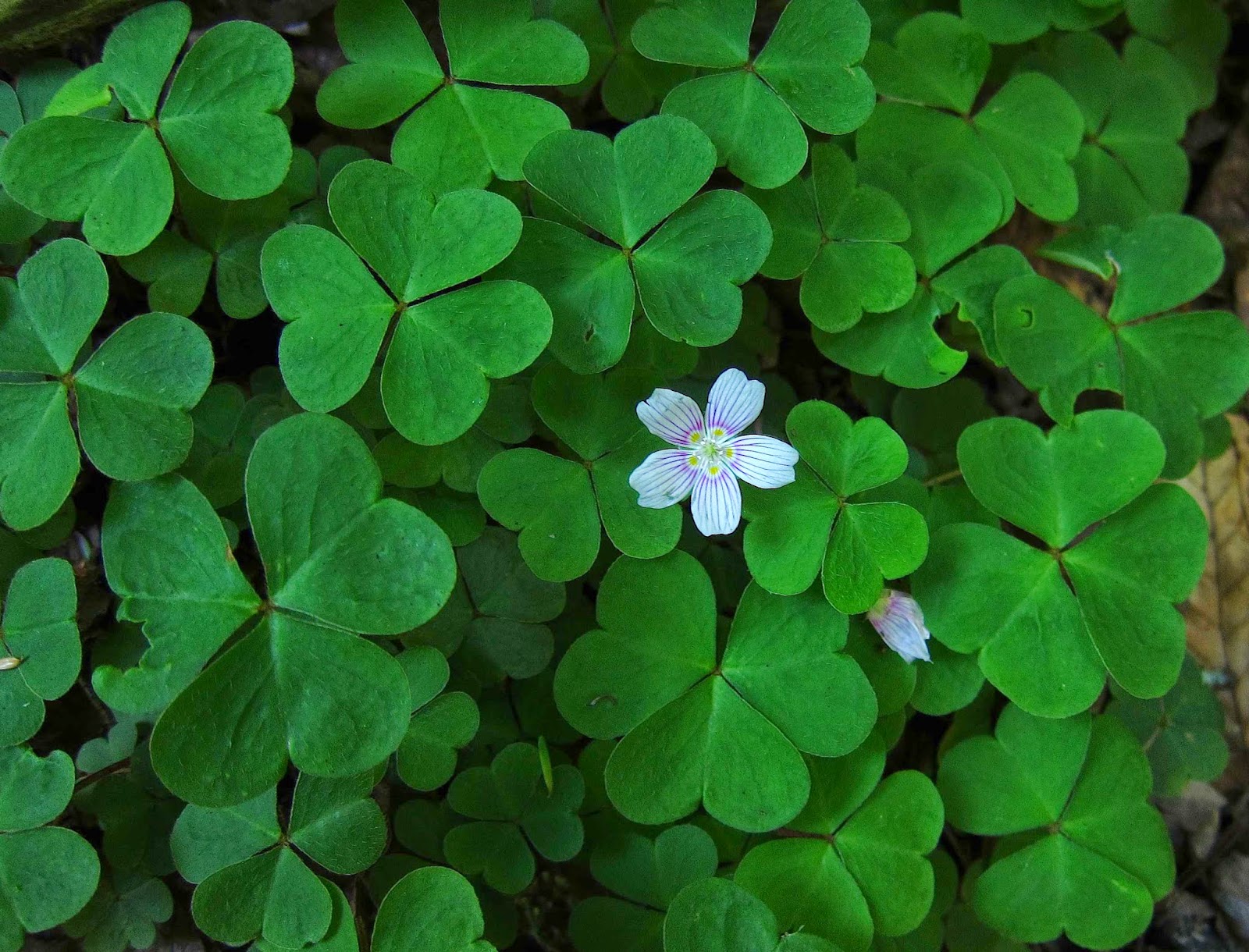 In the darkest parts of the woods, White Wood Sorrel (Oxalis montana) decorated our path with its lovely pink-veined white flowers.
Posted by Jacqueline Donnelly at 6:05 PM

Wonderful places! I went orchid hunting on Tuesday. Just for Goodyera pubescens, but I haven't caught it in flower yet. Know I was in the right place, couldn't find a trace of leaves, stems, anything. Hmmm.

Sharkbytes, you have my sympathies. I know where several patches of G. pubescens grow, but years can go by between flowering, and sometimes the plants just disappear. Orchids can be really fickle about blooming.