A beautiful snow started falling around noon today, but by dinnertime rain had turned it to slush. Darn! I couldn't get to the woods this past weekend because of a houseful of guests, so I was really looking forward to a snowy hike tomorrow. Oh well. Who knows what the weather will do overnight? 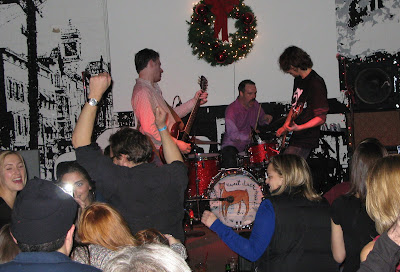 Anyway, even if I couldn't get out to the woods, I did get out to engage in some wildlife last night. Now, I know I'm an old lady and yes, I love classical music and all, but the music that really fills me with joy is good old-fashioned loud and rowdy rock 'n roll. And nobody plays rock 'n roll rowdier than my own son's band, The Figgs, who roared through the area this weekend, playing in Albany Friday night and in Saratoga on Saturday. These three guys have been playing together about 20 years, putting out album after album to critical acclaim, and touring all over the country. Once called by Guitar magazine "the best rock 'n roll band in America," they don't often play close enough to my home for me to get out to hear them. But the club they played in last night -- Putnam Den -- was just two blocks from our house. So yeah, I was there, and Wow! What a show they put on! 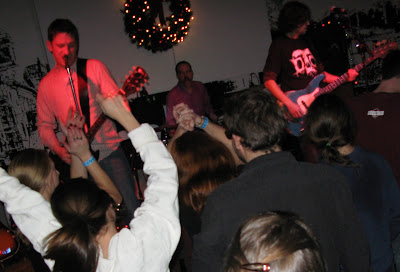 The club was filled with an enthusiastic crowd, who danced and cheered and gleefully sang along to the songs they already knew by heart. I wondered how they found out about this Figgs gig, since I didn't see anything about the show in the local papers. When the band plays in New York City, there's almost always something about them in the New York Times or the New Yorker magazine, but when they play in their old hometown, the local papers ignore them. But somehow their loyal followers found out (they probably check the band's website or their myspace page), and a rowdy good time was had by all. Including me. There's no better way to work up a sweat than dancing to great rock 'n roll.
Well, maybe snowshoeing through deep fresh powder comes close.
Posted by Jacqueline Donnelly at 7:41 PM

My god, that show was SO good. I was out on the Betar Byway humming Figgs songs to myself today. Also, my buddy Annaliese, the girl standing next to me last night, had never heard of them before and is now a new fan, she had an absolute blast. If anyone thinks you're saying no one plays rowdier R&R than the Figgs just because it's your son's band they are sadly mistaken!

This weather of late (and the holidays) has really been making me unhappy, I've had a hard time getting out there to bird. I pushed through the first 55 minutes of snowfall today just so I could get a walk in! Good thing I love birds so much that they make it easy to mostly ignore how painfully cold it is!

Seriously? I'm so disappointed I missed the show. I didn't see anything in the local listings.

Lindsey: I'm so glad you enjoyed the show. The joy folks were feeling was palpable, wasn't it? I love how they interact with their audience, coming right down onto the floor, getting the group to sing the choruses, and behaving like they're having as good a time as their fans. I'm mighty proud to be their mama.
Regarding the weather: Do you have the right clothes? Meaning long johns, polar fleece, wool socks, ear covering, mittens? If you wear the right gear, you'll hardly feel the cold. Sort of.

Hey Kurt, sorry you missed the show. As I wrote in my post, the local papers ignore them, even though they're now a national act. Pete Hayes and family stayed with us for the weekend. You should see their baby girl, Ruby Saratoga, looks just like her daddy. Only prettier.