I took a walk around Mud Pond today and was surprised to see it nearly covered with ice. Just two days ago it was still wide open. 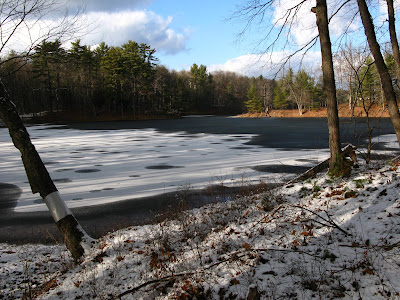 Granted, that ice was really thin -- thin enough that the beavers could still swim through it, making channels near their lodge. 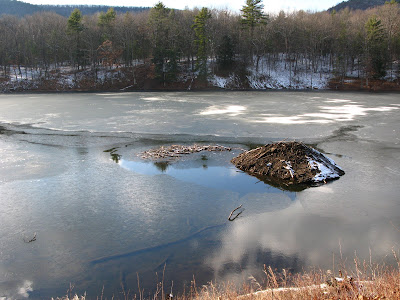 I'd been watching young trees disappear all autumn, as the beavers dragged the limbs away to store underwater for winter food. But I was really surprised to see this recently-downed hemlock that had fallen across the path. I don't believe I have ever seen beavers topple a hemlock before. And they obviously have not chomped off any limbs to drag down to the pond. I'll be watching over the coming week to see if they return to finish the job. 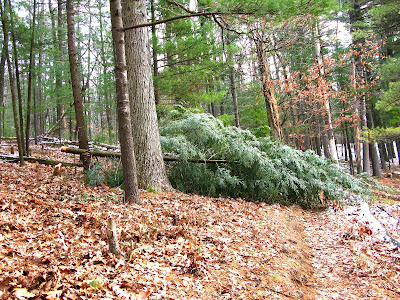 I had hoped to find some animal tracks in the thin snow cover, but the surface was all pocked by the snow falling out of the trees, so I couldn't make any out. Not even a mouse's. But down by the shore of Lake Moreau I found this heap of downy feathers -- a lot more feathers than a goose would pull out while grooming itself. 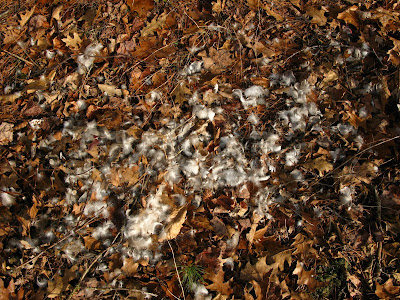 In fact, there were several heaps of feathers, and I followed the heaps until I found the dead bird itself. Very strange! It was missing its head, but I couldn't find any stump where its head had been. There was some bloody mess underneath, but I didn't examine the gore too closely. There's a lot of this goose still uneaten. I wonder if its predator will return to finish it off? 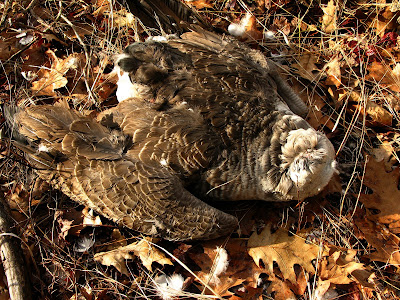 When I started around the pond today, the wind was still, the sky was blue, and the new ice sparkled brightly in the sun. After a while the wind picked up and dark clouds moved in, covering the sky completely. The light on the ice took on a cold steely hue. Brrr! I truly love winter, but it seems I've not yet developed the internal thermostat for it yet. 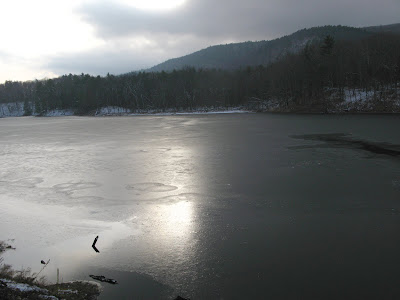 I hurried home to a hot cup of tea and a pile of cats on my lap as I dozed on the sofa. Some of winter's delights take place indoors.
Posted by Jacqueline Donnelly at 10:30 PM

I love the beaver trails in the thin ice, it's so exciting to me to see evidence of the activity of these fairly elusive animals.

There were large patches of mostly submerged ice floating on the Hudson this AM - they weren't there last night. Winter has arrived with a vengence, eh?

What a cool photo of the beaver trails through the skim ice!

The whole post was great (as usual), but i love the last 2 sentences and am in total agreement. ~nutmeg.

Dear Jackie and Ellen and Carolyn and desertnutmeg: you guys are so cool to stop by and take the time to leave your comments. I really love hearing from you!

So funny how we can be in the park at around the same time and never come into contact with each other. I went on a bird walk in Moreau on Tuesday and made it to Mud Pond over by the nature trail (the part that heads to the trail through the woods back to the Beach). I'll be posting my adventure soon!

Oh and the goose, I got a little hungry and was not having much luck finding wintergreen berries. I was trying to save the rest for my next bird walk. Hahaha just kidding.