Yes, Virginia, There Was a Baby Jesus 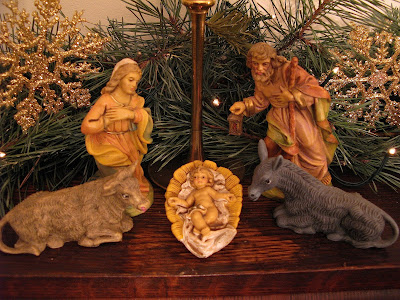 Christmas Eve. The time has arrived to deck the halls and light the lights and arrange the creche sets in their places of honor. What a beautiful story they tell, even to those who cannot believe that Jesus was divine, or even to those Christians (like me) who turn to these infancy narratives more for their symbolic truth than for any historical fact.
Here's a tale about how God comes to us wherever we are and in whatever circumstances we find ourselves. Whether Mary actually gave birth in a stable or not, it doesn't matter. We who have endured the duress of childbirth can imagine how terribly stressful that would have been. My creche sets show Mary all clean and combed, with her flowing robes pristine. How was she able to take a bath in that barn? Our hearts go out to her -- and to all who suffer, frightened and filthy and far from home. And what does the image of baby Jesus, lying there where the animals feed, tell us about where God can be found? Right there (right here!) among the earthiest of all God's creatures, in whatever kind of shelter we can find.
Religion and its accretions have prettied up this narrative so, that I think we forget what low-lifes most shepherds were at the time when Jesus was born. Pretty much the dregs of society, no doubt, and they probably smelled bad, too. (Like the homeless guys who hang out in the library, getting warm.) The notion that God would send angels to them, that they would be the first to know about such a miraculous thing -- it's just too unlikely, isn't it, to be believed!? Unless God was trying to tell us something about the least of our brethren. 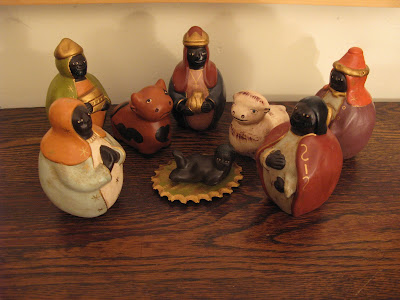 And what about those Three Kings? Can you imagine how surprised they must have been, to find not a prince in a palace but a little babe in a humble home? They came all that way for this? And what use could the infant Jesus have possibly had for gold, frankincense, and myrrh? Could it be they were symbols of the wealth and power and pomp that the grown-up Jesus had no use for, either?
As I said before, it's a wonderful story -- even better, I think, than the one about Santa Claus, the Santa that one little girl named Virginia was once reassured was real. Well, I love the story about Santa, too. So I have a little shrine set up for him -- albeit with a few accretions that reflect my own heart's desires: note his lightweight canoe and abundant woodland friends. 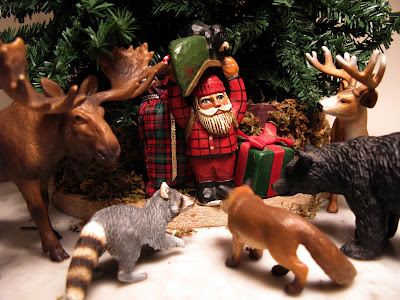 Merry Christmas to all!
Posted by Jacqueline Donnelly at 1:52 PM

The Adirondacks Santa woodland scene is so awesome! I have always thought Santa would be right at home up in the mountains in upstate NY where it's spruce-fir forest.

I love your Santa with the canoe -priceless!