Ice-over Begins on the River 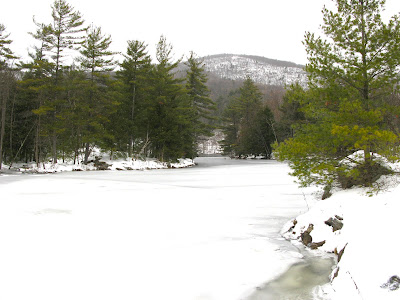 Today dawned cold with the promise of snow, and I couldn't wait to get down to the river and check on the ice situation. Since my paddling days are done for the year, the next best way to get around on the river is walking on frozen water. But as I discovered, I'll have to wait a while. The coves and bays behind Beaver Island were covered with ice, but it's not thick enough to walk on yet. The main river is still wide open. Nevertheless, the winter has come at last. Quite a change from just three weeks ago when I took my final paddle of the season.
Here's what the river looked like then: 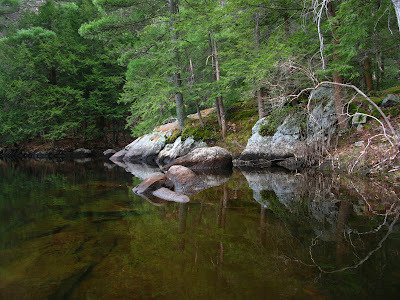 Some of the ice formations are really beautiful. At the edge of a running stream, thin ice took on the form of angel wings. 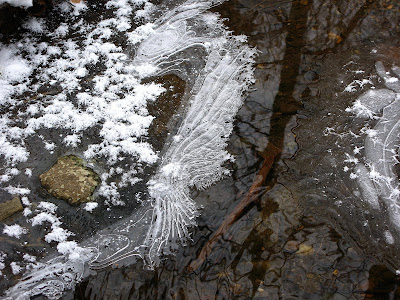 And here by a bank, the shape of wavelets was preserved as the water froze, the ripples outlined in snow. 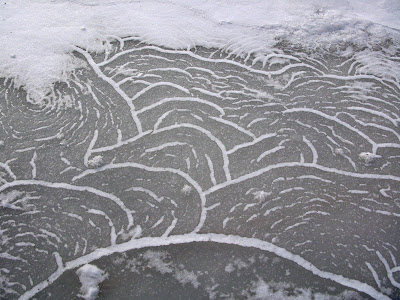 There were lots of tracks in the woods today, but the snow was very grainy, obscuring any detail in the prints. These were about the clearest prints I found, little feet all bunched up in a clump, and leading down to the water. What do you bet they're a mink's? 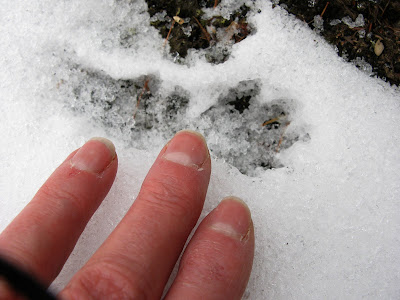 I made my way through the woods to the shore of the bay surrounding Three Pine Island. Sure enough, that bay was frozen, too, if only thinly. This bay and the marsh behind the island is wildlife Grand Central Station in winter, with all kind of tracks criss-crossing the snowy ice -- coyote, mink, otter, bobcat, fisher, fox, rabbit, squirrel, mouse, vole -- and wingprints from eagles, ravens, and other birds coming in for a landing. The ice will have to be much thicker before Moreau Park naturalists start dragging out road-kill carcasses to serve as feeding stations for observing bald eagles. 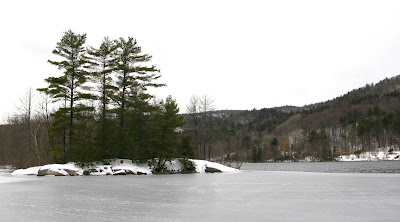 I nearly tripped over this carcass on shore -- a frozen-solid snapping turtle. In fact, I kicked it over from where it lay on its back. What the heck could have happened to it? Aside from my own, I found no tracks leading up to or away from its corpse. Could it have dropped from the sky? (Do eagles eat snapping turtles?) Or did it meet its demise before the snow fell? That seems more likely, since it was covered with snow when I tripped over it. And when do snappers hibernate, anyway? This guy would be safely buried in mud by now, if alive. So maybe this carcass has been here for quite some time. 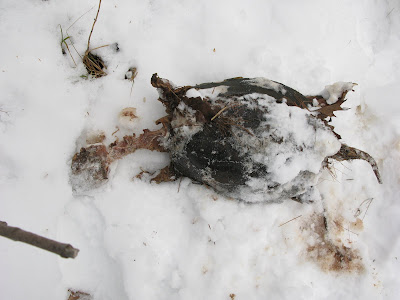 Most of the flesh on its neck was missing, as were pieces of its feet. Some critter must have been eating it, but what critter would take on a snapper in battle? Or maybe it died a natural death, and carrion-eaters found it after it died. It will have to remain a mystery, will it not?
(Sorry to present two posts in a row with photos of dead animals. But this turtle presented such a puzzle, I couldn't ignore it.)
Posted by Jacqueline Donnelly at 10:15 PM

Mine, however, will be more relevant! Like you, I suspect your turtle has been deceased for a while. It may have died a natural death (we've all gotta go eventually). And there are certainly plenty of scavengers around to take advantage of such a find (coyote, raccoon, fox, bobcat...). As far as I know, eagles don't actively hunt snappers, but I suppose anything is possible (there are just varying degrees of probability).

Ohhh the frozen wavelets photo reminds me of Tibetan drawings of clouds !
Not sure an eagle would be carrying around a snapper - unless it was a small one. Turtles are built pretty heavy.
But any number of predators could take advantage of the situation on the ground, after the turtle's demise.
Grand Central Station ! you bet !
What a great spot, any time of year.

Ooh, I really like these ice photos. The bit of snow on them brings out the textures. Looks like snow this weekend here again, too. As long as it's not ice, I'm a happy girl.

Your photos are really nice. I especially like the first one. It would make a nice Christmas card.

Hello Ellen and suep and Carolyn and squirrel! I do so appreciate your leaving the comments you did. I feel really pleased to be able to share my adventures with you and hear your opinions and suggestions. That's what makes this blogging business so much fun.

I totally agree about sharing blogs. I feel like I have made 4 new friends.

Can't wait to get out there on that bay on snowshoes with you!