Here's an odd-looking plant you won't find very often around these parts, that is, in the northeastern states. I first saw it a few years back, these bushel-basket-sized, frizzy-haired green bushy plants growing in a sandy lot just east of Saratoga Springs. 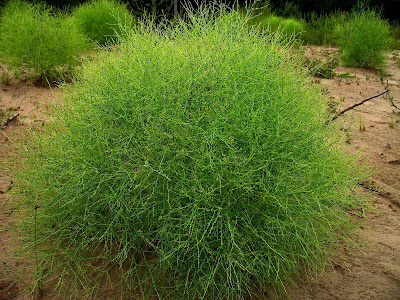 What the heck are these things? I said to myself as I searched through all my field guides to no avail. Problem was, my guides covered the flowering plants of the northeastern U.S., and these plants are native to the central states. I discovered this fact while thumbing aimlessly through Volume II of Britton and Brown's Illustrated Flora of the Northern United States and Canada, the bible for serious botanizers (which I was not). There on page 16 I happened upon a drawing of this odd plant and learned its name at last: Winged Pigweed (Cycloloma atriplicifolium). 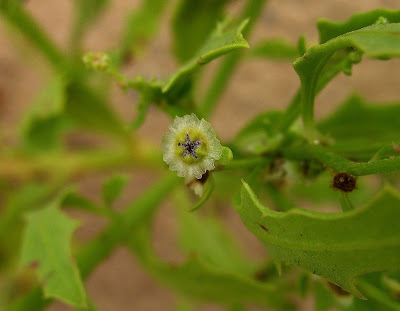 In this close-up photo you can see the wing encircling the fruit, and a five-lobed calyx forming a tiny star in the middle. According to Britten and Brown, this is the only species of its genus (it belongs to the Goosefoot, or Chenopodium, Sub-family), and its territory was limited to north central North America.
Well, that may have been true in 1913 when the second edition of this magnificent three-volume work was published. But the plant has since spread those tiny wings and made it all the way out here to Saratoga County, where I have found it two other places since. Well, no, that's really a false image. It doesn't spread its seeds by flying. It actually gets around by rolling around, those bushy stems breaking off from their central stalks and tumbling across the fields, propelled by the wind, dropping their seeds as they roll.
Before they grow brown and brittle and break off, they turn a really gorgeous shade of purple. This photo was taken two years ago on September 25. 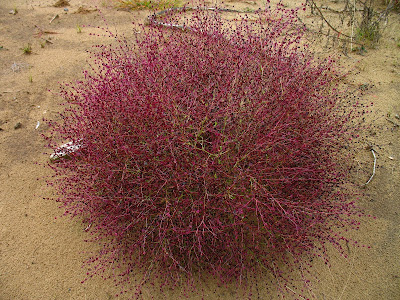 So keep your eyes peeled for big purple Afros popping up in open sandy fields. This week I returned to the site where I first discovered them, and I was dismayed to see that just two plants remained. Must be they've all rolled away to places unknown to me. But I think they'd be really hard to miss if I pass where they're growing now.
Posted by Jacqueline Donnelly at 1:46 PM

Ha Ha! Swampy, I'll bet you're not the only one to come up with that. It would even be somewhat close to the truth, because when these fat roly-poly tumbleweeds go flying down the road on the wind, they do kind of remind you of what pigs might look like flying.

HM...what an interesting plant! Should we add it to the list of invasives? Maybe it's not too ambitious and is inclined to stay in highly specialized sandy areas.

A good question, Ellen. All three of the places I found it were disturbed soil sites, possibly with imported fill, which may have contained the seeds. The sandy lot where I took the photo had many plants three years ago, just two this year. I saw the tumbleweeds rolling about that first year and expected to subsequently see the plant along the roads, but never did. It disappeared from the other two sites I found it, both being sandy roadsides. So it doesn't seem to be aggressively invasive, at least around here.