A Walk Through the Photo Files

Grandbabies are grand! I truly adore them. It's just that each time they visit, I seem to catch their colds. I suppose that's because I refuse to refrain from kissing them, no matter how runny their noses. Three were here last weekend, so by Wednesday I started sniffling and today I'm really miserable. Plus it's raining. No trips to the woods or the waterways today. So back to my photo files I went, to see what in other years was growing out there this week. Lots of good stuff. Here's just a sampling.
Winterberries (Ilex verticillata) are turning a brilliant red. And they'll stay that red way into the winter, which is how they got their name. Birds and other critters won't eat them until they've been frozen solid. Maybe the freezing sweetens them or maybe it deadens their bad taste or maybe the animals are starving by then and will eat anything. Who knows? Anybody? 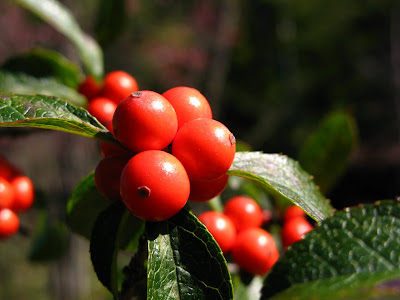 Spicebush (Lindera benzoin) has such pretty berries that ripen at different times, so some will still be green while others are orange or bright red. The twigs of this shrub are delightfully fragrant when bruised, but I haven't tried the berries. According to "Wildman" Steve Brill, a renowned wild foods forager, the berries taste a bit like allspice, and can be chopped up fine and used much like that spice. But I'd rather look at them on the bush. So pretty. 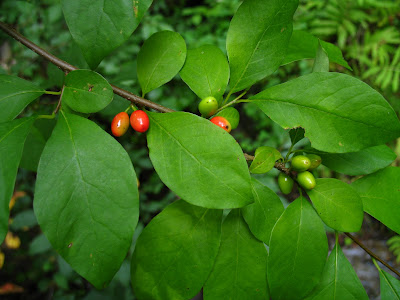 Now, here's a plant I've only seen this color once, and never again. Usually Indian Pipe (Monotropa uniflora) is a ghostly white or maybe tinged with pink before it blackens with age. But bright red?! Is this a special species of Indian Pipe, or does the soil it's growing in contain some special nutrients? The woods is just full of surprises, isn't it?

Mmm! Grapes! But don't eat them yet. We haven't yet had a frost, so these are really, really sour. The freezing seems to concentrate their sugars. Then they make a nice snack on an autumn hike. If the foxes haven't snagged them all. 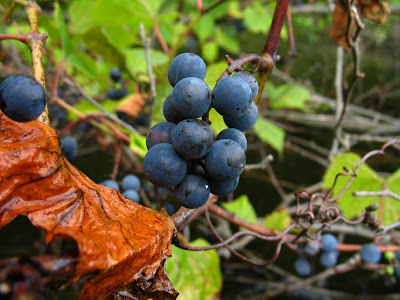 I took this photo of Common Dodder (Cuscuta gronovii) late last week, because I had never seen this plant in fruit. Those bright orange vines twine around other plants and suck their juices out. It's been such a rainy summer, I'll bet those fruits are extra juicy. I don't know much about this fruit, how it tastes, who eats it, etc. Always something new to learn about. 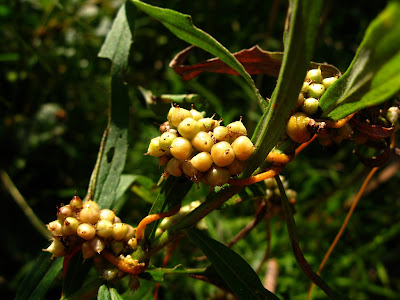 This is Indian Cucumber Root (Medeola virginiana), and yes, its roots taste a little like cucumber. But don't pull them up to eat. Let them grow and you can enjoy the lovely color they develop each fall. Looks like some critter's already eaten the dark purple berries that formed from its spidery greenish-yellow flowers. (Sorry this photo's blurry. This plant grows in dark, dark woods, with consequent camera shake. At least it captured the colors.)

These two tan-colored mushrooms are boletes, but I don't know which species. To properly identify a mushroom I'd have to take it apart, check the size and shape and arrangement of the pores (boletes have tubular pores instead of gills), see if the flesh stains when I crush it and what color it turns, maybe even make a spore print. But I didn't want to destroy these two, or mess up such a pretty arrangement, with the soft moss and the wintergreen sprig. (And yes, I know what they look like a pair of, fellas. They were smooth and velvety, too.) 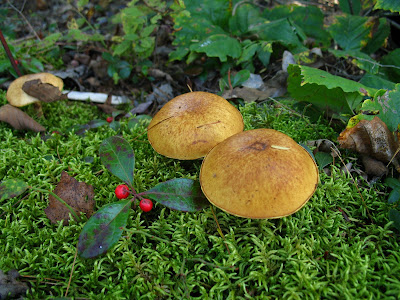 Posted by Jacqueline Donnelly at 9:07 PM

Thanks for the walk -- the photos were beautiful, as usual!

You have certainly given me something to think about. I'm going for a walk this afternoon and will be on the look out for berries. Very strange Indian Pipe. If you learn more about it please update us.

Oh, dear. I hope the sniffles are better by Monday!

Swampy, Squirrel, and Ellen: Thanks for stopping by and for your healing wishes. I think I'm on the mend and will be up for further adventures by Monday.

Yes, that Indian Pipe is certainly an odd one! I googled "red indian pipe" and learned that this a very rare variant. I took that photo about 4 years ago and I have not found it again. But everywhere you look now in the woods you see something beautiful: fruits and pods and seeds and coloring leaves.

This could be pinesap, Monotropa hypopithys, a different species. Note that there are more than one "flower" per stem.