The "Ancient Scouts" Troop Down to the River 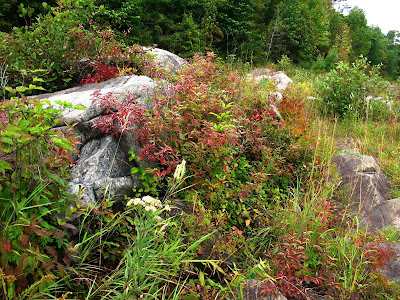 Cloudy and warm today, with the threat of a little rain. But that didn't stop the group of folks called the "Ancient Scouts" from climbing down the rocky banks to explore the Ice Meadows on the Hudson River just north of Warrensburg. Former Girl Scouts and Explorers who'd adventured together many years ago in Atlanta, Georgia, this group of about a dozen had gathered in Schroon Lake for a reunion this week, and a visit to the Ice Meadows was only one of the excursions on their agenda today. It's too long a story to tell right now, but somehow I ended up being their guide to this remarkable habitat along the river.
Now in their 70s or 80s (I'm guessing), they had also invited their former scout leader along for the reunion -- a woman named Jean who was still so agile we "youngsters" struggled to keep up with her, even though she was in her 90s. How I wish I had taken some photos of the group, but they kept me mighty busy answering questions and searching for stuff to show them, and then all of a sudden they had to go -- some off to climb a mountain, others to visit the Adirondack Museum in Blue Mountain Lake. I'm glad I at least had a chance to chat with Jean about my own adventures as a Girl Scout long ago. Long before anyone heard of Women's Lib, the scouts taught me confidence in my own strength and judgment. We didn't have to wait around for the boys to come help, and we learned lots of cool woodsy stuff and campcraft skills. I still know how to light a campfire in the rain.
Speaking of which, it began to rain just a little as the Ancient Scouts drove off, but I didn't feel like leaving the river quite yet. Even under a solid grey sky, the fall colors were lovely, and hey, I'd driven 40 miles to get here, might as well get my money's worth. Except for the asters, very few flowers were still in bloom, but I did see this scrufty little Shrubby Cinquefoil showing its sunny yellow blooms against the warm rusty gold of a dwarfed Royal Fern. 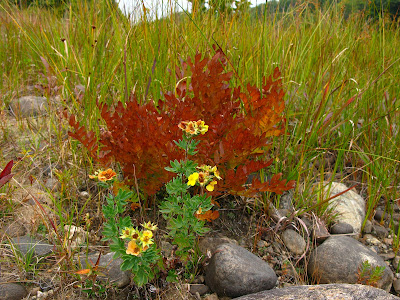 Sheltering among the clefts in the rocks, these stunted Winterberry shrubs were laden with full-size red berries. If you look really close, there's one tiny Harebell off to the left. Such a dainty appearing flower, it's hard to believe it can thrive in such a harsh habitat, where plants are crushed under 10 or more feet of "frazil" ice each winter. 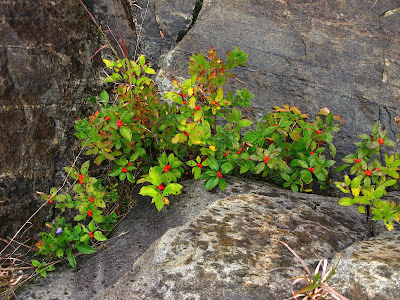 The rose petals long gone, these rose hips have their own kind of beauty. 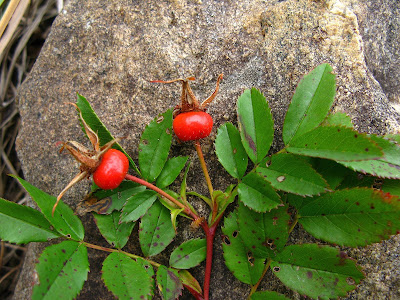 As the river rounded a curve in the bank, the foam swirled around in fascinating patterns.

Posted by Jacqueline Donnelly at 7:06 PM

Woodswalker: I love your story about the ancient scouts. I can only hope I'm half that agile when I'm that age! Bully for them!!

Your foam on the water looks like a VanGogh - a variation on Starry Night!

Carolyn, I know what you mean about being agile. Asprin has become my friend. I love the foam in the water. My first thought was an E. Munch painting but I agree with Ellen it is more like Starry Night. Excellent.

Carolyn, Ellen, Squirrel: Thanks so much for your comments. I too was amazed by how hearty these old scouts seemed, truly a testament to the power of nature to keep us young. As to the foam: I thought of Munch when I first saw it, but Starry Night is swirly, too. I have a photo of pine needles swirling on water that reminds me more of the Van Gogh. The swirls also reminded me of moire silk.