Errands all day and rain off and on: no hikes or paddles for me today. But I did take a stroll through my "critter" files and found some images from about this time of year that are kind of interesting. 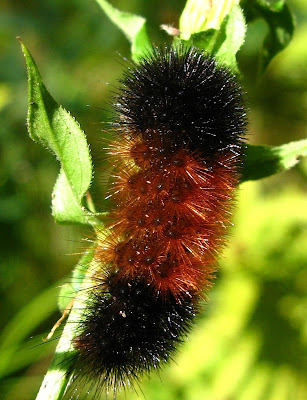 Even schoolchildren know a Woolly Bear caterpillar when they see one (Pyrrharctia isabella, larval form of the Isabella Tiger Moth). And they probably also know the folklore about its predicting the weather. Let's see, how cold will our winter be, according to this one's orange band? Of course, the band doesn't really predict the winter, but it does say something about how many larval stages this caterpillar has passed through. According to David L. Wagner, author of Caterpillars of North America, "at each molt, a portion of the black setae [hairs] is replaced by orange, and hence the orange band is broadest in the last instar." I guess we'd need samples from each instar for comparison. 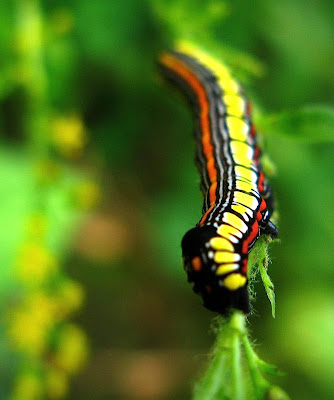 Here's another caterpillar you might find this time of year, since its favorite foods are goldenrods and asters. This is a Brown-hooded Owlet caterpillar (Cucullia convexipennis), and it's about as brilliantly colored as its moth is dull and drab. Wagner says that they're not that uncommon, but I've seen only one in all my years of close plant-watching. And I think they'd be hard to miss, don't you?

Holy mackerel! Have you ever see a fly this big?! Well, I admit the photo doesn't provide any perspective, so how would you know? I'll tell you, that bug was enormous, almost two inches long. I guess it's some kind of horsefly? An "elephant-fly" would be a more appropriate name. It landed on my driver's side car window as I was rolling the window up. I really rolled that window up fast. 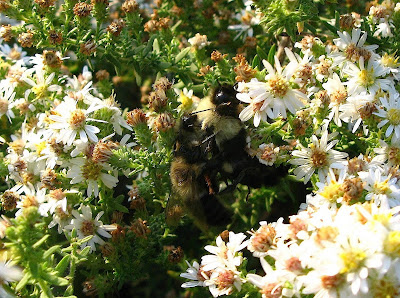 I wish I had a better photo of this altercation, but I didn't want to get in the middle of a bee fight. I was passing this clump of Heath Aster and noticed some kind of buzzy row going on amongst its blooms. The whole plant was thrashing around. There seemed to be one larger bee in the center of the melee, with a number of smaller bees attacking it relentlessly. Would they be biting rather than stinging? Can bees bite? I didn't get close enough to find out. I thought about coming to the big bee's aid by chasing the smaller ones away, but then they might have come after me. They sounded really mad!
Posted by Jacqueline Donnelly at 10:18 PM

Ouch. Two stabs in the back, no less. I have never seen bumble bees do that before. I always think of them as rather docile. I loved the Cucullia convexipennis caterpillar. I think they are one of the pretties. Didn't know that about the orange bands on the Woolly Bear, I guess I need to actually "read" my Wagner book. Thanks for the cool info.

HM...I wonder what bumblebee mating looks like. Could that be what you saw - smaller males vying for the large queen's attention? Maybe not, but it's a thought.

Ellen, (excuse me Jackie while I jump right in), I thought the same thing, it looks like there are two of them and their tongues are stuck into the back of the bee. It is very unsual. If they were fighting I would think they would use stingers at the end of the abdomen. I wonder if the smaller bees are collecting nectar or pollen off the larger one. And like you said mateing is a definate possibility.

You're right, I don't agree that the owlet caterpillar is common; I've never seen one. But it sure is pretty.

I also wondered if the bees could be mating.

As always, your photos are beautiful.

Squirrel, Ellen, Jackie: Thanks for stopping by and leaving comments.

The mating theory makes sense. There were more small bees than the two in the photo, and just one large one. So certainly, that could have been a queen. But would they have been mating in October? That's when I took the photo.