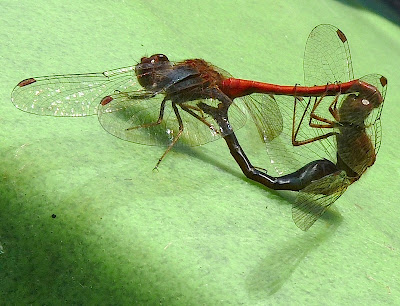 Photo by Sue Pierce
Okay. Sue Pierce sent me this photo to answer the question raised in my last post about how the male's sperm reaches the female's eggs while he's clasping her by the back of the head. As this photo shows, the female (while her head is still clasped by the male's terminal abdominal appendages and she clasps the male's lower abdomen with her feet) bends her abdomen down and forward so the male can deposit his sperm into her reproductive opening on the underside of her abdomen. This is a great photo, Sue. We can actually see this penetration in process.
According to Sidney W. Dunkle's Dragonflies Through Binoculars, "Just one mating probably provides a female with a lifetime sperm supply, but dragonflies provide one of the best examples of the phenomenon of sperm competition. The penis of male dragonflies is highly modified and can scoop out or push to the side any sperm already present in a female. Most of the time spent in 'copulation' usually involves removal of sperm, with injection only at the end of the process." Sneaky. And amazing.
But none of the dragonfly couples I saw yesterday in their frenzied dipping and darting ever assumed this copulatory position. Were they still involved in foreplay, or had the deed already been done? Again, I turn to Dunkle. He writes that some male dragonflies "retain the female in tandem after mating, and travel with her while she lays her eggs." He calls this "contact guarding," by which the male "prevents other males access to his mate and acts like an aerial towtruck, doing most of the work of flying." Just leave the driving to us, say the guys. They even choose where the female will lay her eggs. And I bet if they ever watched TV, those guys would also hog the remote.
Addendum: One more fascinating fact about the male dragonfly's sexual equipment. Apparently, his semen is produced way down at the end of his abdomen and not at the site of his penis. Before he can mate, he has to bend the tip of his abdomen down and forward to deposit his semen into his penis. Only then can he insert the semen into the female's receptacle. Nature is just so full of fancy tricks, is she not?
Posted by Jacqueline Donnelly at 11:44 PM

Dragonflies are fascinating on so many levels! We were watching some incredibly blue darners at Moxham Pond yesterday, but of course they refused to perch on anything, making photography impossible.

This is a great shot!

I agree, Ellen, about fascinating dragonflies. I had never seen such a mating frenzy, bunches of couples, all dipping and darting in a small area, and I couldn't make any sense out of what they were doing. Then Sue sent me this photo that made it all clear what was going on. That Sue has a magic eye for critter photos!