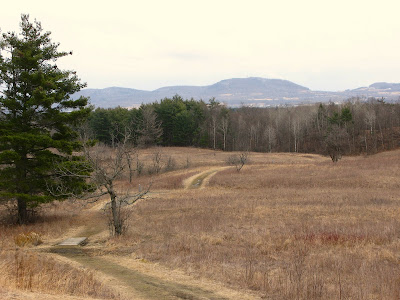 Another gray and blustery day, with occasional spatters of rain. I could have stayed home and cleaned my house for exercise, but I'd always rather go for a walk instead. Even gray, blustery days have their charms. Especially when that wind goes moving in waves across meadow grass, and mountains rise against that gray sky, and swirling clouds turn the sky the color and texture of Carrera marble. I knew I could find exactly these kinds of vistas at the Saratoga Battlefield.
Officially named the Saratoga National Historical Park, the battlefield occupies sweeping tracts of land overlooking the Hudson between Schuylerville and Stillwater. It was here in 1777 that American forces overwhelmed British forces in a battle historians now consider the turning point of the Revolutionary War. The park is a wonderful destination for those who are interested in military history, but it's also a great place to hike, with many trails of varying distances. I chose today the Wilkinson Trail -- a 4.2 mile historic footpath that retraces the same route where soldiers marched to and from battle. Today I had the entire trail to myself. 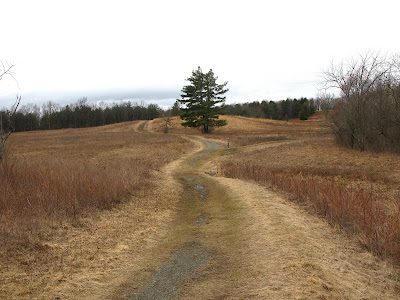 Well, myself and a number of deer, that is. And the deer here are quite approachable. This doe was resting under a tree and didn't rise to her feet until I was within 15 feet of her. I think the deer must know that no hunting is allowed in the park.

The park, with its open grasslands, forest tracts, and rolling hills, also provides great habitat for many birds, including threatened species like Meadowlarks and Bobolinks. These open fields make perfect staging areas for the mating rituals of Woodcocks, as well as happy hunting grounds for Harrier hawks. I saw a hawk today, too high in the sky for me to determine its species, and also a flash of blue that I think must have been a Bluebird. 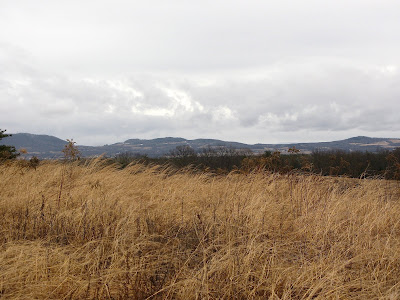 I confess I did not hike the entire four-plus miles of the Wilkinson Trail. I was tempted off course by a trail that crossed this tiny stream, which led to a short cut through a wooded valley and back to the start of the trail. 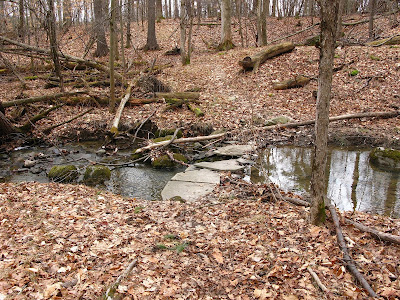 Perched high on the hills that gave the Americans powerful advantage over the British struggling along the Hudson below, these cannon stand as reminders of the history that happened here. 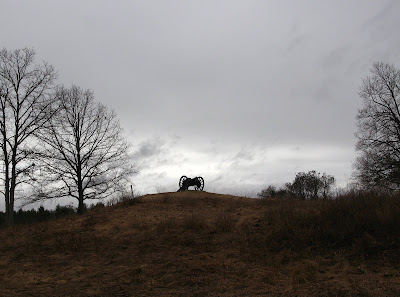 These hills and fields are so peaceful now, it's hard to imagine the roar of those guns and the screams of the dying and wounded. At the visitors' center here you can learn all about the clever strategies of the generals, the bravery of soldiers, and the glory of victory in battle. But not much is mentioned about war's waste and woe. Sometimes I wonder how different our nation would be if the British had won, or if, even better, there had been no war at all. Would our liberties be all that compromised if we turned out like Canada? At least Canada doesn't go starting new wars all over the globe as we do. Which means that their treasure can go into good things like health care for all, instead of for armies and missiles. Sometimes I just can't help wondering.
Posted by Jacqueline Donnelly at 8:48 PM

You have some lovely photos in that post. I very much relate to the temptation of little paths that branch off from the main trail through the woods. I hate (but also love) trying to decide between two appealing and divergent paths. Which way will have more treasures?

Way back in my college days, we did a Deer Drive at Saratoga Battlefields. There must've been 30 or so students and teachers, and our mission was to census the deer population. We would surround a section of forest/field, and one line would walk through, flushing the deer ahead of us - kind of like beaters used to flush the deer or boars in old Europe/England for the nobles when they went hunting. As the deer sprang away, they were counted by the person whose left side they passed as they exited the area. I almost stepped on a fawn in one area. We tallied some ridiculous number of deer - something like 10 or 20 per square mile, versus the 0.5 per square mile we got up here in Newcomb the day before. It really demonstrated the difference terrain/habitat makes in where the deer go.