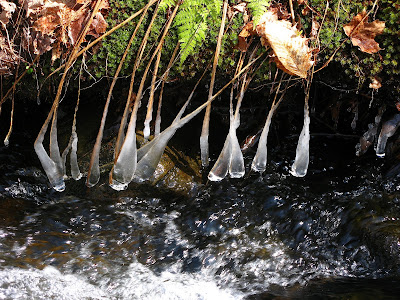 Brrrr! Fifteen degrees this morning! Myself, I'd have frozen solid if I'd had to spend the night bare naked in the woods. So how did my sweet little new baby trillium fare, the one that I found in bud two days ago? I had to find out, so off to Orra Phelps Nature Preserve I tore, making my way along rushing brooks now sparkling with ice, and up to the wooded ridge where I found the Snow Trillium patch. And wonder of wonders! Not only did that bud survive unscathed, a second plant was now very close to blooming. Isn't Nature amazing? 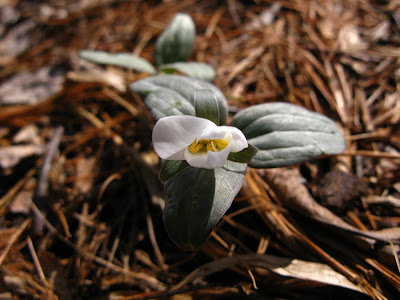 By then, the sun was melting the snow in the woods, and I thought that a walk around Mud Pond would be a nice way to spend a few hours outdoors. And so it was, with the quiet water reflecting a clear blue sky. 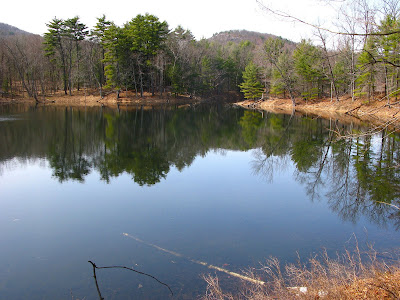 I made my way from Mud Pond to Moreau Lake, where I sat on a hillside watching a pair of ducks way out on the water. I could not figure out what kind they were, for each time I tried to zoom in on them with my camera, they'd dive beneath the surface. Well, that put them in the "diving duck" category. The drake had lots of white on his body, as well as almost half of his dark head, so I thought he might be a Hooded Merganser. But the hen had a round darkish head with white patches on her cheeks, not Merganser-like at all. They might have been Buffleheads. Too bad I couldn't get a photo of them, but nevertheless, the water and trees sure looked pretty. 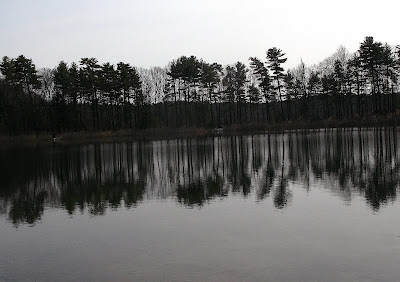 Walking back to my car, I passed many Hazelnut shrubs. Today, the shrubs were festooned with dangling catkins of staminate flowers that looked about ready to shed their pollen on the wind. 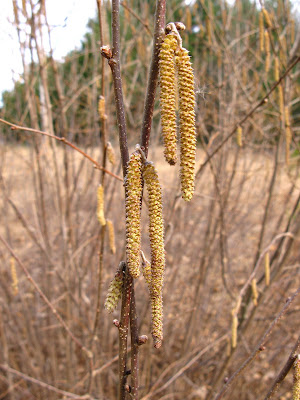 Okay, I thought, if the boy-flowers are here, the girls are around as well. But where could they be? At first glance I sure couldn't see them. That's because they are so tiny -- maybe an eighth of an inch across. And sure enough, there they were, all up and down the twigs. Dark red bushy little things sprouting out of scale-covered knobs. Very hard to photograph (when I got close enough, the camera blocked the light), but this one didn't come out too bad. 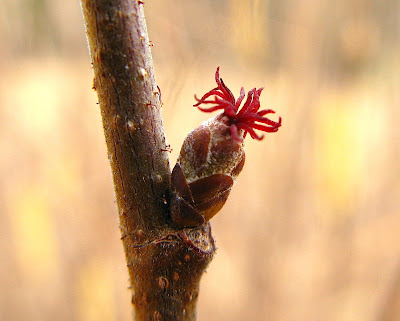 Considering that these are wind-pollinated flowers, you wouldn't expect them to be so brightly colored, since they don't need to attract pollinators. So I think of their pretty color as a generous gift from the gods. According to John Eastman, author of The Book of Forest and Thicket, the ancient Irish people regarded the Hazelnut as "a tree of knowledge, repository of spiritual favors and good luck." Well, I'm Irish only by marriage, but yes, I have to agree.
Posted by Jacqueline Donnelly at 8:29 PM

Ah-ha! Now I know what to look for on my hazelnuts! I think I still have a few weeks to wait, though. The catkins are still all bunched up like it was winter - and considering Monday we woke to about 1" of snow, who can blame them!