Frogs and Flowers and Frazil Ice 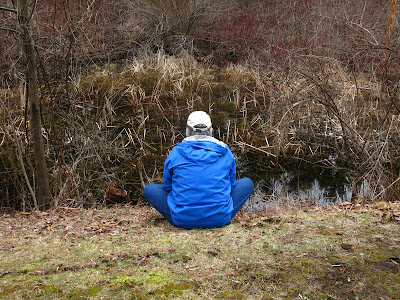 Does Sue look like a big blue frog to you? Nope, not to me, either. But she sure must have sounded like one to the mess of Wood Frogs congregated in the pool beneath where she sits. The frogs all ceased their quacking calls as we approached this site, but after we sat there awhile and then started quacking ourselves, the frogs started up again with more vigor than ever. We must have made quite a sight for passersby: two dames squatting frog-style by the side of the ditch, quacking away like mad! We got the idea from naturalist Gerry Wykes's blog Naturespeak, where he posted a video of a frog coming after him when he imitated the territorial quacks of mating Wood Frogs. Go check it out if you want a big laugh. And learn stuff from him, too. 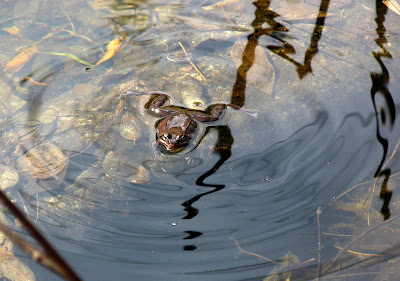 Quack!!!
Following our froggy conversation, Sue just had time for a quick walk along the Warren County Bike Path. She wanted to check some Hepatica plants she knew of, and we were delighted to find one just emerging from its furry bud. It won't be long now before Hepatica carpets the woods with its beautiful blooms. 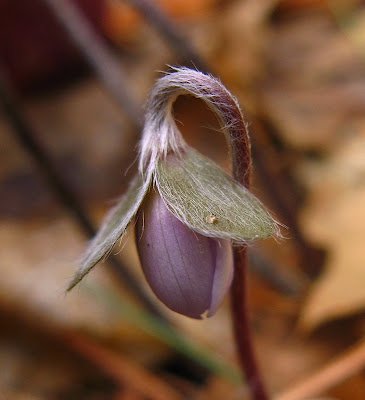 Sue had to go to work after lunch, but since I was already halfway there, I drove on up to the Hudson Ice Meadows just north of Warrensburg. We had a mild winter with much less snow than usual, so I wondered how much "frazil ice" would remain along the banks by now. Frazil ice is formed when rushing water forms frozen drops in the air, creating fluid slushy ice that dams up the river and collects on the banks, sometime rising to heights of eight feet or more. What was left today was between three and four feet thick. 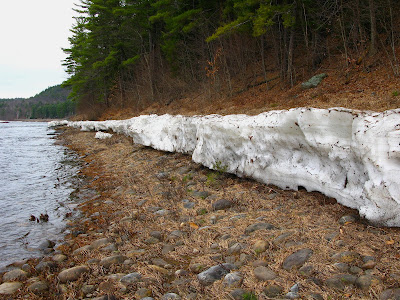 With so much of the ice already gone, I'm betting the spring wildflowers here will emerge well ahead of schedule. This Early Saxifrage was already fat with buds. 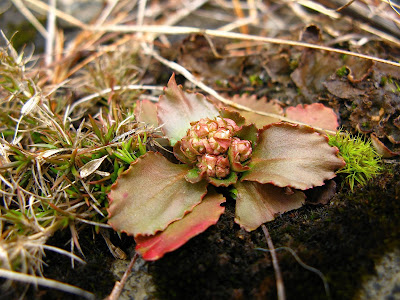 And that looks like the leaves of Rock Sandwort starting to green up, just to the left of the saxifrage. Because of the ice deposits and their effect on habitat, this area is home to many plants rarely found in other parts of New York. I can't wait to come back to find some in bloom.
Posted by Jacqueline Donnelly at 8:33 PM

I must be psychic. When I drove through W'burg on my way home Monday, I thought of you, wondering if you were planning a trip to the Ice Meadows any time soon. Et voila!

No frogs here yet to call in, but I, too, have been thinking of quacking at them to see if they respond. :)

PS - beautiful shot of the hepatica.

Beautiful photos! All of them.

I haven't tried quacking, at least not yet, but I will. I have noticed that at night they tend to swim toward the light to check it out and then swim away. Curious little critters.