Look Up, Look Down, Look All Around!

Wow! What a day for a hike up a mountain! Radiant blue sky, springlike warm temps, a well-packed trail that rendered snowshoes unnecessary, and a good friend to share it all with. Actually, quite a few folks came along, since Sue and I joined a planned group hike to the Spring Overlook led by Moreau Park staffers. Then the two of us stayed up on top when the rest of the group descended.
The view from the overlook was spectacular, with the Hudson below so beautifully blue, and the mountains beyond standing out so clearly against that radiant sky. 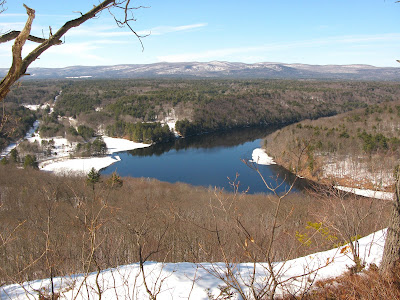 We weren't the only creatures enjoying a walk on this warm sunny day. Thousands and thousands of snowfleas were hopping all over the surface of the snow. 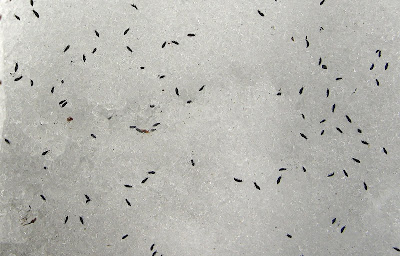 Here's a closer look at one of the little darlings. They're not really fleas, although they do hop. They're actually called "springtails" because of the little springs tucked under their abdomens that send them airborn when released. They're not really insects, either, although they do have six legs. Entomologists don't seem to know quite how to classify them, so for the moment they exist in a category all their own. It was really hard to get a close-up of one. I'd just get the camera focused when Zip! it would disappear. 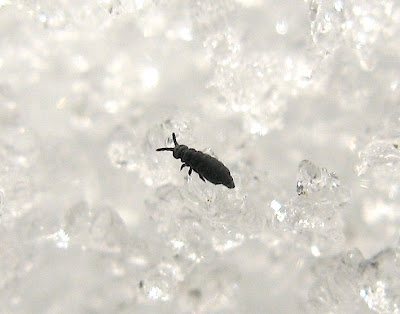 This little guy (gal?) was easier to photograph, since it was moving slowly across the snow and stopped dead in its tracks when Sue and I poked our camera lenses at it. I wonder if it was out hunting snowfleas for lunch.

Wherever we looked we found something remarkable to behold. The snowy-white clouds in the blue, blue sky were constantly shifting shapes in the most amazing ways. 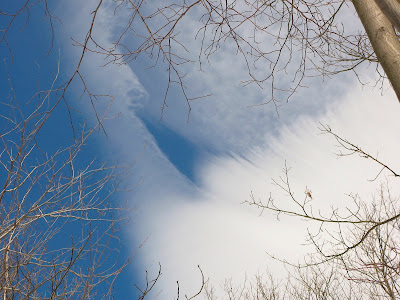 The clouds were hard to photograph under the tree limbs. Just imagine what we could have seen, lying in an open meadow to gaze at the sky. We did sit down on the ground for a while to eat our lunch, but it didn't take long for our fannies to get pretty cold. Makes you wonder how cold-blooded critters like spiders and snowfleas can wander about on bare feet.
Posted by Jacqueline Donnelly at 8:48 PM

Can't wait to go back to Saratoga! Great pictures.

Your wondering about them walking barefoot on snow/ice makes me think of an article from The New York Times many years, headlined, "Why Don't Penguin's Feet Freeze?" I think it was in the early days (20 years ago?) when they had just started the Science Times section every Tuesday that I liked so much. And I still know why penguin's feet don't freeze!

As always, beautiful springtime photos of the overlook of the Hudson and surrounding forest. The blues were fantastic.

Isn't it wonderful that, as familiar as the view from the overlook is, it never fails to capture the heart and soul. As John said, can't wait to get back to Saratoga.

Sunday was a great day to be out. I went birdwatching and saw tens of thousands of snow geese. They should be winging their way towards you in another day or so!

Beautiful here in NYC, too, although our snow has pretty much vanished. I never saw snow fleas/springtails - how fascinating! I'll have to see what I can find out!

Great shots! More glorious days on the way - I expect you'll be out and about.

Thanks for all your kind comments, dear friends. It's always good to hear from you!