A Good Day for Frogs. And Flowers

Well, the weather predictions were right: rainy and cold starting Sunday night. But you won't hear me complain, because we really needed the water. Anyway, Mondays are when I take my ill friend for a drive, and it was toasty and dry in the car, despite the weather outside. We did get out for a short walk near a marsh, where we heard lots of Red-Winged Blackbirds and Song Sparrows singing away and caught a glimpse of a Great Blue Heron flying overhead, long legs stretched out behind. We then drove along the Hudson River until we crossed the Mohawk River at Waterford/Cohoes. Here's where the Mohawk forms the southern boundary of Saratoga County, roaring over the wide Cohoes Falls shortly before joining the Hudson at Troy. In a week or so, much of the Mohawk's water will be diverted into the Erie Canal, and the falls will shrink to a trickle. So to see the falls in all their glory, we had to catch them now. And they were spectacular. 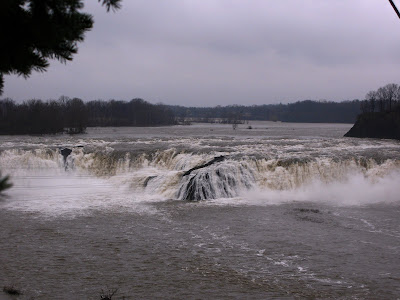 Today started chilly and damp as well, but by noon the sun was shining brightly. The better to see all the Wood Frogs by! My friend Sue took me to a wet spot along the Warren County Bike Trail where she'd seen many frogs last year, but we'd thought it was much too early and weren't expecting to see them. But soon we heard their quacking calls and wow! they were there in abundance! 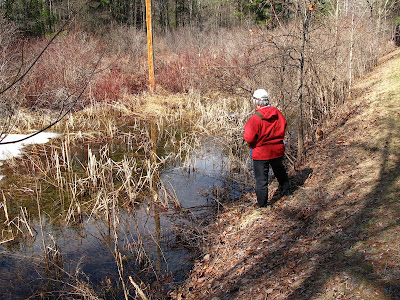 How many frogs can you count in this picture? Can you see the bluish puddles of eggs floating just under the water? 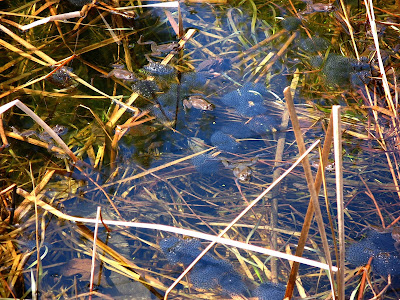 I managed to catch one frog in mid-croak, his cheeks puffed out, and the water set to quivering around him. 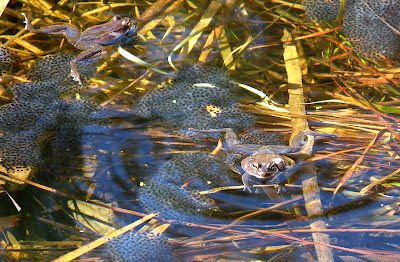 Love was in the air. And under the water, too!

On my way back to Saratoga I stopped at the Orra Phelps Nature Preserve in Wilton, wondering if maybe Snow Trillium shoots could be found. This is a trillium that's not supposed to be found this far north, but I found it here last year. And yes, it's back, right where I found it before, many tiny plants hardly bigger than my fingertip.
And I'll be darned! Here's one almost ready to bloom. No wonder they call it "Snow" Trillium. It seems to start blooming as soon as the snow is gone.
Next stop was the Skidmore Woods, where Spring Peepers were calling shrilly in one pond and Wood Frogs quacking away in another. My quest was to check on Hepaticas, since so many other spring things are occurring early. But I found no flowers yet, just itsy bitsy buds like this one, all snug in its furry bunting. 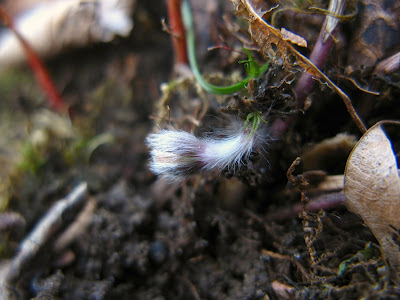 Well, I did find one flower, and I hope this year I will find out what to call it. A violet, yes, and a very early blooming one, pure white with no purple veins on its lower lip, unlike other early white violets like the Sweet White and Northern species. There was just one half-open bloom today, but even at this early stage it was deliciously fragrant.

Here's another distinctive feature: a purple spur on an otherwise snowy blossom. 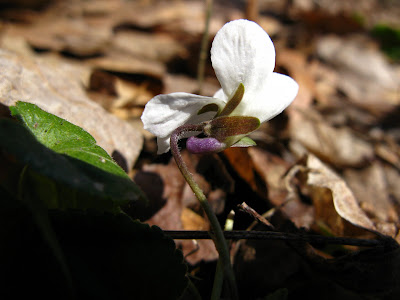 I've never found any other violet quite like this one, nor can I find one like this in all my flower guides. Anybody have any suggestions?
Posted by Jacqueline Donnelly at 7:59 PM

Frogs!! Hooray! I haven't seen any yet, but I haven't been looking for them either since I figured it was too early. I shall have to undertake a frog seeking quest this weekend!

Frogs! You made my day!

What great finds. No frogs here yet, or flowers, but every day I look.

As for your violet, I believe it is Viola donnellia, the Saratoga Violet. :D

Cohoes Falls - a holy place to the Mohawk people, a place of miracles.

Furry flowers - like a cross between animal and vegetable!

Frogs - I went back to that spot today (Thursday), and NOT ONE frog visible (or audible!)One would never know, just walking by on the trail.
The eggs were still there, though.
We were very lucky to be there at that particular time to see them.

Good for you! Nice find and nice photos. I loved the one calling. It is amazing that they can be there one day and gone the next.

Hello and thanks, dear froggy-loving friends. How I enjoy knowing you've come on this outing with me. As Sue pointed out, it sure was our lucky day!

I love your picture of the falls. I live not to far from there.