A feral cat who comes to our back door for food showed up today with her tiny kitten in tow.

Long-time readers of this blog might remember my story of finding feral kittens two years ago, plus subsequent posts about our adventures with these darling babies.  Well, the mother of these kittens became pregnant again the next spring, but she appeared to have died soon after she gave birth to this second litter.  We saw her once, with sunken sides that three days before had been swollen, and this day blood was running down her back legs.  That was the last time we saw her.  Sad, but to tell the truth, I was relieved we would not have to deal with a burgeoning colony of feral cats in the neighborhood.  And these cats were truly feral, not just strays.  They were terrified of humans, and smart enough to elude our efforts to trap and neuter them.

The father of our kittens (we call him Harley) continued to visit our back steps for the food we placed there for him, and then this spring he showed up with another black-and-white cat that could have been his female twin.  Chances are, it was one of his offspring.  And sure enough, she, too, was soon seen to be pregnant, and eventually she had her babies.  She continued to come frequently to our back steps for food and our bird baths for water (we now call her Haricot), and just today, her one little kitten came with her.  She's been back several times, even approaching our back door, and always with just this one kitten in tow, so it seems she had just this one baby.

While Haricot had her dinner this evening, little kitten had his/hers too, nursing while mama ate. 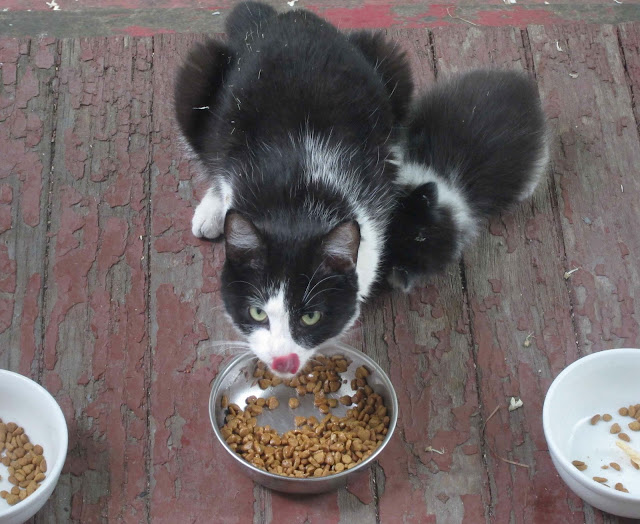 Such a cutie!  If we could only manage to trap it, I'm sure we could find it a good home.  How I wish we could trap Haricot as well, have her spayed, and then let her go.    She's not quite as terrified of us as Harley is, but I doubt she could ever be tamed.

OK, wish me luck as I figure out how to capture this kitten before it grows too old to tame.  Then wish me luck again as I seek to find a home for it.  Not with us.  We already have five cats.

But gosh, little kittens are cute!  I took a video of this one playing around our birdbath.


Posted by Jacqueline Donnelly at 11:03 PM

I wish, I wish, I wish that every person who has a cat, or has access to a cat, would have them all spayed or neutered. The end of the first mama cat sounds harrowing, and this one will probably go the same way, eventually.

On the bright side, however, that is one bouncy teeny kitty! Cute little fluffball!

I live where unwanted cats are sometimes abandoned, apparently in the false hope that they will survive to fend for themselves. I always know there's a new resident when they show up in my bird feeders, eating the bird seed. And most are seen once or a few times and never again. A few do survive, wild as a raccoon, upapproachable. Last evening, a tiger cat showed up with a similarly adorable kitten, tiger with white feet. She stretched out on my deck, the kitten playing nearby. i touch the patio door and both are gone, just that quickly.