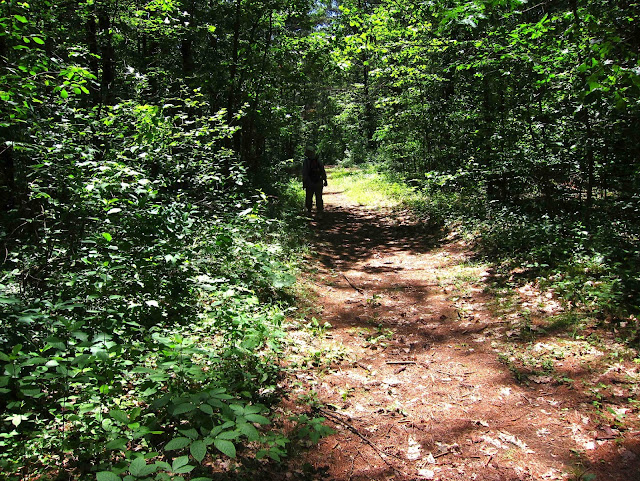 Another lucky day today!  First, the weather was gorgeous:  Bright.  Cool.  Sunny.  NO RAIN!!!  Second, we found the flower we were looking for in Cole's Woods.  If you don't know this woods, adjacent to Crandall Park in downtown Glens Falls and crisscrossed by seeming miles and miles of trails,  you would not understand that finding this flower was like finding that proverbial needle in that haystack.  But I was three times lucky today, because my eagle-eyed friend Sue Pierce was with me, and she was the first to spot the One-sided Pyrola (Orthilia secunda) hiding out amid the Pipsissewa and the Shinleaf a good dozen feet off the trail in the darkly shaded woods. 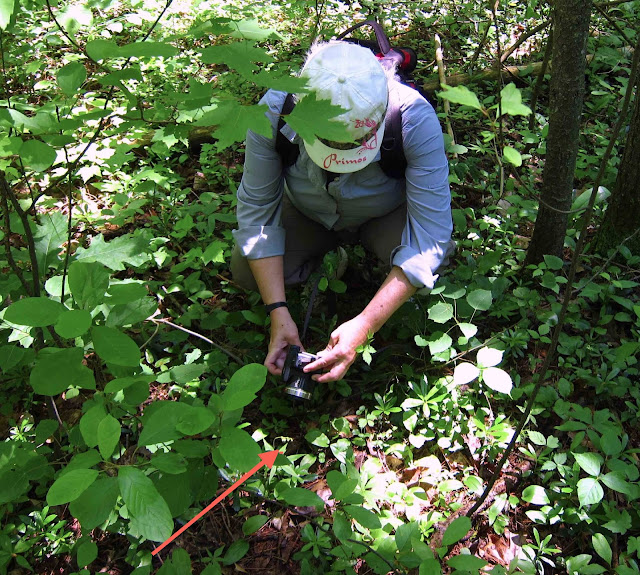 One-sided Pyrola (also called Sidebells Wintergreen) is not a rare plant in New York State, although it is in several surrounding states.  But it IS kind of hard to find in the woods, being small and greenish and growing among other low plants with similar leaves, such as Canada Mayflower and Partridgeberry.  We had found it last year at Cole's Woods but couldn't remember exactly where.  Sue had one inkling of where to find it and I another.  It turned out that my inkling was correct, but I never would have seen it without Sue pointing it out to me.  We make a good flower-finding pair.  This year, we marked on a map where to find it again. 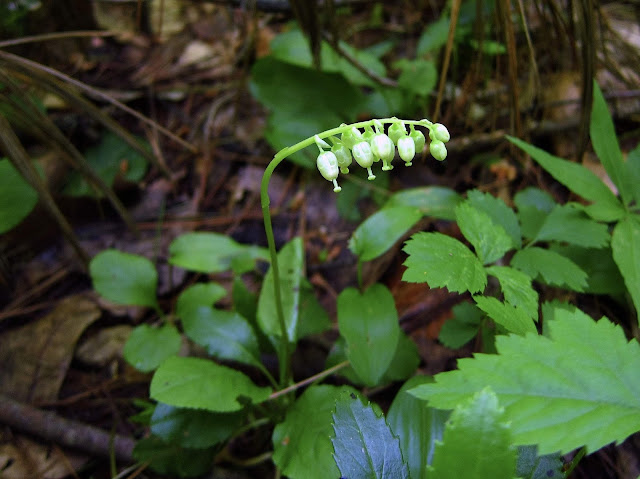 But even if we had not found the flower we were seeking, we would have enjoyed our woodswalk enormously.  One of our pleasures was finding large areas of the woods just carpeted with the snowy twin trumpets, dark round leaves, and bright red berries of Partridgeberry (Mitchella repens).  This is the only plant I'm aware of that requires two flowers to make a single berry.  In fact, both of the blossoms that join to one ovary need to be pollinated to produce the fruit, which close inspection reveals to have two blossom ends. 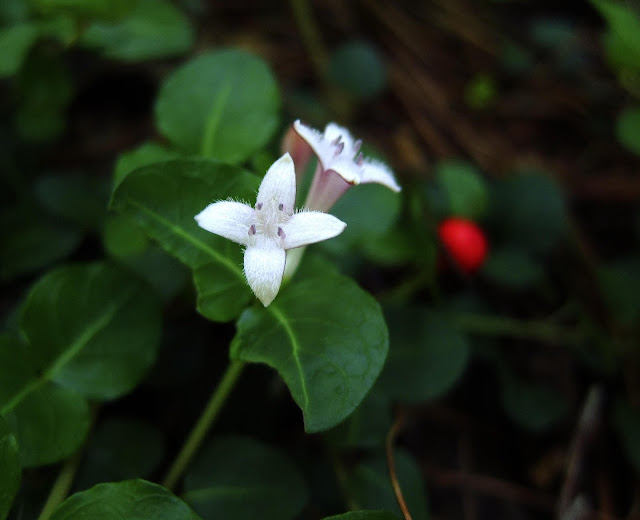 Another delightful find was the fruit of Starflower (Trientalis borealis), tiny green balls set among starry bracts, as pretty as if they'd been crafted by a master jeweler. 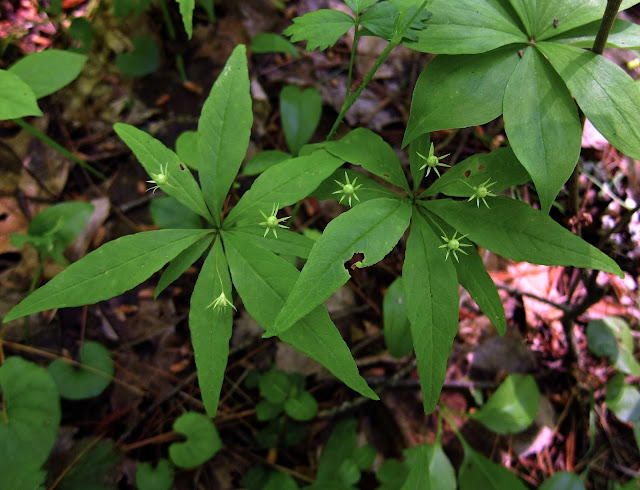 Ha!  Here's another lucky event!  It wasn't until I looked at this photo on my computer that I realized I had also included the leaves of Indian Cucumber Root (Medeola virginiana) in the same photo (upper right corner).  These are two plants about which I am often confused when I see only their leaves, since both have long tapering leaves that join in a whorl about the same height from the forest floor.  But seeing the two side-by-side reveals the obvious difference in the veining of the leaves.  The Starflower's veins branch out from a central rib, like a feather, while the Indian Cucumber Root's veins run parallel to each other, starting from a central point and terminating at the leaf tip.
Posted by Jacqueline Donnelly at 8:32 PM

Just my kind of walk in the. Woods! I don't think I've ever seen partridge berry in flower. And is that poison ivy nearby in the first picture?

I learn something every time I visit. Wish I could take your blog with me to camp where many of these plants grow.

Glad to have you along, Furry Gnome! I wouldn't be surprised if it was Poison Ivy, since plenty of it grows in Cole's Woods. It looks like Sue's hand is almost touching it. I'm lucky in that I seem to have outgrown my childhood sensitivity to the toxin and haven't had a case of it for over 50 years.

Thanks, three collie. That does my heart good to know. If you want a good guide to our region's wildflowers, I recommend Newcomb's Wildflower Guide. It has a good keying system for IDing most of the plants we would find in New York. Have a wonderful time at camp. Who takes care of the cows while you get a well-deserved vacation?