A Year of Floral Rarities!

For a wildflower enthusiast like me, 2019 was one terrific year. After nearly 30 years of stalking wild plants, I don't discover many new ones anymore. But this year, eleven new plants joined my life list, and wonder of wonders, three of those new discoveries turned out to be quite rare.   To add to the surprise, at the time I first saw these rarities, I assumed they were common ordinary plants, ones I had seen many times before. But thanks to the help of some friends who are far more expert than I am, I now know differently.

The New England Violet (Viola novae-angliae):
When I first saw the violet pictured below, I nearly passed it by as just another Common Blue, a denizen of every suburban lawn and city alley.  Ho hum, dime-a-dozen . . . . 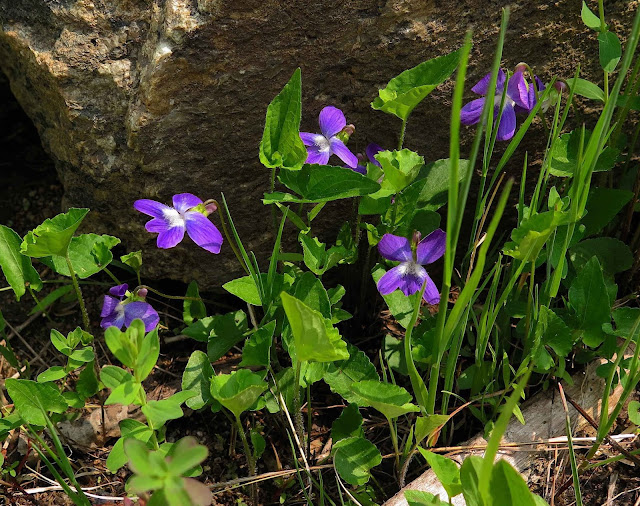 But wait a minute!  The vivid reddish-blue of the flowers, those tapered leaves, and the overall furriness of leaves, stem, and flowers drew me in to take a closer look. Intrigued by these characteristics that seemed quite odd for a Common Blue, I took photos of the salient points and sent them to Steve Young, chief botanist for the New York Natural Heritage Program.  It was he who informed me that I had happened upon the truly rare New England Violet (Viola novae-angliae) in the only place it has ever been found in all of New York State, along the banks of the Hudson River in Warren County. That's right.  This violet has never been found at any other site but this in all of New York State! For obvious reasons, it is ranked as an Endangered species in New York.  (You can click on this link to visit the post where I recount the day I found these and other unusual violets.) 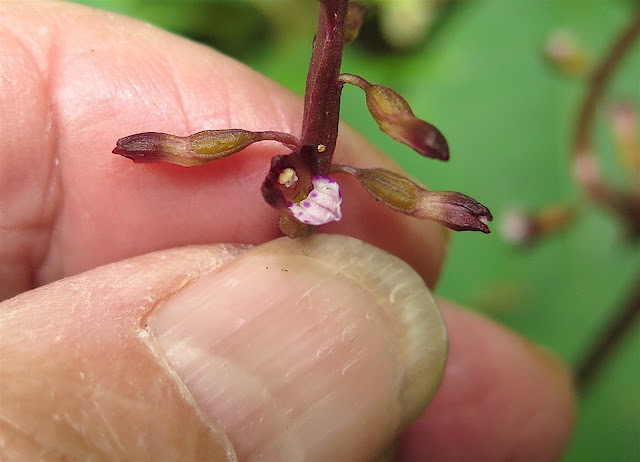 My friend Dan Wall is an orchid enthusiast and also an artist who paints careful renderings of all the orchids that grow in New York State.  He had seen my photos of these orchids, and it was he who first wondered if some of the ones I had photographed might be the rare variety called Pringle's Autumn Coralroot (C. odontorhiza var. pringlei). He based his suspicion on the open florets that revealed the pollen bundles within, as well as the broad lower lip of the floret. The standard variety of Autumn Coralroot produces closed florets that possess narrower lower petals, if they possess any petals at all.

Dan sent some of my photos to our leading state botanist, Steve Young, who sent them on to "the" expert in this taxon, a Professor John Freudenstein at Ohio State University. Noting the open-throated floret and the shape of the petal, Professor Freudenstein judged it to be the exceedingly rare variety, Corallorhiza  odontorhiza var. pringlei, last reported from only one New York county (Monroe) way back in 1903 and never found again there or in any other county in the state.  By now, this plant is  actually rated as Extirpated from New York. Well, I guess a plant can't be rated any rarer than that!  State-ranked SX!  I'm happy to report that a secure population is now known to be thriving at Moreau Lake State Park.  (You can click on this link to read my post about finding new populations of this super-rare orchid at the park.)

Green Rock Cress (Borodinia missouriensis):
Most Mustard-family plants look rather weedy. That's certainly the case for Green Rock Cress (Borodinia missouriensis), whose small white flowers don't exactly call attention to themselves, hidden as they are among other trailside greenery at Moreau Lake State Park. I'm sure I had ignored them for years, if I even noticed them at all. 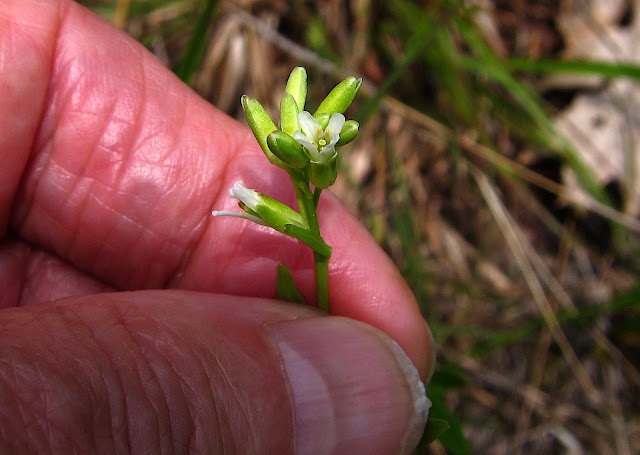 But when Green Rock Cress goes to seed, the plant is pretty hard to ignore, with its long, slender, shiny siliques arching away from its tall stems, arrayed like water falling from a fountain.  I had definitely noticed this plant for a number of years, searching my wildflower guidebooks in vain for its identity, and finally giving up.  Hey, it's only one of those uncountable number of no'count mustards, I thought, and thought no more of it.  For a while, anyway. 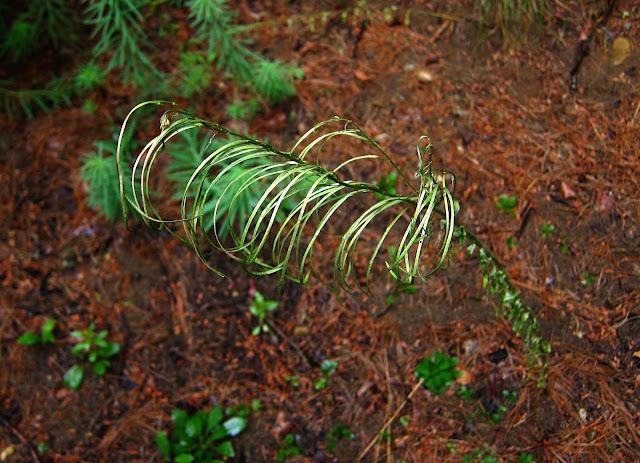 But this year, my curiosity ruled.  I just HAD to know the name of this plant with its distinctively cascading siliques. So I posted several  photos of it on Facebook, including close-ups of leaves, stem, and basal rosette, and tagged some of my Facebook friends who are far more expert than I when it comes to plants. It didn't take long for a number of friends to chime in, and after some challenging back-and-forth among them, the consensus was that this is Green Rock Cress (Borodinia missouriensis), formerly called by the scientific name Boechera missouriensis. Thanks need to go to my dear friend Andrew Lane Gibson, a rare-plant monitor for the state of Ohio, for helping to bring this consensus about.
Once I learned the name of this plant, just imagine my surprise when I also learned that it was not just some no'count little weed, but rather a Threatened species in New York State, occurring in only 6 to 20 locations throughout the state. Now knowing that Green Rock Cress was considered a very vulnerable species, I asked Rich Ring, a rare-plant monitor for the state, to visit the park and assess the extent of the population. I'm happy to report that we found around 200 specimens at two different locations in the park.  Here's a link to my post recounting our several rare-plant searches at Moreau Lake State Park last July.

Remembering my friend Ed:
I'm sure most folks can imagine how happy I am to have found such super-rarities in my personal hunting grounds, as well as how lucky I feel to have such super-expert friends who are always willing to help me identify each find.  But I'm also feeling sad that I can't share my excitement about these finds with the man who more than anyone else helped to feed my passion for plants.  That man is Ed Miller, my dear friend, fellow wildflower nut, and mentor extraordinaire, who died this past March at the age of 94. I hope this photo below conveys some of the joy we found in each other's company.  To understand why I loved this man so much, here's a link to the blog post I wrote as a tribute to him on the occasion of his 90th birthday. I'm happy to report that he maintained his vigor of mind and spirit as well as his marvelous delight in the natural world until a very short time before he died, at peace, without pain, and surrounded by those he loved and who loved him.  May we all live and die so well. 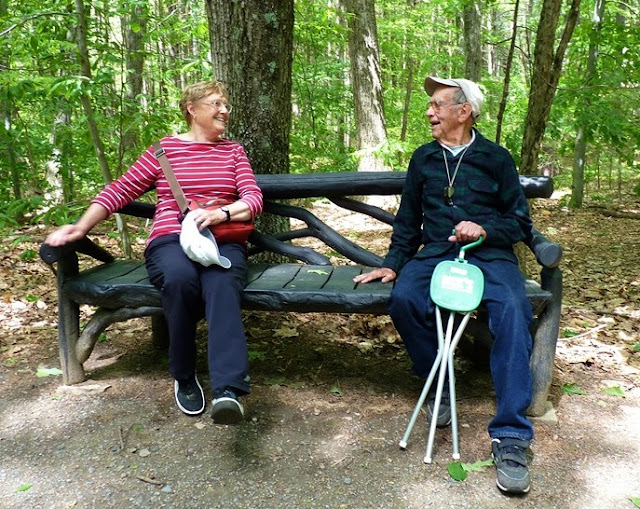 Posted by Jacqueline Donnelly at 4:17 PM

Congratulations -- ya done good! It's always wonderful to find something rare and unusual. Here's to many more.

That is a terrific botanical year! Congratulations! And it does sound like you need some expert help to id them.

How sadly you must miss your dear friend. What a wonderful group of finds in the rare plant world for you! Congratulations. I know we share the joy of the natural world...who needs TV anyhow? Hope there are many more exciting adventures waiting for you in 2020!