Some Things Change, Some Don't

Wildflower nut that I am, I like to revisit many of my favorite flowers each year, just to make sure I still know where to find them.  This is especially true for plants that I personally know from only a single location,  even if they're not necessarily classified as rare in the state.   In the case of Tall Ironweed (Vernonia gigantea), I know of only one location where I've found it in Saratoga County: by the parking area for the Gick Farm Parcel of the Wilton Wildlife Preserve and Park.   As it happens, Tall Ironweed is also listed as Endangered in New York State, the rarest category of all.   Realizing it was getting late this summer to find this showy purple flower in bloom, I hurried out to Wilton today, hoping I hadn't missed it.  But as I pulled into the parking lot, the dread realization came over me that I will probably never find this plant again in Saratoga County.  The grassy area where it once had thrived was mowed to an inch from the ground.  Along with all the wildflowers that used to grow there.  The neat freaks had struck again! 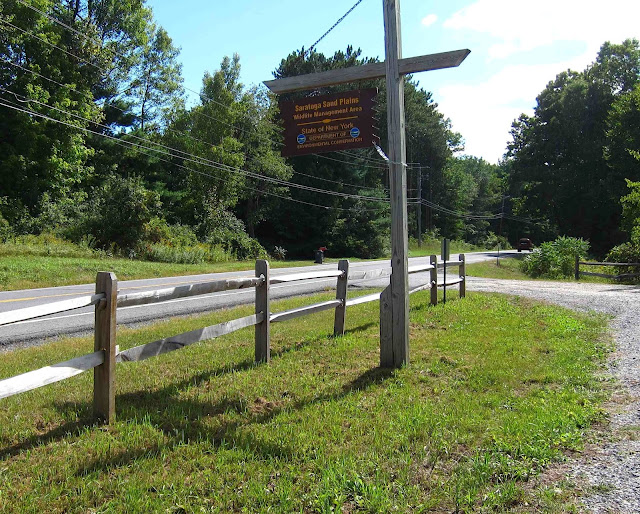 Here's what this same site looked like one year ago. 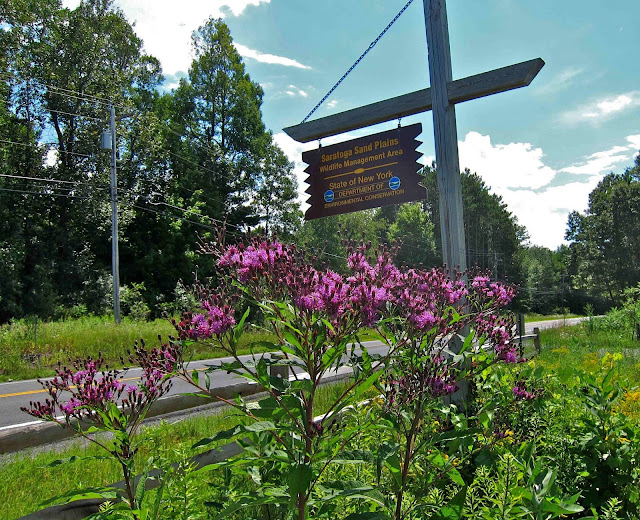 I remember being so very pleased to see how the Ironweed was thriving here, producing more stems in glorious bloom than ever before.  It towered over the other native plants -- goldenrods, asters, and milkweeds -- that shared its plot, attracting numerous butterflies, bees, and other pollinators to its gorgeous purple flowers.  I felt so privileged to be able to gaze on it here, so far from other sites in the state where this rare plant has been reported.  And now it is gone.  Not an inch of its sturdy stalks could I find, in all the close-shorn stubble.

Nor could I find any trace of another unusual plant I used to find here, the Late Purple Aster (Symphyotricum patens).  This pretty purple flower with oval clasping leaves tends to grow further south in the state, but it somehow had made it to Wilton to bloom within a few feet of the Ironweed, in this little patch of unmowed land.  Or what USED to be unmowed land.  Now it is gone forever.  Why some people prefer the look of featureless stubble to the glorious mix of colorful wildflowers, is a great mystery to me. And I sure am angry about it.  Two plants that I've never found anywhere else have been destroyed, and for no good reason. 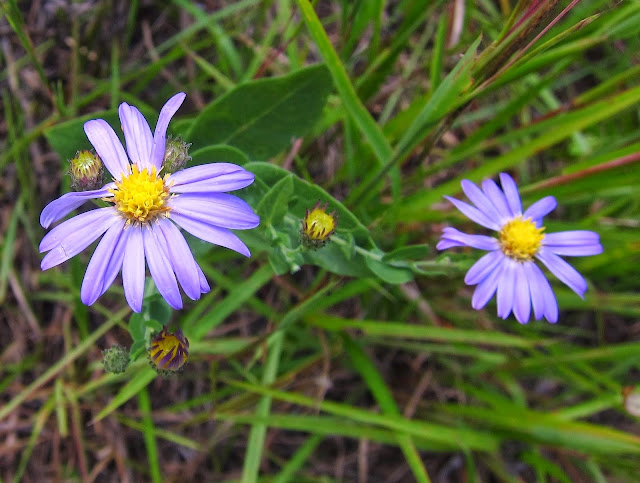 Update:  Actually, since both the ironweed and the aster are perennials, they will probably come up again next year.  But since they need their leaves to provide nutrients to their roots,  if they get mowed down again every year, they will die out for good.  But Margo Bloom Olson, the executive director of the Wilton Wildlife Preserve and Park, is doing whatever she can to make sure this area is never again mowed during the growing season.  She was not aware that this mowing occurred and would not have allowed it, since this parcel of the Wilton Wildlife Preserve and Park is especially protected as a breeding site for the endangered Karner Blue Butterfly.


I went looking for another oddity today, not a plant but rather a freaky fungus/fly interaction I'd encountered just a year ago at Moreau Lake State Park, and I wondered if I would find it again.  And I did. Right in the same patch of Common Milkweed where I'd found it before, near the parking lot for the beach.  The milkweed flowers had long gone to seed, and the leaves showed no signs of Monarch caterpillar feeding, but when I overturned many of the leaves, I found the same strange phenomenon I came upon last year:  a bunch of dead flies, all stuck tight to the undersides of the leaves, the segments of their abdomens bursting with some kind of strange brown stuff. 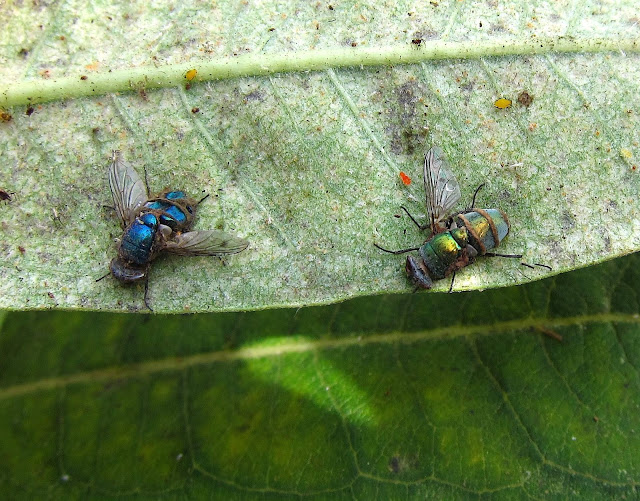 Here's a photo I posted a year ago, of a fly in the same situation and in the same milkweed patch.  I didn't have any idea what was happening here, but one of my readers did.  Kathie Hodge,  a professor of mycology at Cornell University informed me that these flies were infested with what she called an "Entomophthora" fungus, the word meaning "insect destroyer."  And destroy these flies, this fungus certainly did! 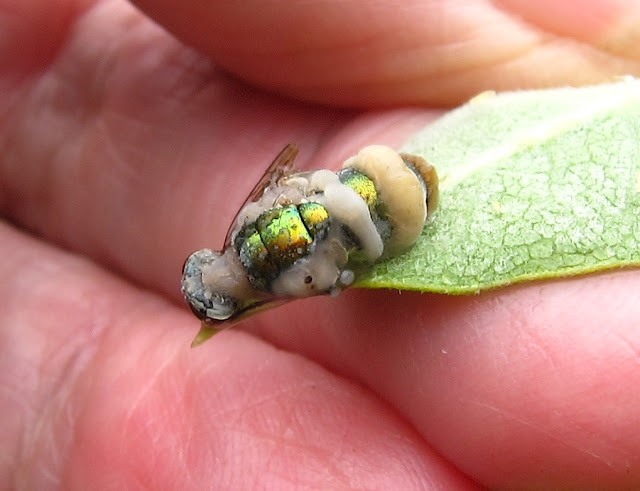 This particular fungus produces spores that land on the fly's body, where they germinate and penetrate the fly's exoskeleton.  Some scientists have reported that this fungus can affect the brain of the insect, controlling its action and forcing the fly to crawl up to the highest nearby vegetation, thereby obtaining an advantageous spot for wind distribution of the fungus's future spores.  When the fly reaches this highmost spot, the fungus causes a substance to grow around the fly's body that will bind the fly to the leaf, thus cementing it there even after the fly has died. The fungus continues to grow inside the fly's body, digesting its innards and eventually killing it.  Cracks open in the fly, and the fungus exits the interior to form sporangia on the fly's surface.  These sporangia contain the new spores, which are forcibly shot off, to land on other flies and continue the cycle.

Sounds pretty horrible, doesn't it?  But also pretty amazing!  It's hard to imagine how a fungus could strategize a way to control an insect's behavior for the fungus's own benefit.  And there's even a potentially "good" use for this Entomophthora fungus as a biological control of harmful insects, creating bio-insecticides that are specifically targeted for certain insects, while being harmless to others.

Anyway, I find such interspecies interactions absolutely fascinating, and I was glad to find evidence of this phenomenon just where I found it last year.

But I'm still really mad about that Ironweed getting mowed down.
Posted by Jacqueline Donnelly at 12:11 AM

I'd be mad about the Ironwood too! Maybe just out of complete ignorance! But a very interesting fungus.

Unfortunately the neat freaks are everywhere. Here the Dept. of Transportation has been cutting all the trees and shrubs within the right-of-way fences along limited access roads and has been carrying on a chemical war against staghorn sumac along all their roads. It's obvious that sometimes agencies just have too much funding or set the wrong priorities for what they do have.