I've been having my mind blown by Nature this week.  Yesterday I found those zombie flies glued by a fungus to milkweed leaves.  Today I found a fungus that looks like a dog turd and which actually draws pollutants out of the soil.  And  last weekend I found a little red beetle whose larva creates an ant-repellant shield out of its own feces.  Nature is just amazing!

Here's a photo of that Dog Turd Fungus (yes, that's really one of its common names!) shedding brown powdery spores all over a sandy path at Woods Hollow Nature Preserve near Ballston Spa. 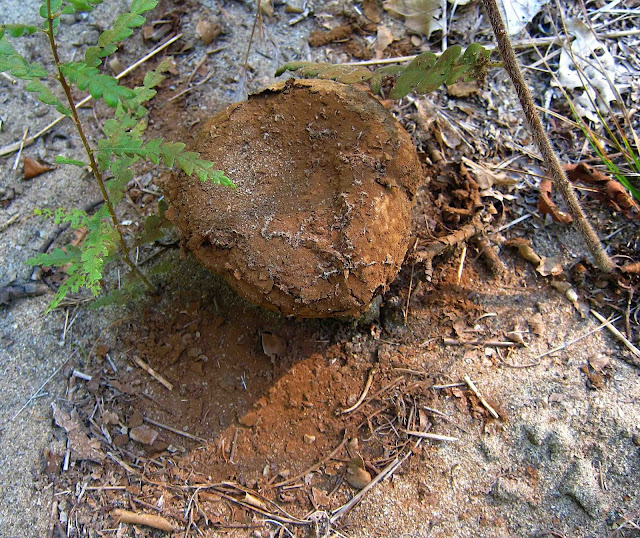 This is the fungus called Pisolithus tinctorius, or Dyemaker's False Puffball, in addition to that ruder name that refers to its lumpy brown appearance.  It grows under conifers and oaks in very poor soil, drawing its nutrients from the roots of these trees. 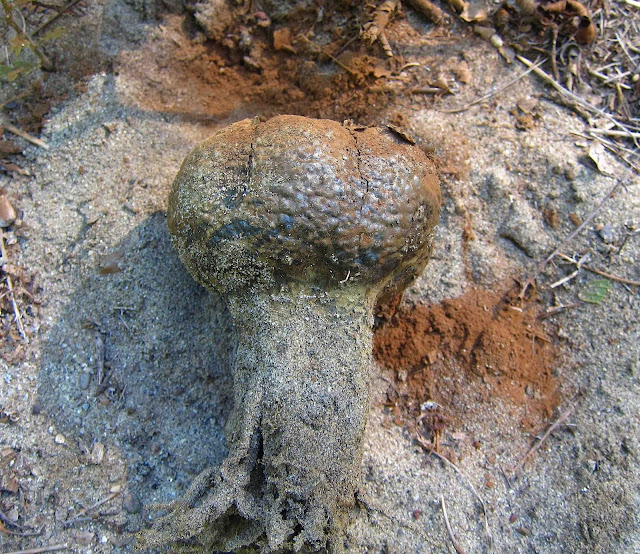 Although it's not very pretty, this fungus can be very useful in reclamation and reforestation of disturbed and polluted soils, such as strip mines poisoned with heavy metals, since it can thrive in acidic and nutrient-poor soils.

When this fungus is fresh and before the spores are ripe, it can be used to dye wool a reddish brown color, hence the common name Dyemaker's False Puffball.  Its scientific name, Pisolithus, literally means "pea stone" and refers to the pea-shaped peridioles (the spore-producing parts) seen in the interior of the fungus when it's broken open.  The "tinctorius" part of its name refers to its ability to produce a dye. 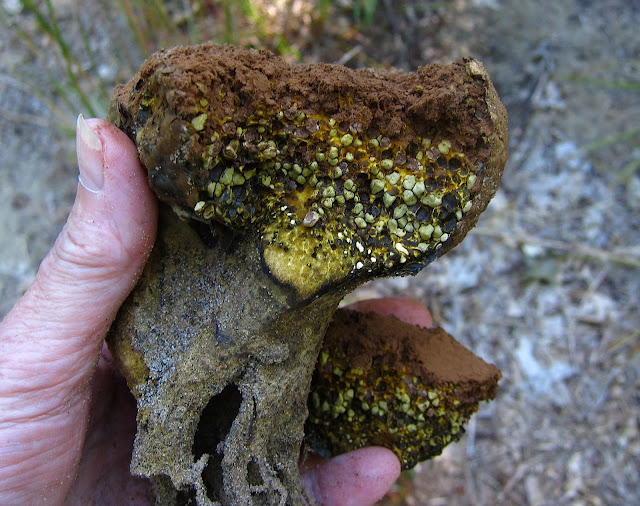 This pretty little red-and-white striped beetle was crawling on a Staghorn Sumac leaf when I found it along the Hudson River at South Glens Falls last Saturday.  As I later learned (many thanks, BugGuide.net!), the sumac shrub was exactly the right place to find this Sumac Flea Beetle (Blepharida rhois). 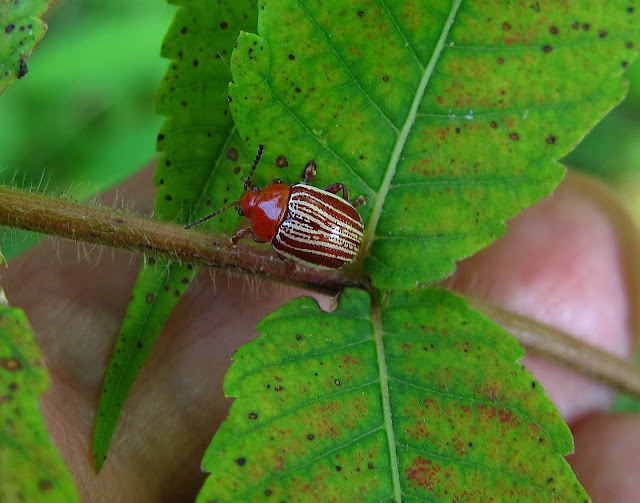 I have since read, on a website called "Chemoecology," that both adults and larvae of this beetle are dietary specialists that feed only on sumac.  After ingesting the sumac leaves, the larvae, instead of discarding their feces, paste it on their backs to form fecal shields that protect it from attacks by marauding ants.  Scientists have determined that the protection these shields render is more chemical than physical.  Apparently, there are substances found only in sumac leaves and excreted in the feces that provide this kind of protection.  When the larvae are fed a substitute diet, their feces does not contain the protective chemicals, and the fecal shields prove to be ineffective.

Wow!  I learn something new almost every day.
Posted by Jacqueline Donnelly at 11:13 PM