What crazy weather!  Still in the 40s on Monday, but by Wednesday this week the temperature in Saratoga hit at least 80 degrees.  What a great day for my friend Sue to have off from work (it was her birthday!), so we could go for a nice walk along Bog Meadow Nature Trail.  I'm recovering from cataract surgery I had on Monday, so I'm not supposed to exert myself strenuously for a while, and Bog Meadow offers easy walking along a straight level trail. 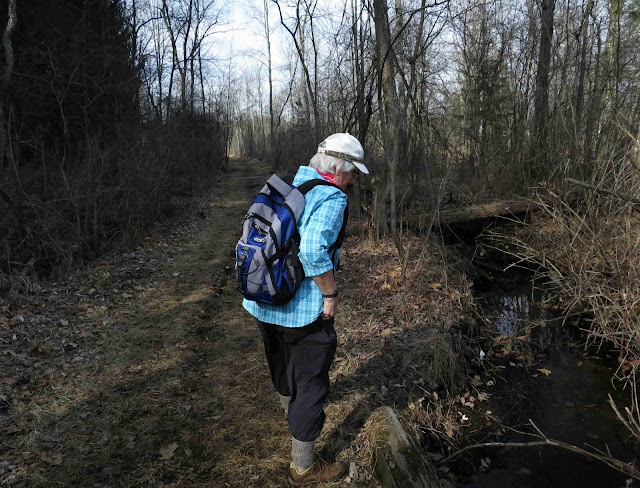 Of course, we were looking for signs of spring, but the first thing that caught our eye was a plant left over from last year that had made it through the winter with its (empty!) seed pods intact.  Sue spotted it first (my vision is still quite blurry from the surgery), and noted that it seems to have grown from a bulb-like base.  Well, neither one of us recognized what its flowers might have been, but we're hoping maybe one of my blog readers might recognize it.  I can't believe I never noticed it when it was blooming.  The pods are kind of orchid-like.  Maybe Helleborine? 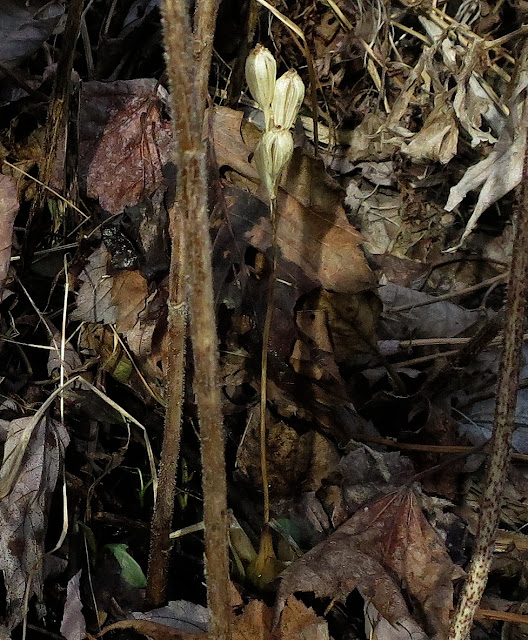 UPDATE:  This is an orchid, all right, but not Helleborine, as I wrongly surmised.  Our dear friend Andrew Gibson has suggested this is most likely Liparis loeselii, also known as the Yellow Wide-lipped Twayblade Orchid.  Orchids are Andrew's botanical passion, so if anyone would know, he sure would.  I've never seen this plant before, so I'll be careful to search for it when it's in bloom. 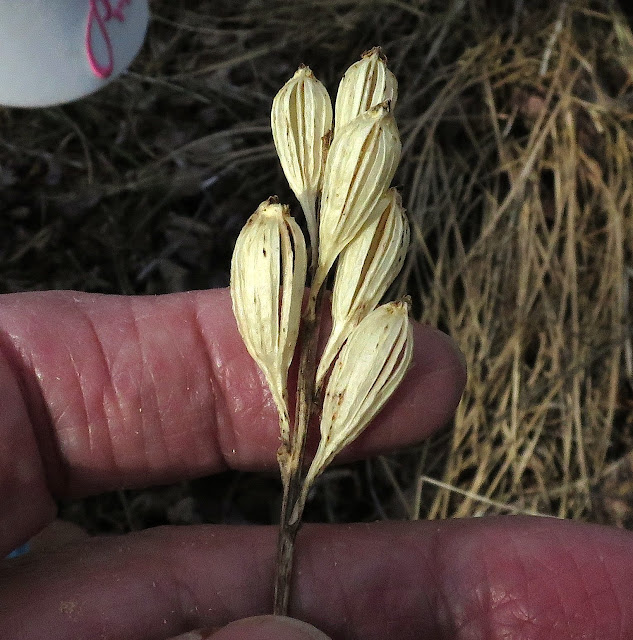 For being such a warm sunny day, things were oddly quiet along Bog Meadow Trail.  The unseasonable warmth got our hopes up, but truly, we were not surprised to find the Skunk Cabbage spathes still tightly closed, nor did we hear any Wood Frogs or Spring Peepers.  The standing water remained quite solidly frozen in many places.  But if the temps stay above freezing this week, I bet it won't be long before spring things start to happen in a hurry.

Thursday, while balmy, was not as warm as Wednesday, and it also rained most of the day.  But just a nice misty rain, the kind that doesn't interfere with taking a pleasant walk through the park.  That's what Goretex is good for.   Congress Park in downtown Saratoga Springs looked rather pretty veiled in fog. 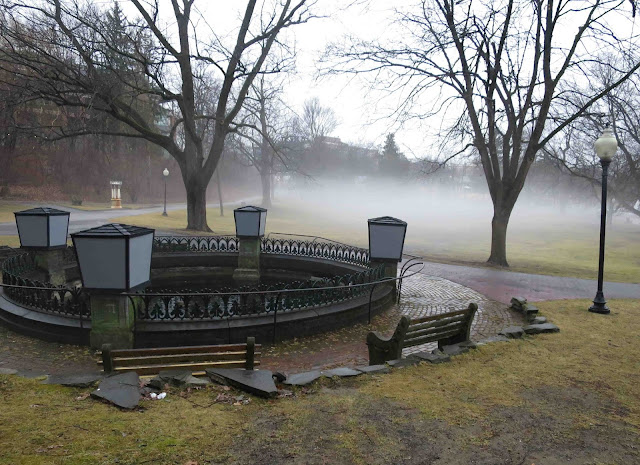 I noticed the boughs of a big Silver Maple were laden with swelling flower buds, so I pulled a branch down to take a closer look. 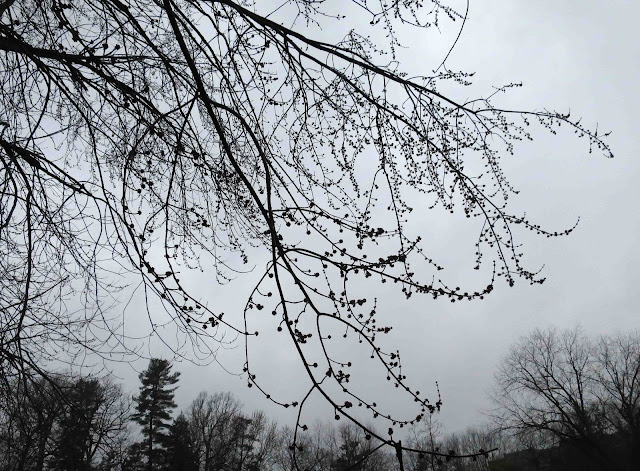 Oh yes, these are the stamen-loaded male flowers of Silver Maple (Acer saccharinum), the anthers already protruding and preparing to bring misery to allergy sufferers everywhere.  Not to me, though, since I am not allergic to tree pollen.  I'm one of the lucky ones who can delight in the beauty of tree flowers, all of them deserving of a closer look. 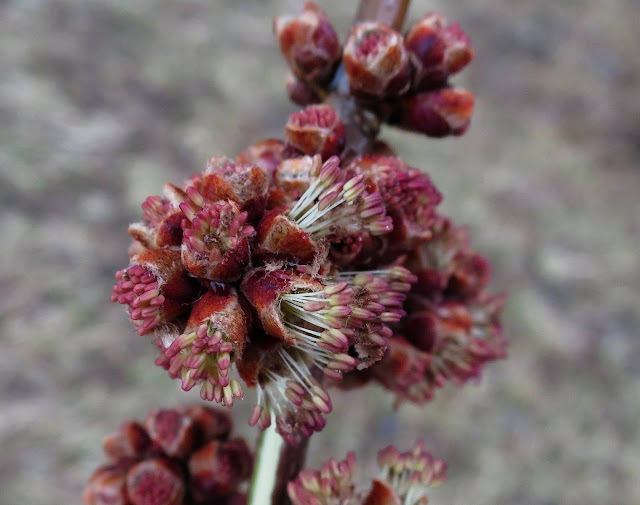 This Robin Red-breast caught my eye just before I left the park.  We used to always think of the Robin's return as a sure sign of spring, but now these birds often stay around all winter, traveling in flocks among backyard crabapple trees.  But a solitary Robin, running across the grass and cocking his head to search for worms, still rings all kind of spring chimes for me, so I share his photo with you. 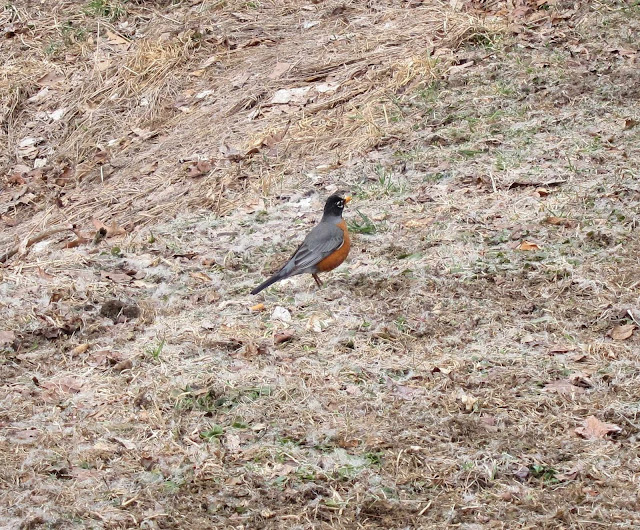 Posted by Jacqueline Donnelly at 9:22 PM

Very nice! Aren't the spring walks wonderful? Not much happening here yet, but Liz is wheezing like a leaky bellows, so we know the maples are starting to bloom. She is so allergic to them.


Wish I could help, but I have no idea what the plant is.
This time of year I see robins flocking in more numbers than the local flock of pigeons. Its almost as if there's a yearly robin conference.

Those pods remind me of gentian. There are many kinds. Maybe its one of them?