Christmas is coming.  And with it a houseful of family members,  along with the need to feed them all.  An Oscar's Smokehouse ham will come in handy for that, so I headed up to Warrensburg to buy one today, and since I was that far north already, I went another few miles along the River Road, just to enjoy the view of the Hudson River.  Nice! 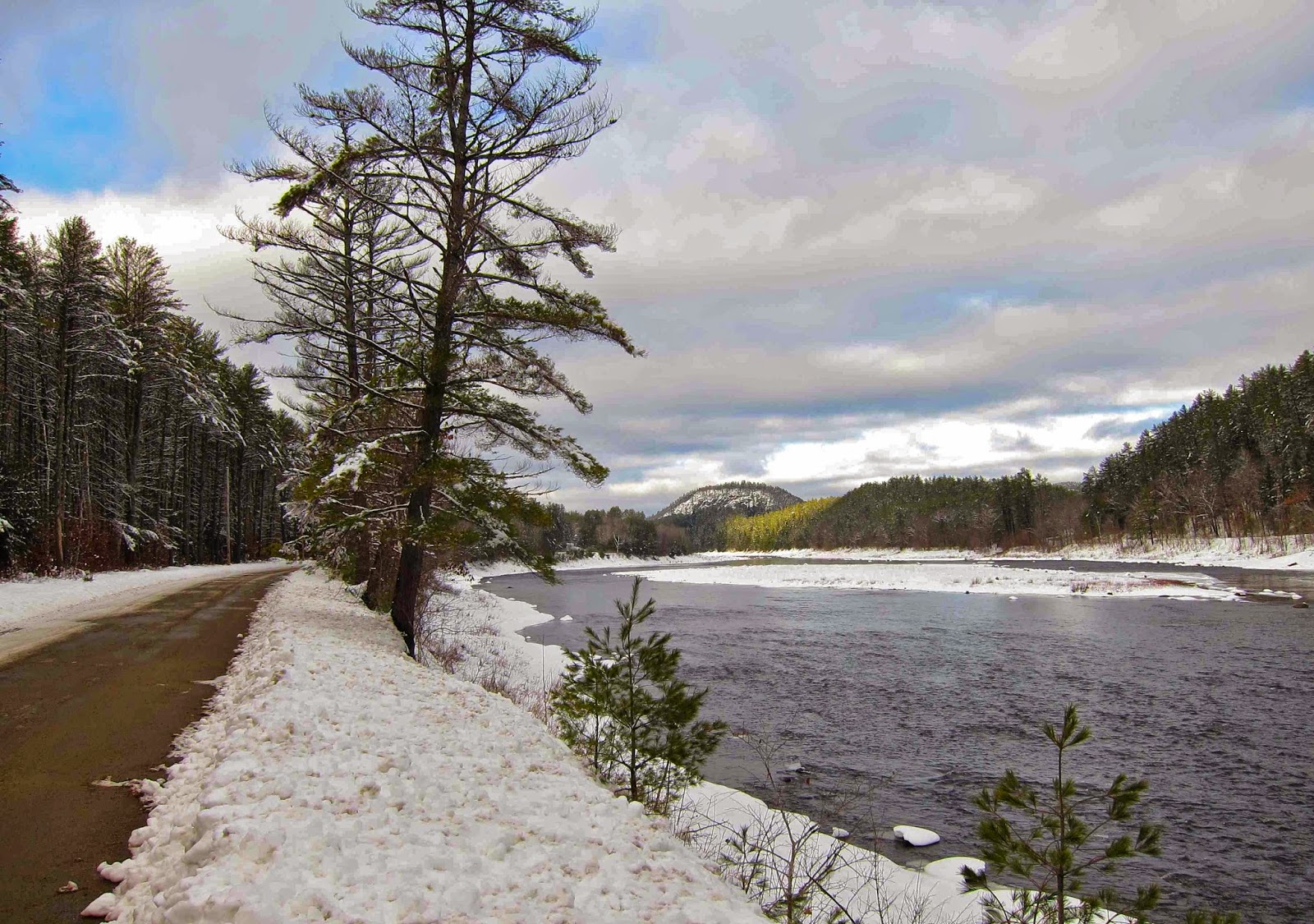 We've had some snow in Saratoga, but not nearly as much as fell on Warrensburg and on the surrounding areas.  The River Road along the west bank of the Hudson had been plowed (sort of), and here and there I passed private roads that still were covered in snow.  They looked so inviting, I wanted to turn off and follow where they went.  But I don't have four-wheel drive on my Toyota Corolla. 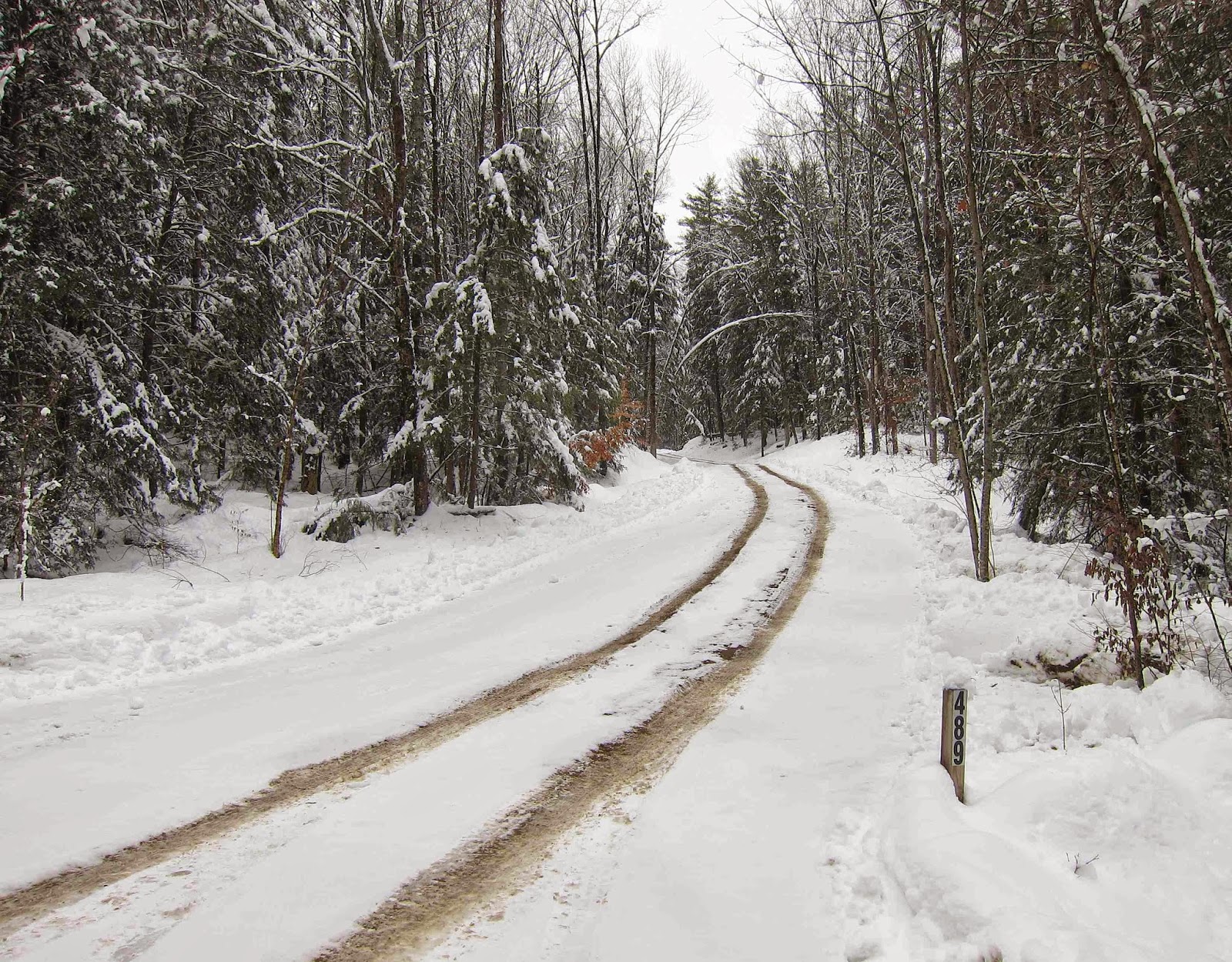 One of those private roads held a realtor's For Sale sign, so I did venture up it on foot, wondering what kind of house was hiding way back in these snowy woods.  Oh, what a perfect log cabin it was, tucked in among tall pines, and offering splendid views of the river.  Here was the house of my dreams! 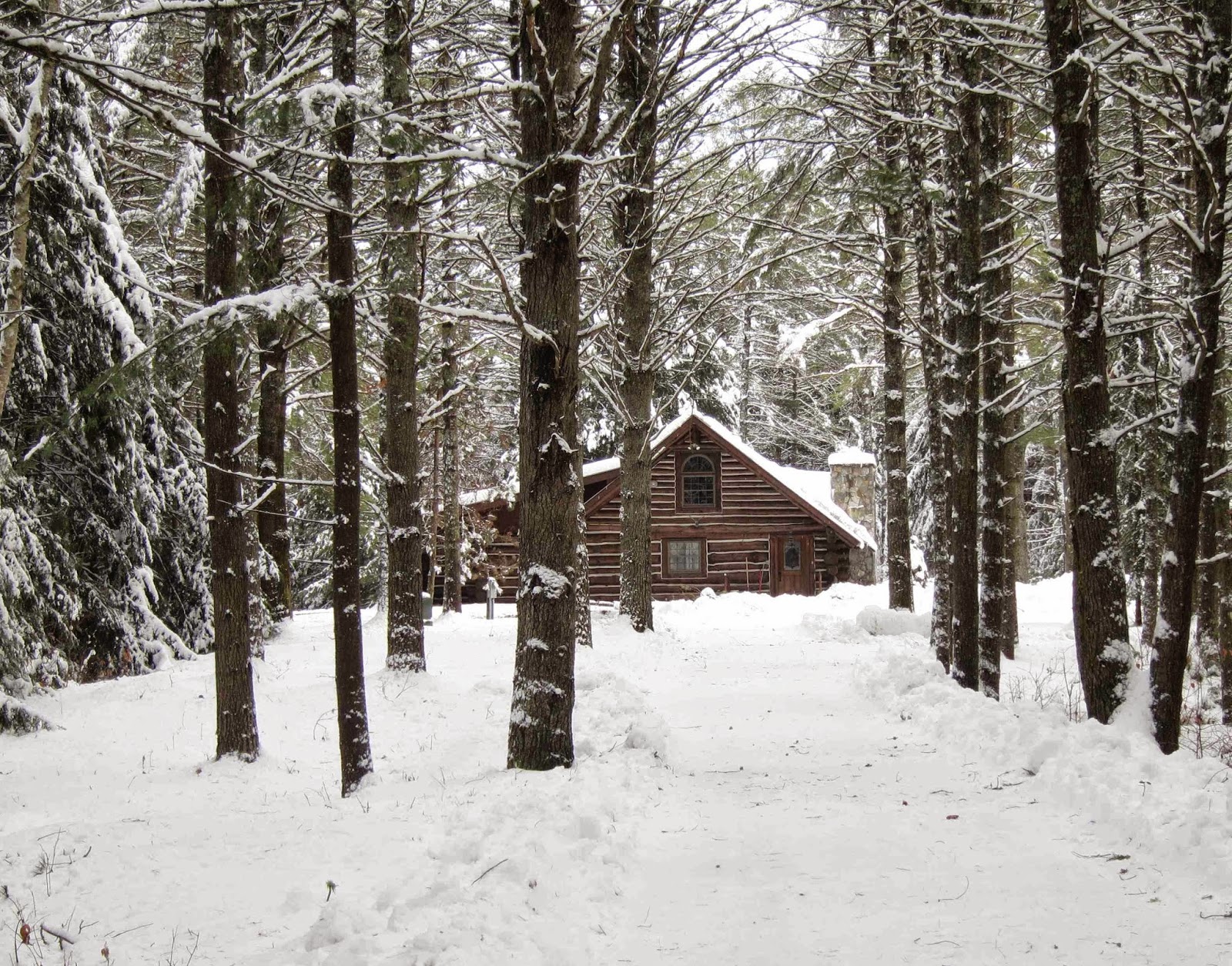 Yep.  Dream on, my dear, for when I got home and looked it up on the realtor's website, I found they were asking around a half-million dollars for it.  Yes, that includes many acres of woods and over a thousand feet of river front, but still . . . .   Guess it will have to remain someone else's dream house.


Ah well, who needs to own private acres of river and forest land, when so many wonderful woodsy and watery spots are mine for the walking, any time I want?  In fact, I discovered a new place of remarkable beauty today, thanks to a tip from some friends, who told me about a spectacular waterfall just off the Wilton-Greenfield Road.  I stopped there on my way home from Warrensburg. 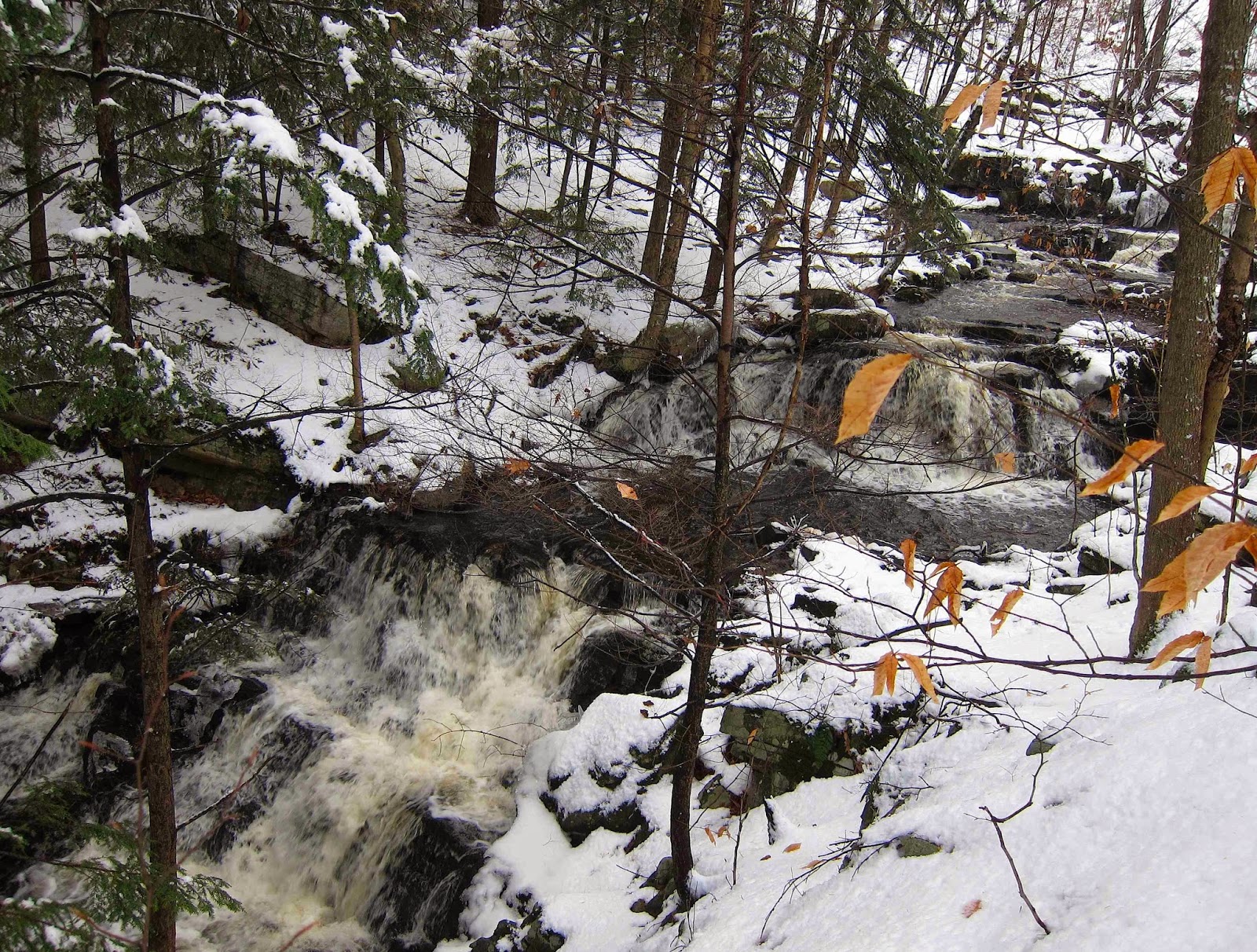 I could hear the rushing creek when I climbed out of my car, so I followed the sound as the rush grew into a roar, carefully planting my feet and clinging to trees as I clambered down the precipitous hillside.  Here the creek plunged steeply over a cliff before rolling and tumbling away at a gentler pace down the forested valley.  So beautiful!  So dramatic!  And mine, all mine, for FREE! 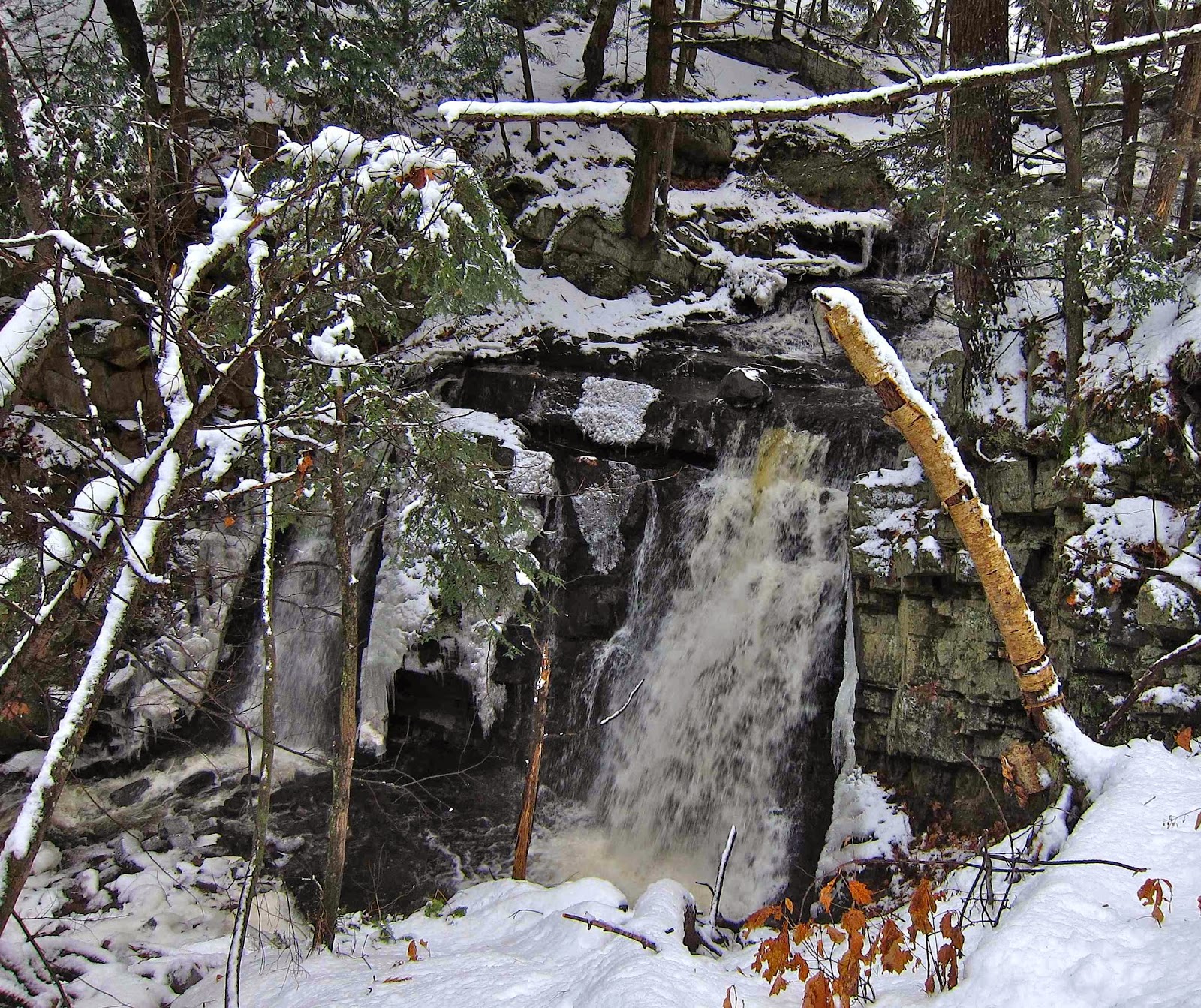 Posted by Jacqueline Donnelly at 8:25 PM

Beautiful place! Finding a new place to explore is such a bonus! Thanks for your kind approval of my blog. I've always thought your blog is one of my two favourites among them all (along with the Blonde Coyote), so I appreciate your comments!

Yes, we're so easily seduced into wanting it "for ourselves", when the best solution for us is to have such incredible natural beauty in the public domain, and think more sustainably around planned communities for housing....just my 2 ¢.
That said, a location like that would be wonderful for a retreat!
Thank-you for sharing!

Surely this is a site well worth seeing.