Today is the second day of Christmas, and our family has just begun to celebrate this special season, unlike the rest of America, which has been playing at Christmas since even before Thanksgiving, it seems, and now thinks Christmas is over.  Some Christmas trees have already appeared at the curb, while we have just put ours up two days ago on Christmas Eve. And it was only a few days ago that I brought our decorations down from the attic, adorning the mantel and breakfront and doorways with all the appropriate symbols of the season, using the long-loved ornaments from many Christmases past.

Just as I'm hanging the same shiny balls and glittering stars that we always hang on the tree, and setting up the same nativity sets in their usual places of honor, I am bringing back my Christmas posts from several years running. I have enjoyed re-reading these posts, and I hope that you, my readers, will enjoy revisiting them, too. 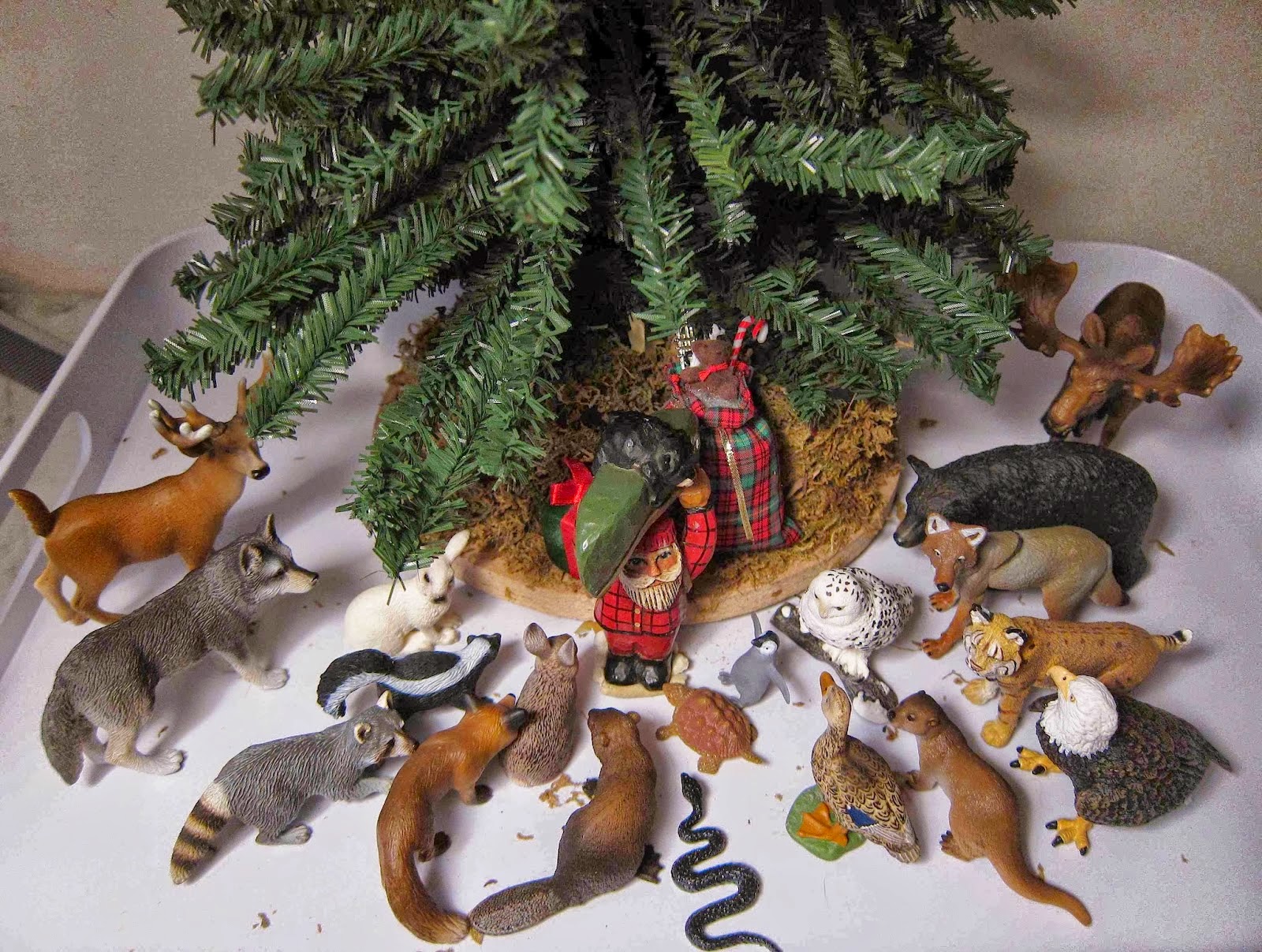 Each year at this time, I set up a little shrine to dear Santa and gather around him all the woodland creatures who live in the North Woods -- or at least as many creatures as I can find models of.  Of course, many of these creatures would be hibernating at Christmas time or would surely be prey for the predators among them, but we trust that Santa's love for them has cast its spell of warmth and peaceableness over them, so all would be safe and well. Since I last posted this scene on my blog three years ago, he's acquired a few new friends: otter, skunk, beaver, snowshoe hare, cottontail rabbit, bobcat, snowy owl, bald eagle, and (highly improbably!) one tiny little penguin, who must have hitched a ride on Santa's sleigh as it passed over the South Pole.   The penguin and the rabbit and the Mallard hen were all gifts last year from our friend Jennifer, who also gave me the canoe-toting Santa many years ago, when she lived next door to us and saw me toting my canoe to the river almost daily.  So this is a shrine to friendship, as well as to Santa-the-spirit-of-giving and also to all the woodland creatures who represent the amazing diversity of life on our fragile planet. 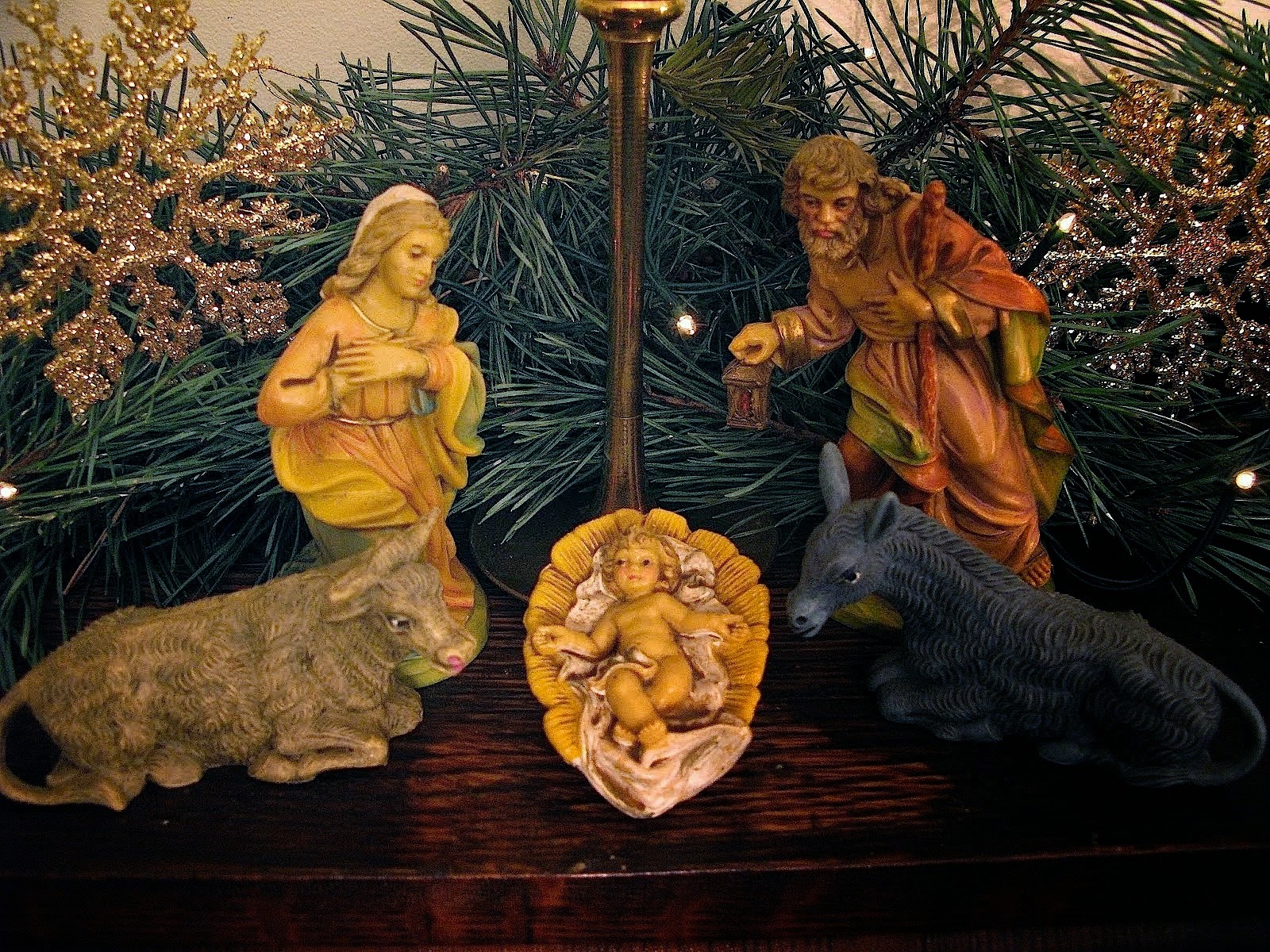 
Yes, Virginia, There Really WAS a Baby Jesus
Christmas Eve. The time has arrived to deck the halls and light the lights and arrange the creche sets in their places of honor. What a beautiful story they tell, even to those who cannot believe that Jesus was divine, or even to those Christians (like me) who turn to these infancy narratives more for their symbolic truth than for any historical fact. 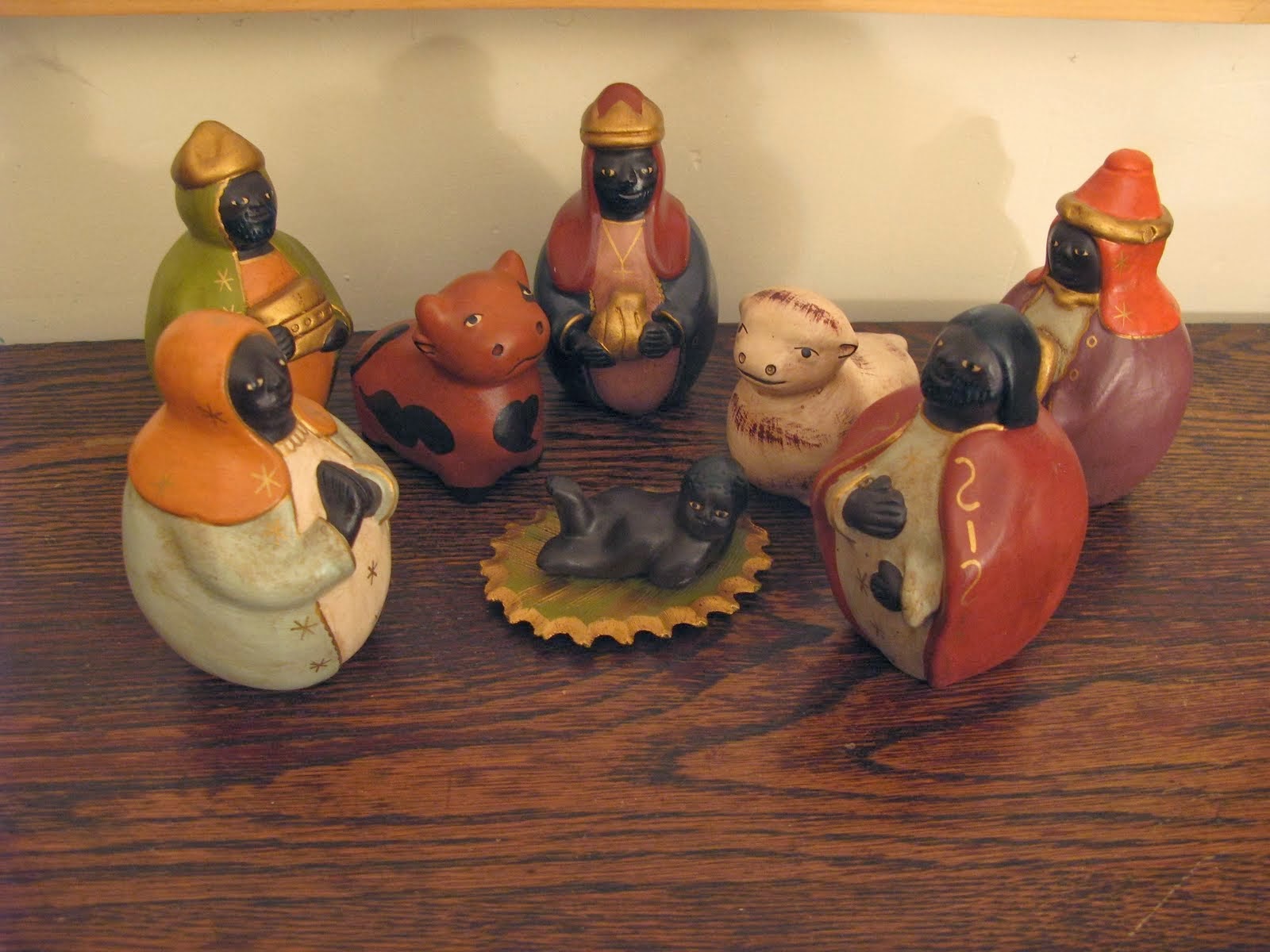 As I said before, it's a wonderful story -- even better, I think, than the one about Santa Claus, the Santa that one little girl named Virginia was once reassured was real. Well, I love the story about Santa, too. So I have a little shrine set up for him as well -- albeit with a few accretions that reflect my own heart's desires: note his lightweight canoe and abundant woodland friends.
* * *
May the peace and love that we celebrate in these Christmas stories be with you and yours not only at Christmas, but all through the year.
Posted by Jacqueline Donnelly at 11:46 PM

Nice.
Thank you for this.