Boys in the Woods

Whew!  It was a very busy week, what with Easter festivities and family visits and a birthday celebration for my eldest son.  No time to blog, since my youngest son, Peter, and his family arrived last Wednesday night to stay with us through the Easter holiday.  We were lucky the weather turned sunny and warm, so Peter and his little boys Alex and Sean could enjoy a walk in the woods with me at the Ballston Creek Preserve last Thursday afternoon.  I wanted to show them the great big birds -- Great Blue Herons, Ospreys, and a Great Horned Owl -- that were all nesting in the swamp at the edge of this preserve.

Here, Sean tries out the binoculars to get a better view of a squirrel's nest.  Little brother Alex waits his turn. 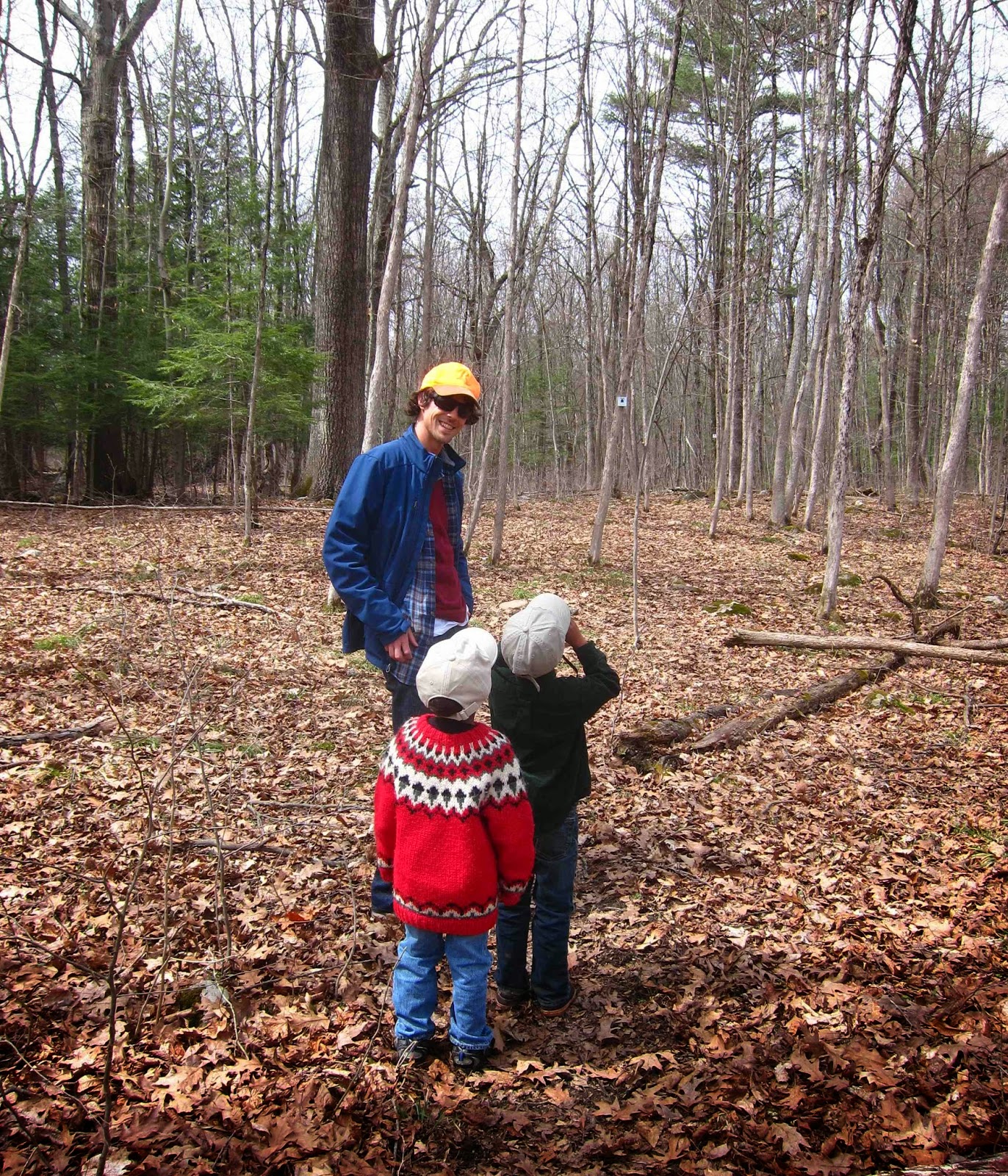 I had visited this very same swamp just a little more than a week before, which is when I took this photo of what I thought were all herons' nests.  But friends had since visited this site and discovered that one of the nests had been taken over by a Great Horned Owl.  When I looked again, more closely, at my photo, sure enough, there it was: a pointy-eared head emerging from one of the large shaggy nests (to the left, in this photo). 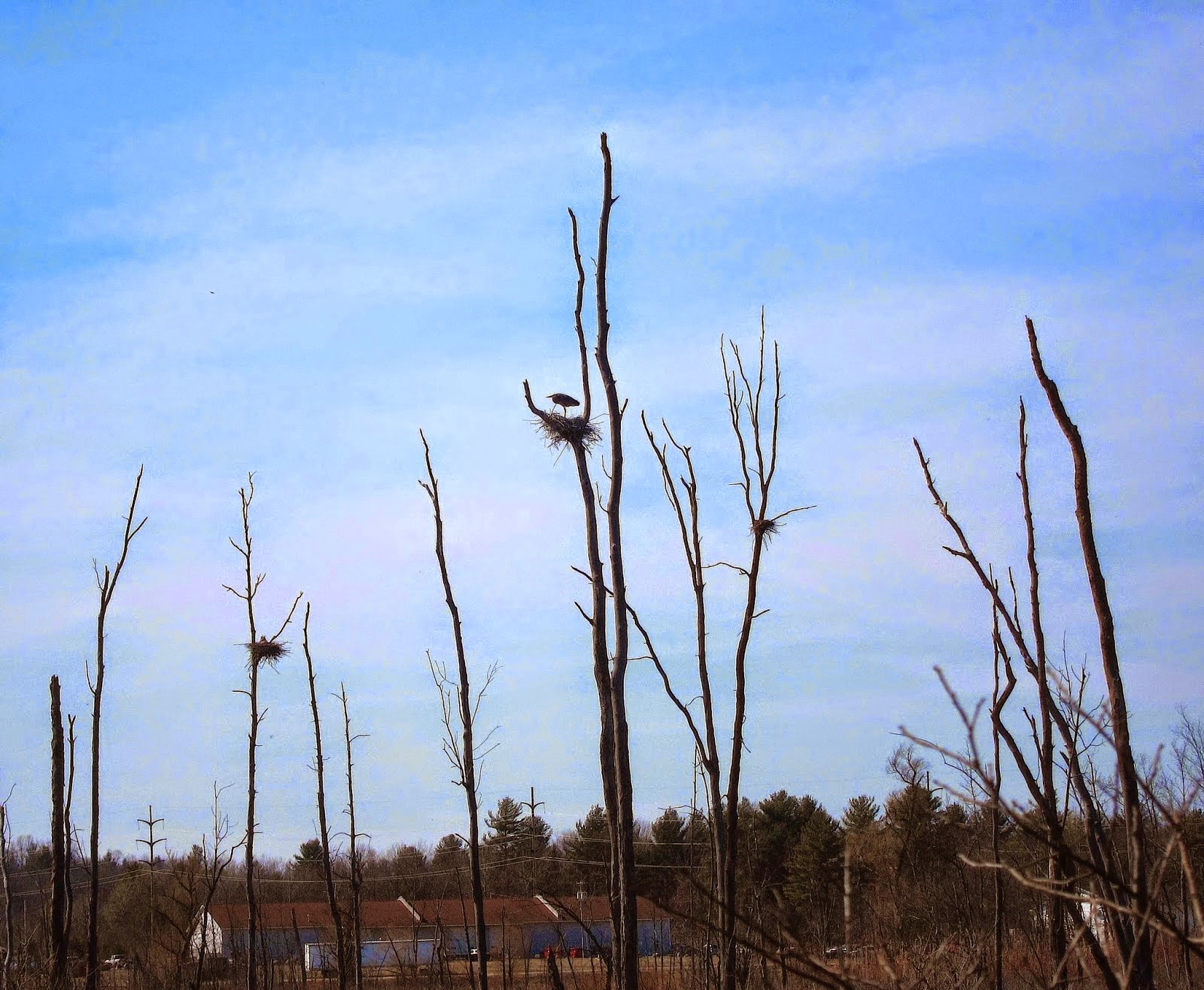 Our visit this week revealed that the owl was still right there, sitting deep in the nest.  This is a sight we don't get to see very often. 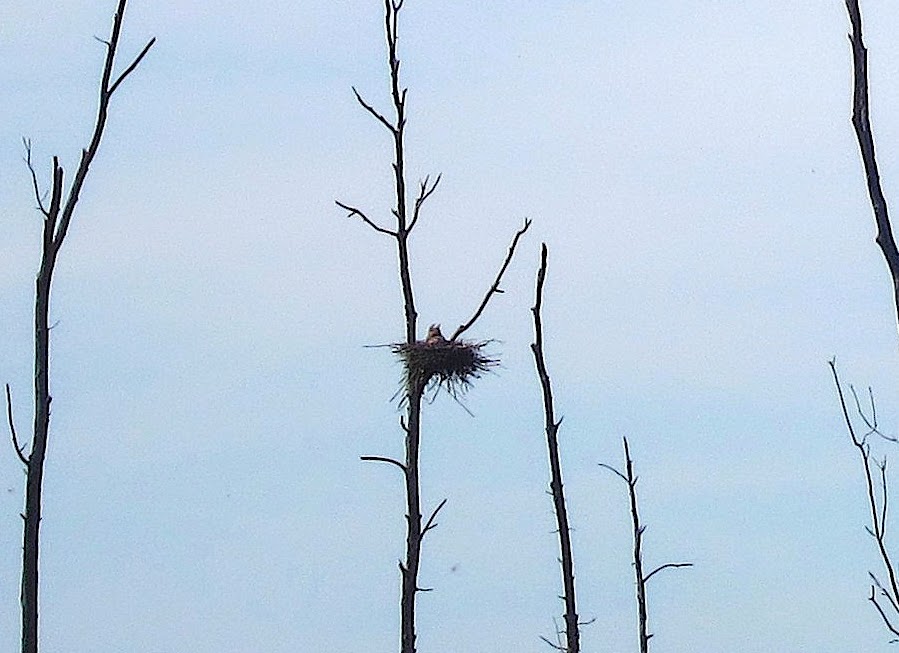 Over to the other side of the swamp, the Ospreys were busy tending to their own nest, a former heron's nest that they have been enlarging over the years they have returned to this same site.  At one point, one of the pair flew up and stood on the other's back, with a great show of flapping its wings.  I suppose the pair might have been mating, but the position did not seem quite right.  At any rate, this was behavior I had not witnessed before.


In the meantime, a large number of herons had congregated in the branches of neighboring trees, and I did observe some of them engaging in building new nests.  I wonder if these are young herons returning to their natal swamp?  Let's hope they all -- herons, ospreys, and owls -- are able to live here in peace. 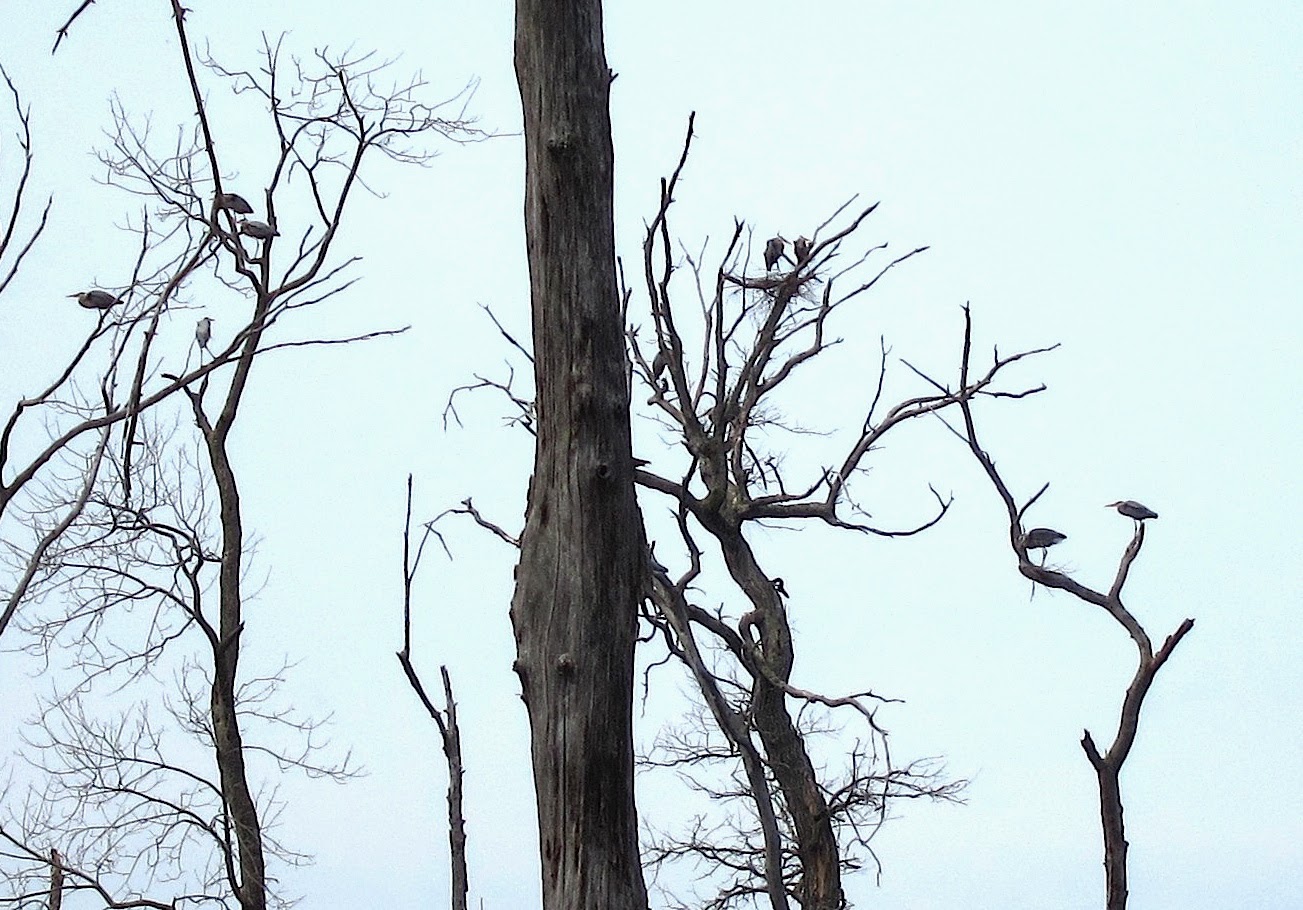 I'm not sure the little boys were all that impressed by the avian goings-on, but they sure were excited to see the pretty little pink-striped flowers growing all over the forest floor.  I was, too.  No matter how many times I have seen Carolina Spring Beauties, I am always delighted to see them anew, one of the very first flowers of spring. 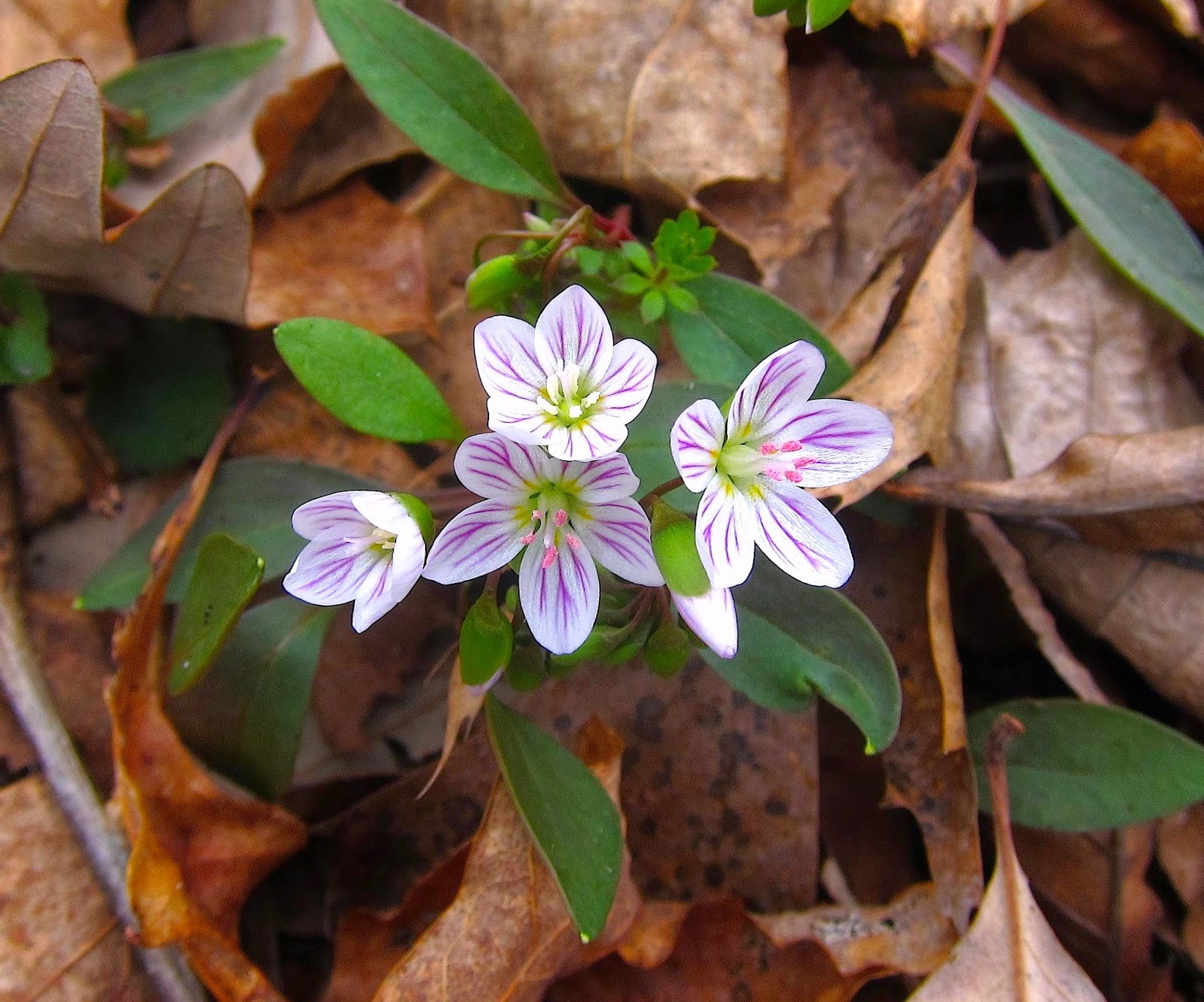 Before I could stop him, Alex had picked a couple of the flowers and held them to his nose.  His enthusiasm for all the woodland plants delighted me, but it was hard to convince him to let them remain where they grow.  At least there were hundreds of these Spring Beauties, so I guess one or two could be sacrificed to a three-year-old's excitement.


It was truly a pleasure to witness how the little boys enjoyed exploring the woods,  exclaiming over the bright red Partridgeberries they found, or hopping over the tiny creeks on stepping tones, or gathering pocketsful of goldenrod stem galls we later cut open to find tiny worms pupating inside.  Here, Alex has found something to fascinate him in the creek.  I truly believe little boys (and girls!) and little creeks are made for each other.

I had to restrain myself when I saw the bright green leaves of Ramps.  For one thing, I had been trying to impress on my grandsons the importance of leaving woodland plants where we found them.  For another, these were growing in a nature preserve, where removing plants is forbidden.  But oh, I sure do love the taste of these little wild onions sauteed in olive oil!    I hope I can find another patch somewhere in a non-protected site.  I promise I will dig no more than 10 percent of the patch.  Or maybe I will just remain contented with the memory of how they taste. 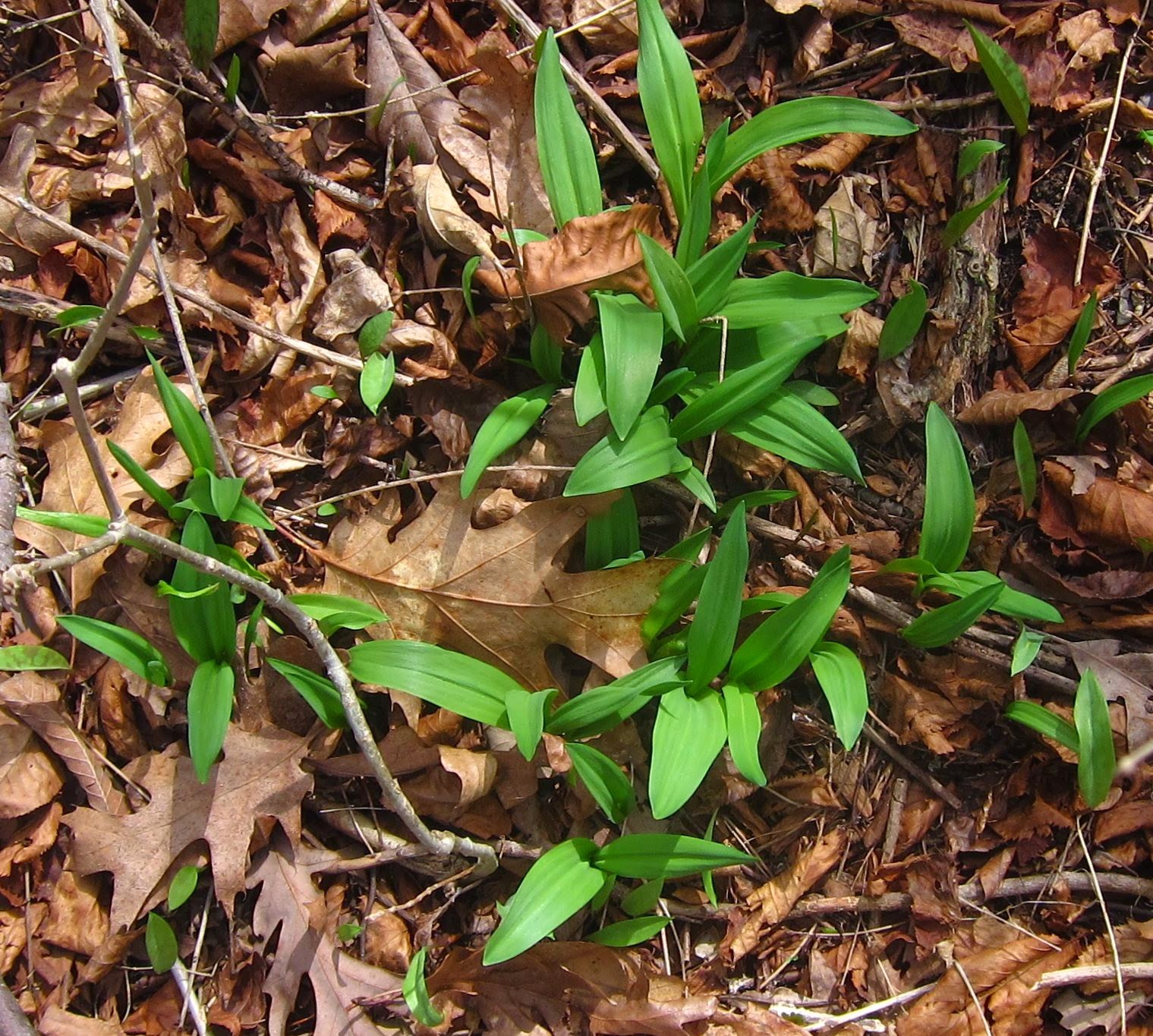 Posted by Jacqueline Donnelly at 9:59 PM

Glad to see you got the boys out into the woods - best thing my mother ever did for me! And I've never heard the term 'ramps' before for what I know as leeks.

Yes, Furry, all kids should have a chance to play in the woods. I was lucky enough to have been allowed to run wild in the woods as a kid, but these days my folks would be accused of child neglect for this. Ramps is a pretty common term for wild leeks in New York. I'm surprised that usage hasn't spread to Ontario.

Wonderful to see your grandchildren enjoying the woods. Nothing like grandchildren to remind us of our most important jobs in life. You have done well to provide them with parents who will continue your "work," ensuring the next generation will care about their environment!