Another not-very-springlike day.  But at least the sun came out in the afternoon, after a cold and briefly snowy morning.  Longing to feel bare earth beneath my feet, I drove south to where the Mohawk River forms the southern boundary of Saratoga County.  I was hoping to find the trails at Vischer Ferry Nature Preserve free of snow and ice.  Well, they weren't.  But I took a walk on them anyway. 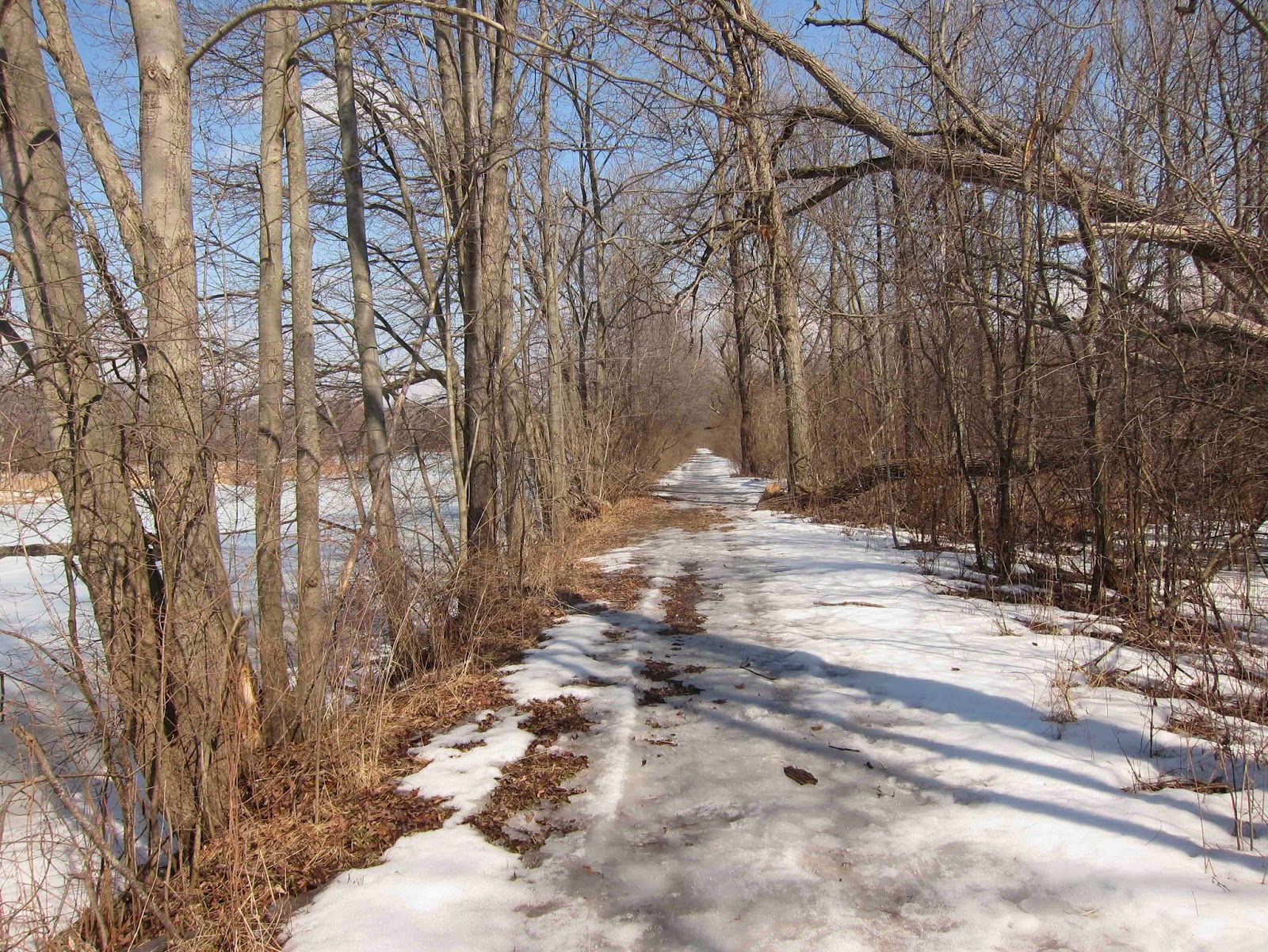 There are miles and miles of trails at Vischer Ferry Nature Preserve, but because the wind was piercing and the footing was slippery, I did not venture far into the preserve to approach the Mohawk River, but rather took the nearer trails that led along portions of the old Erie Canal and towpaths.  These wetlands provide valuable sanctuary for migrating and resident waterfowl, but since they are still frozen over from shore to shore, no ducks or geese were evident today. 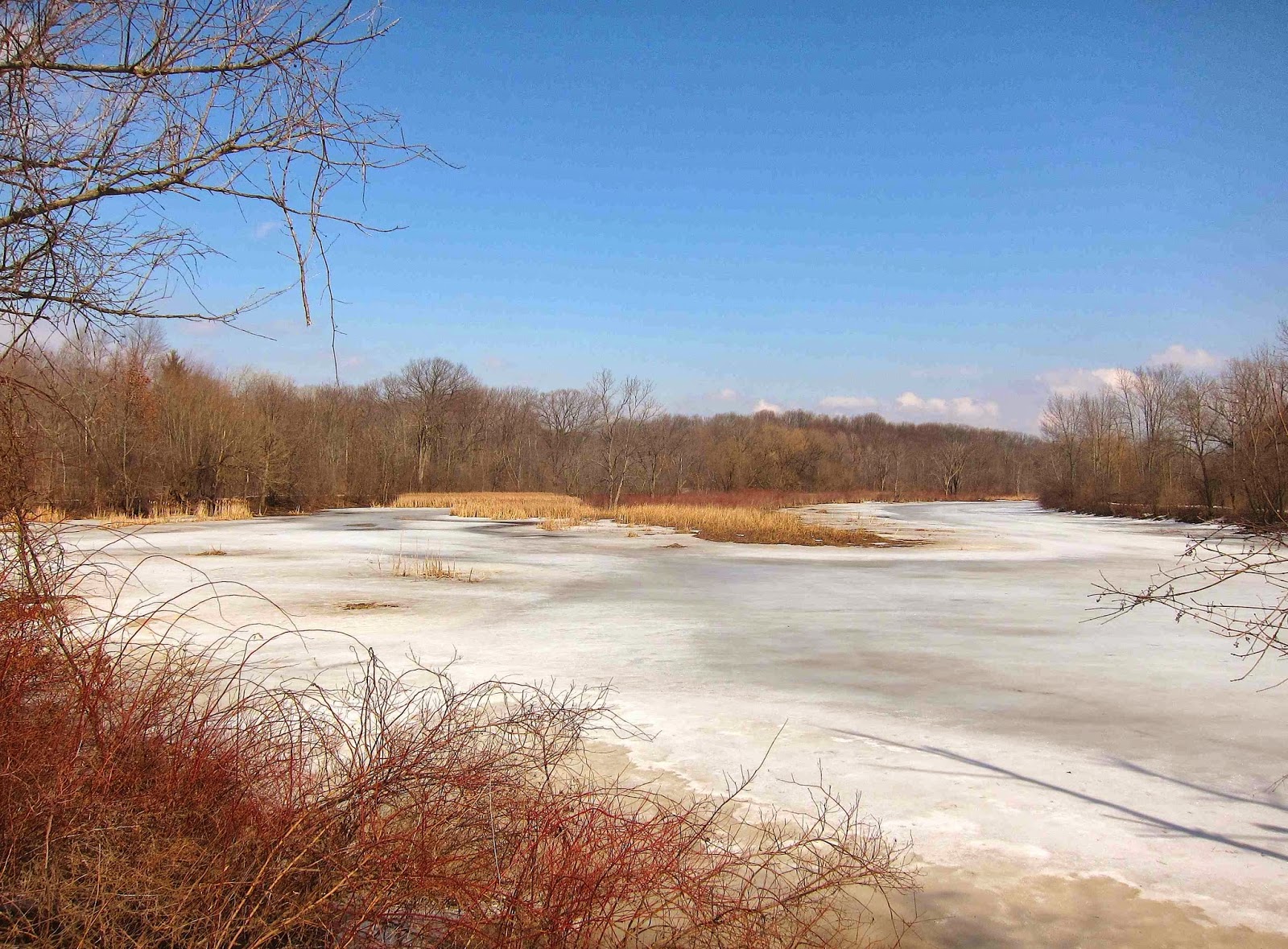 The trails are lined with many kinds of shrubs, including American Hazelnut, Silky Dogwood, Northern Prickly Ash, and at least two species of alder.  One of the alders was much larger than the shrubby Speckled Alders I am used to finding along the Hudson, this one growing almost as large as a full-grown maple tree.  I only recognized it as an alder because of the catkins and cones that dangled from its high branches.  Could this be a Green Alder? 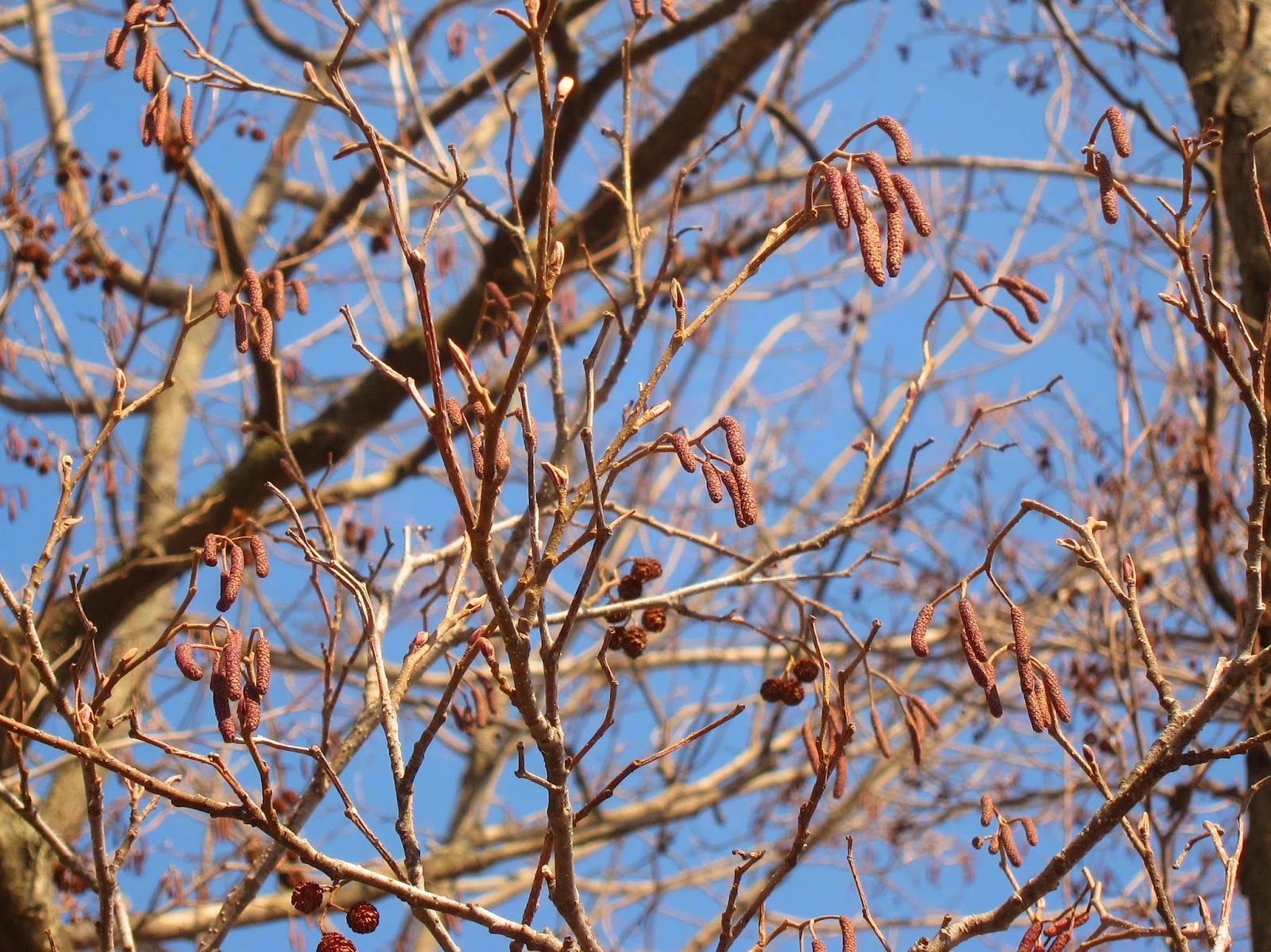 The fat thorns on these twigs make it obvious that this is Northern Prickly Ash, the only species of citrus tree that grows this far north.  I was intrigued by the little red growths atop the bud scars.  Are they new spring growth or something left over from where the fruits grew last year?  I confess I do not know. 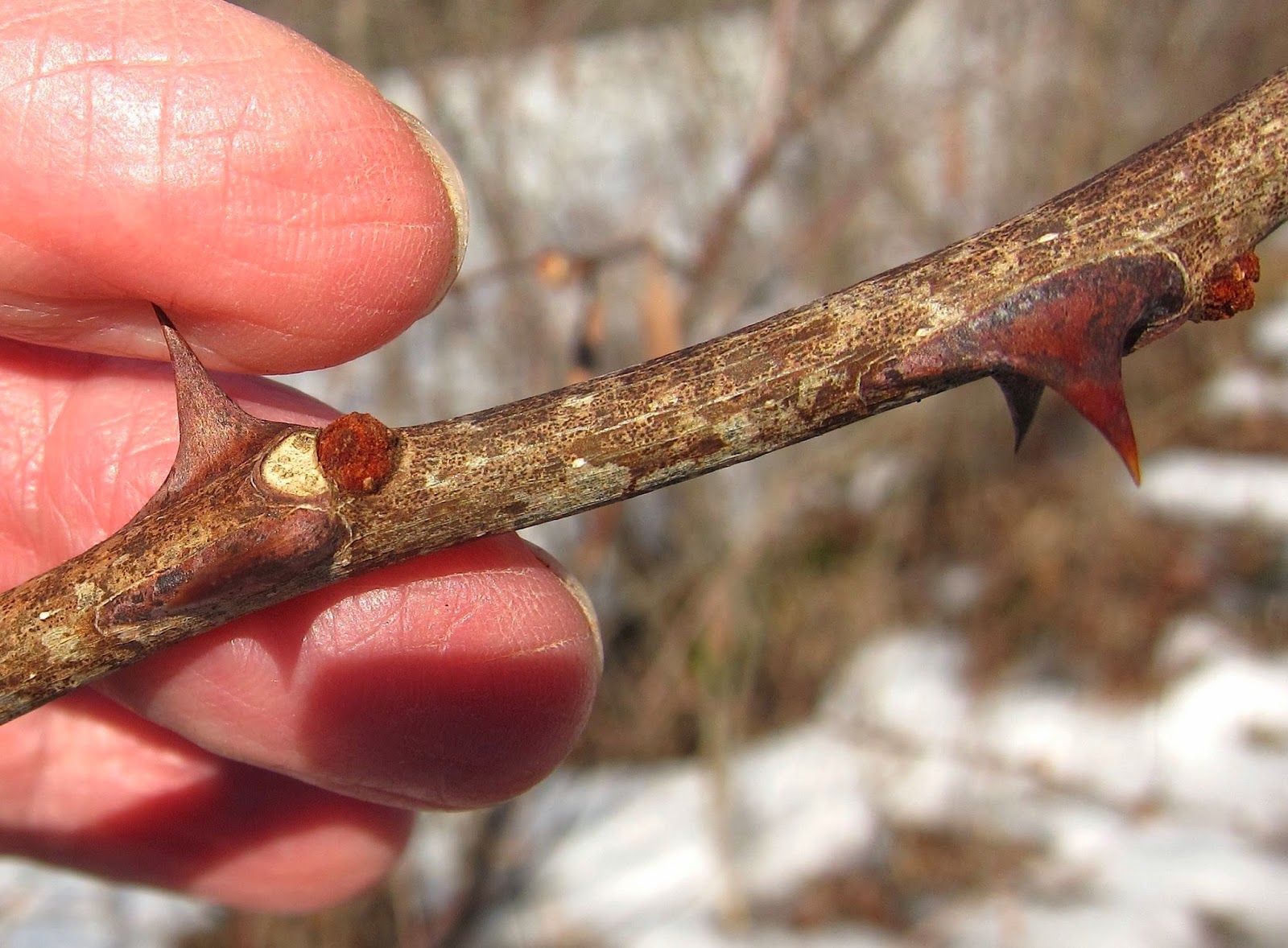 Annoyed by the slippery and muddy footing, as well as by a roaring wind that kept blowing my hat away,  I walked but a mile or so at Vischer Ferry before hurrying back to the shelter of my car.  I then spent the rest of the afternoon slowly driving the roads that followed the Mohawk and Hudson Rivers.  Although the Mohawk was solidly frozen over below the Rte. 9 bridge at Crescent, by the time the river reached Cohoes it was open from shore to shore and roaring over the falls. 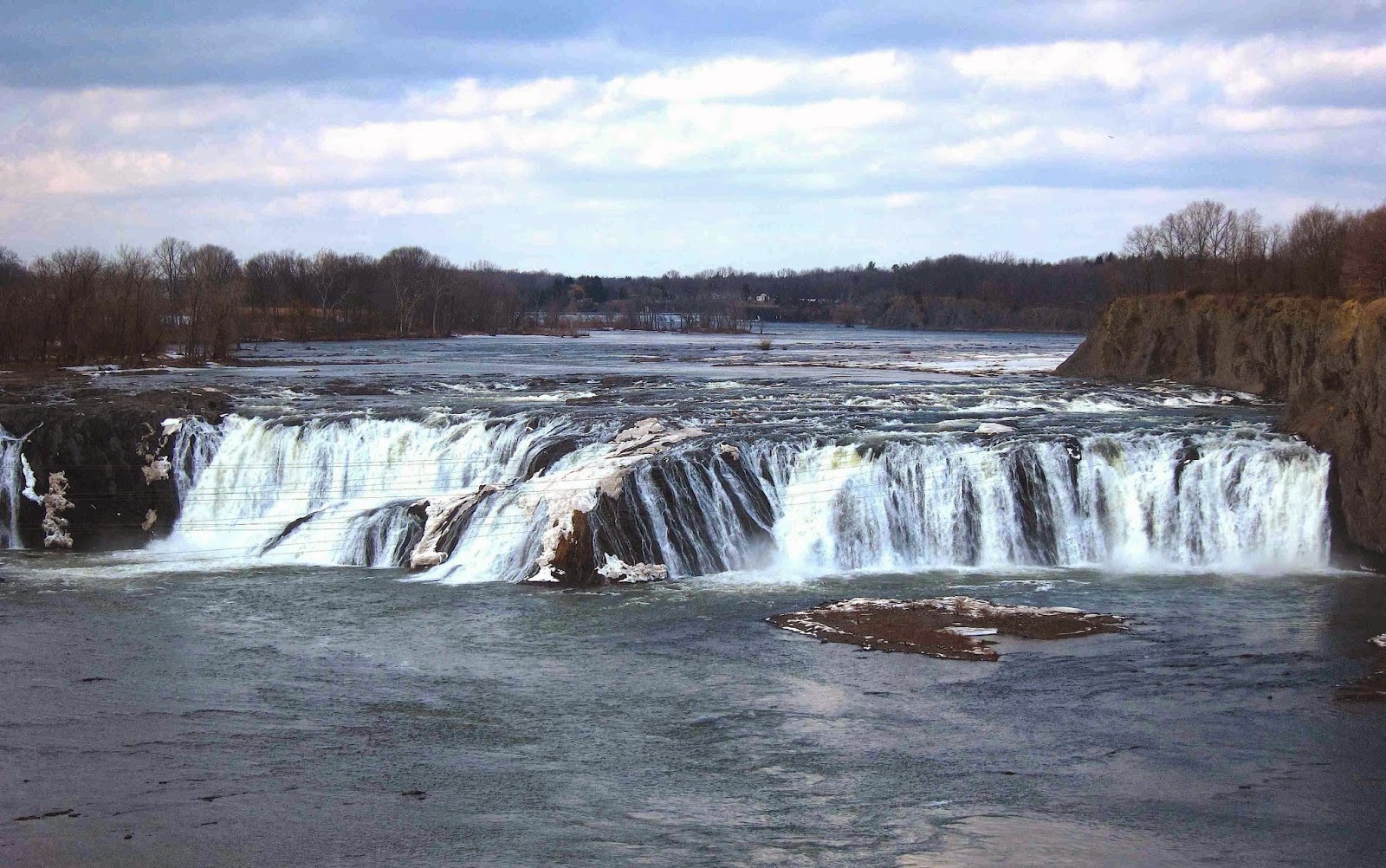 After crossing the Mohawk from Cohoes to Waterford, I then followed the Hudson River north through the towns of Mechanicville and Stillwater before turning west toward Saratoga and home.  I was intrigued by how for some stretches the rivers would be completely covered by ice, while a few miles further up or downstream the water would be wide open and sparkling in the sun.


The view of the Hudson at Stillwater was especially pleasant, with the sun-sparkled water alive with ducks and geese and gulls.  Since I did not have binoculars with me, I couldn't see which species of waterfowl were enjoying this open water, but I'll bet this would be a wonderful spot for observing many migrants. 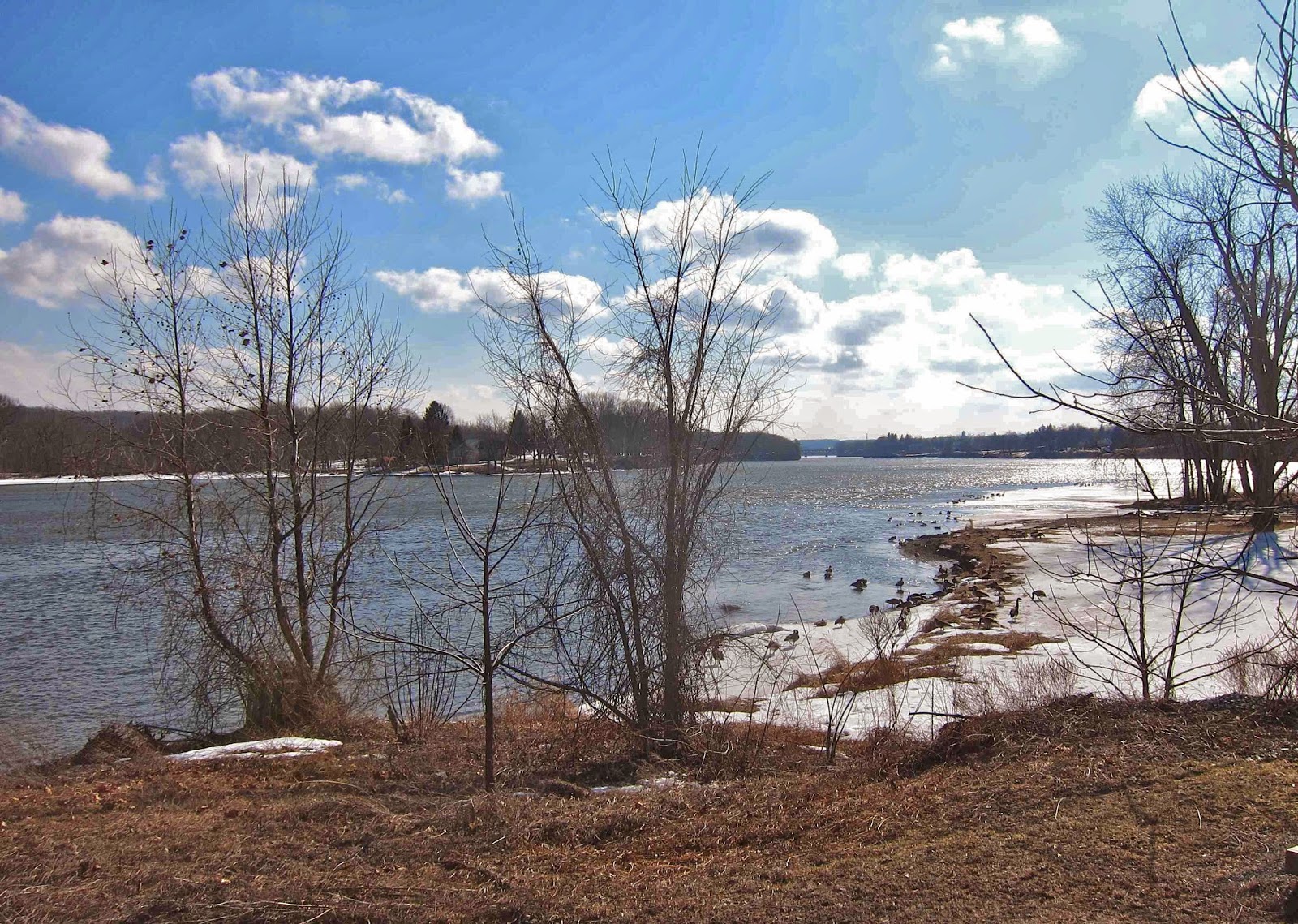 Posted by Jacqueline Donnelly at 8:56 PM

Wonderful pictures as always. You have such an eye for nature and its beauty. Thank you.

The red structure above the bud scar is this year's bud. We think the alder is Alnus glutinosa, the European alder.

Linda and Uta, thanks for stopping by. So glad you enjoyed the photos. And thank you, Steve, for helping me out with the botanical questions. I feel really lucky to have folks like you I can call on.

What a wonderful site you showed us. Nice photos by the way.