My Eagle-eyed Pal and the Rare Mountain Mint

Pal Sue with a nice patch of Whorled (or is it Hairy?) Mountain Mint
There aren't many folks who would feel as giddy as I do, over finding a plant that might be really rare.  Most folks I know kind of roll their eyes and edge toward the exits whenever I wax ecstatic over some botanical find.  But when I told my good nature buddy Sue about finding that unusual Mountain Mint -- a plant that could very likely be an endangered species -- I knew she would want to go see it, too.  For sure!

So the two of us set off this misty morning to hike the shore of Moreau Lake, searching every inch of the beach to see if we could find any more.  It's not exactly a large, showy, colorful plant (especially now, when it's not even in bloom), so it would be easy to miss our grayish-green Mountain Mint among all the other low weedy plants that thrive in the sandy soil between the high-water line and the shady woods. 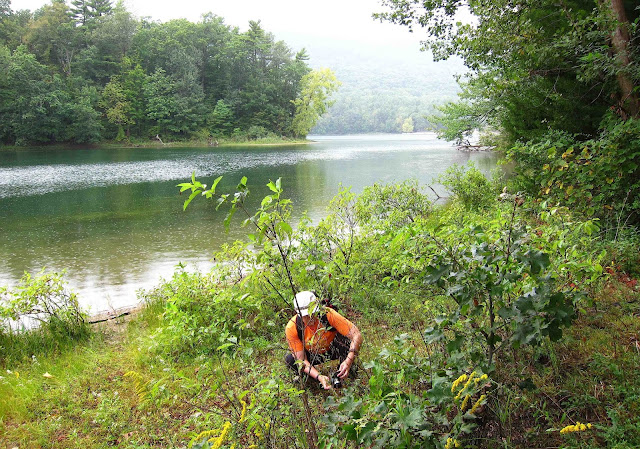 When I'd found these plants earlier this week, I'd counted only 15 specimens with flower heads, and maybe twice that many that had not borne flowers this year.  But today, with Sue and her eagle-eyed vision along, we found dozens and dozens more, happily burgeoning along one shore of a quiet cove of the lake.  By this time, it had started to rain in earnest, but we hardly noticed, whooping and hooting and even breaking into a little dance over what we considered our treasure.


Then I had a little bonus to my elation.  While searching among the weeds for our Mountain Mint, I chanced to spy a few sprigs of Slender Copperleaf (Acalypha gracilens) sharing the sandy shore.  Well looky here! -- I called out to Sue -- Here's another plant for which there's no vouchered record in Saratoga County!  Four years ago, while wandering the shores of the Hudson across the river in Warren County, I had found and collected specimens of this same unpreposessing little plant to voucher its presence for that county, but never had I seen it growing here in Saratoga County.  But then, it's a plant that sure would be easy to miss.  Those tiny orangish blurs are as showy as its flower ever gets. 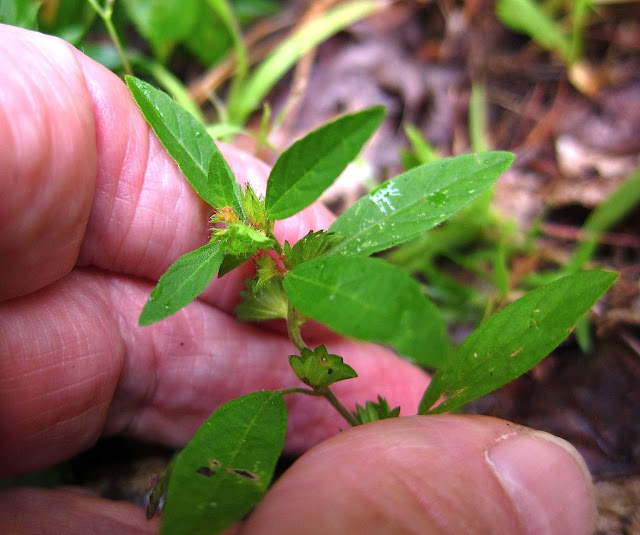 There's a far more common Copperleaf (also known as Three-seeded Mercury) that has larger leaves and which grows in every vacant lot and alley and unweeded garden plot.  Aside from the more slender leaves, the feature that most distinguishes the Slender Copperleaf from the common one is the presence of tiny glandular hairs all over the wing-shaped bracts.  This photo from my files shows those glandular hairs as well as the three-parted seedpod  that suggests the common name of both species.  The name Copperleaf refers to the color the leaves will turn as the plant matures. 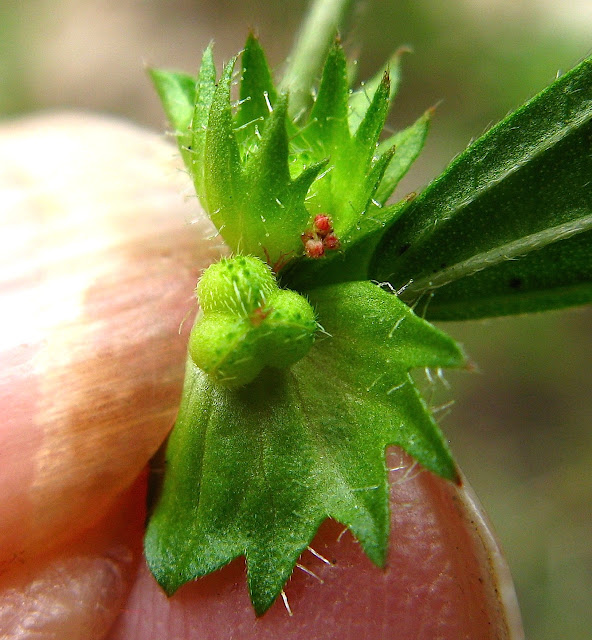 Eventually, we allowed the increasingly heavy rainfall to urge us off the beach and under the sheltering trees as we began to hurry toward our car.   But once again, we drew to a halt when Sue's eagle eyes spotted the wee little fungus called Striate Bird's Nest popping up on some well-rotted wood chips.  Even after I knew they were there, I could not see them until Sue picked up a wood chip and placed it under my nose.  These are maybe a quarter inch across. 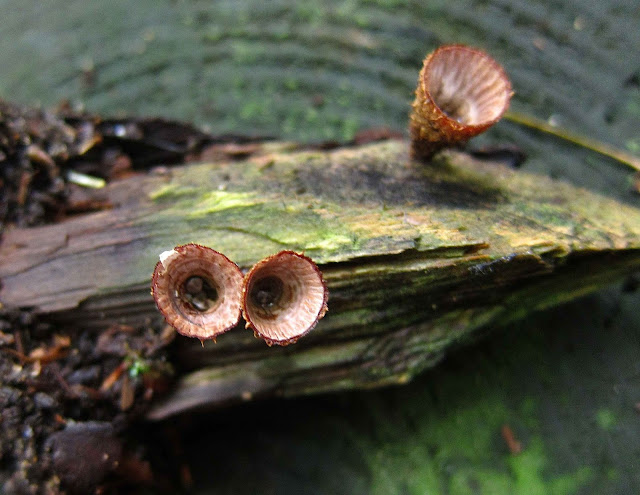 I did, however, spy some almost-as-tiny fungi, Marasmiellus nigripes, growing nearby.  Despite their small size, these itty-bitty mushrooms were easy to spot on the dark forest floor because of their white caps atop gray stems.   Although they resemble little umbrellas, they didn't provide Sue much shelter as the rains came harder and harder.  But that couldn't dampen our spirits after we'd had such a wonderful time among the remarkable plants. 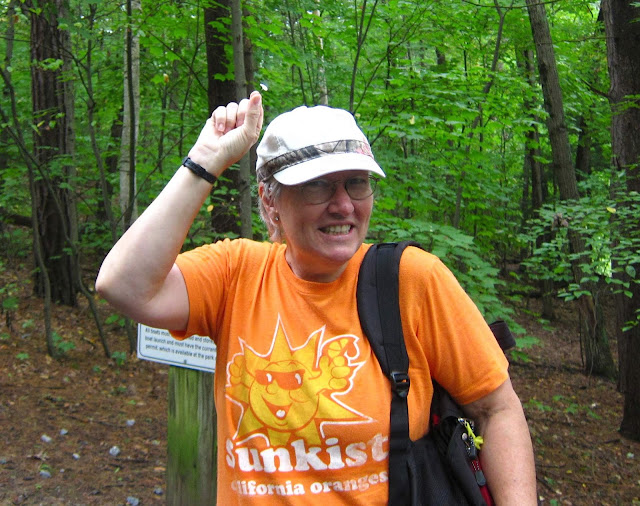 Posted by Jacqueline Donnelly at 9:39 PM

Wonderful! I am so happy for you finding such rarites.

it sure was a good time yesterday, even in the rain.We were even lucky in that regard, since I later found out that it poured in locations all around us at that time!

Love that photo of the Striate Bird's Nest. They are very cool and you captured them perfectly.