Not Much Snow, But Lots of Ice

Saturday, Feb. 8:
We lucked out again.  Just as with Tropical Storm Irene and Hurricane Sandy,  Winter Storm Nemo hardly touched us up here in northern New York, although it sure walloped the coastal areas of the Northeast.  We got maybe four inches of snow and none of the gale-force winds that whipped areas to the east of us, where highways became clogged with cars stuck in several feet of snow and many communities remain without power today.

Actually, I'm disappointed.  I would have liked a couple of feet of snow.   Ah well.  Although I was deprived of the drama of a major weather event, I did find some compensatory drama  today in witnessing the incredible buildup of ice in the Hudson River up north of Warrensburg.  My friend Evelyn Greene had told me she doesn't remember the ice ever mounting so high, to the point where it was overwhelming some of the riverside roads.  So when this morning dawned bright and clear, I sped up well-plowed highways to see this accumulation for myself.

Here's the scene along Golf Course Road that runs north out of Warrensburg.   This photo is the view  looking south from where I had scrambled out onto the jagged ice.  I wish I had a photo of this same location in summer, showing steep banks that drop around 15 feet or so from the road to the river's edge.  Here, the ice has completely filled the river's flood zone, with jumbled heaps of it actually pressing against the guardrails of the road. 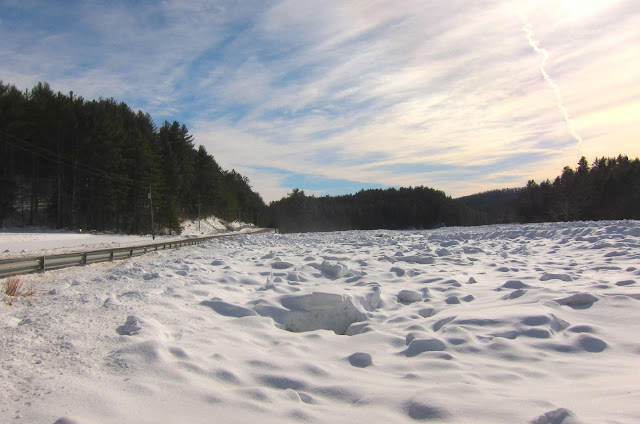 I continued north to where the Hudson runs under a bridge at the Glen,  where I crossed to the road that runs south along the western bank of the river.  I stopped at the spot we call the Ice Meadows and made my way down through the woods to the river's edge.  Here I found the ice had mounted all the way to where it was starting to actually enter the woods, the huge chunks pushing over trees in their path. 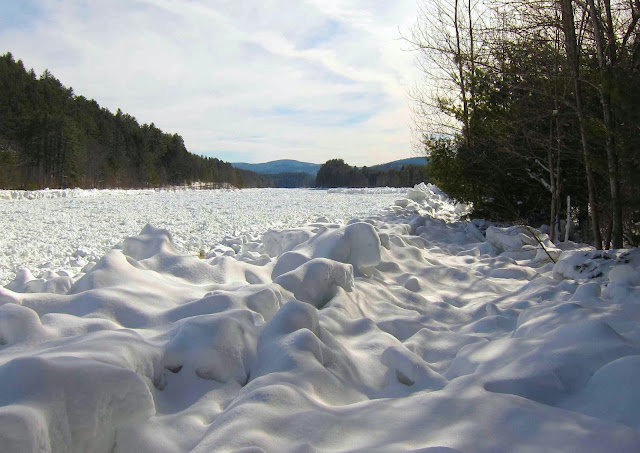 When I visited this very same spot with Evelyn Greene and some other friends on January 23, the ice was still well down below the banks, as this photo reveals, with us standing on solid ground that is now buried many feet under the ice.  Quite a difference in just 3 weeks!  Evelyn has told me that this build-up does not occur gradually over the winter, but that the river rises quite quickly when the frazil builds down to the river bottom and completely dams the flow.  Ice -- both slushy frazil and hard-frozen block ice -- is carried onto the shore by the rising flood and deposited there when the dams give way and the water recedes. 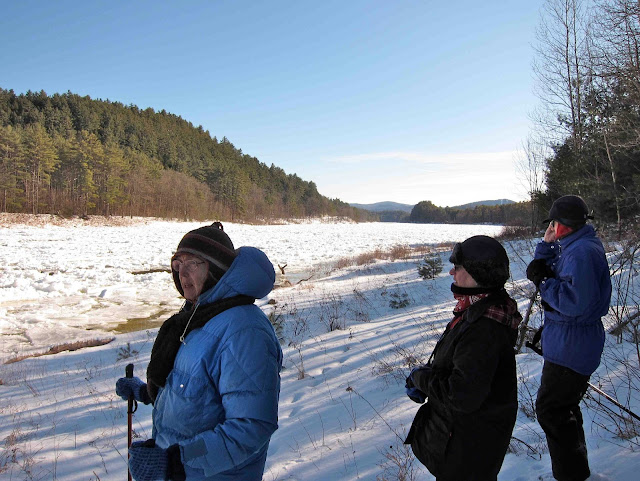 Here's the same location in June, showing the normal course of the river.  I guess it's obvious how the Ice Meadows got its name.  Such massive accumulations of ice certainly work to preserve the banks as an open, meadow-like habitat.


Continuing south along the river road, I eventually had to stop and turn around.  Near an area known as Snake Rock, the ice had completely covered the road, rendering it impassable. 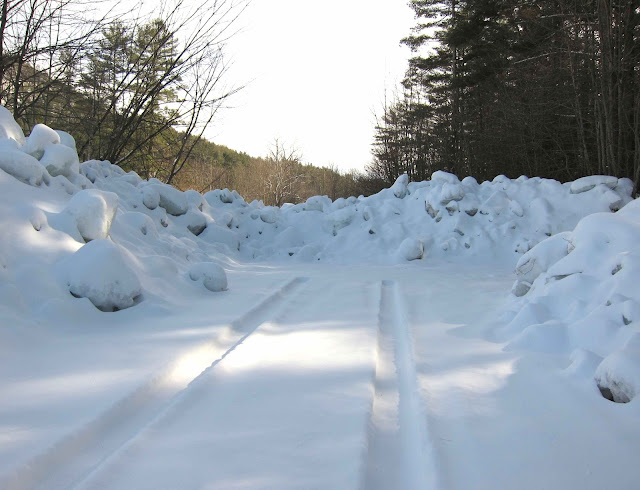 I continued on foot to where I climbed atop the massive accumulation, then looked back from where I had come.  Road crews have been working to clear access through the ice build-up, but they still have a long way to go.


Here's the uncleared road, continuing south.   I wasn't going to get back to Warrensburg along this road today!

Only the top of Snake Rock was visible above the heaps of ice.  Although a particular kind of white ice called "frazil" is responsible for creating the ice dams that cause the river to rise to such heights, there were obvious chunks of blue ice among the deposits, ice that was formed in water less turbulent than that which forms the frazil.  (See my post from January 23 for a  more detailed explanation of how frazil forms.) Many of these blue-ice chunks were over three feet thick. 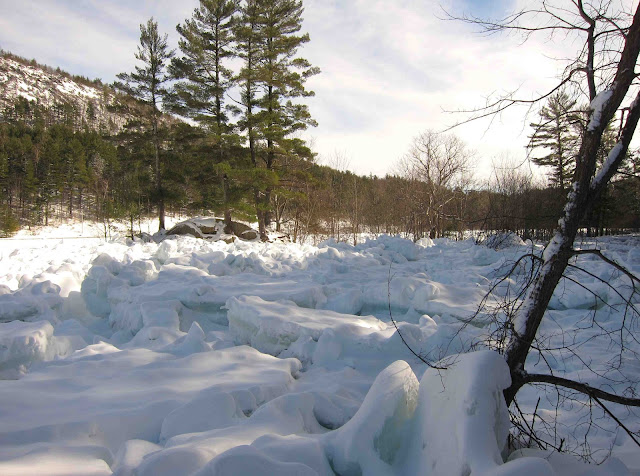 Just as I was about to leave, this young man came along, wanting to witness this dramatic accumulation for himself.  I was glad to have someone to stand near the ice, the better to show the  height of the ice compared to this rather tall man. 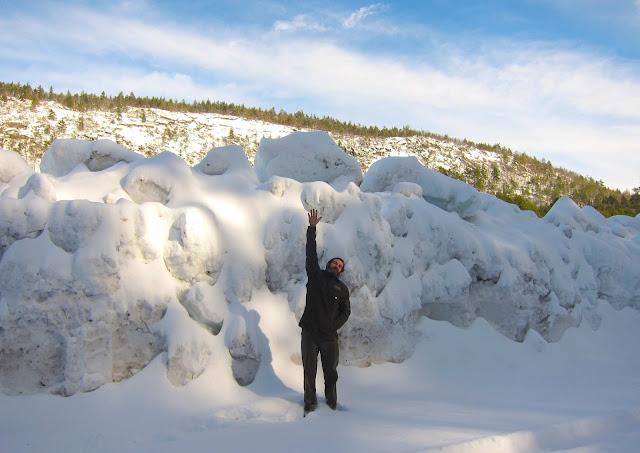 I think it's going to take a very long time for all of this ice to melt.  We may not see the ground along here until July!
Posted by Jacqueline Donnelly at 12:13 AM

what's amazing is to think of the frogs and tender orchids that we see there in the summer, somewhere underneath all that ice right now

Wow! The human in the photo sure adds a dramatic sense of scale!

Might the reason for the buildup of all the (hunks of) ice, be more frequent freeze-thaw cycles?

Was there yesterday, but your photo's really captured it so beautifully! Thanks!

I kept looking at the June photo compared with the one taken yesterday and wondered how you were walking in snow over all those rocks. Took me a while to realize you were on an old road.

I was up there last Wednesday night and the ice was just coming up towards the road. Being there in total darkness, standing on giant chunks of ice while hearing nothing but the river trickling underneath was a cool experience!

A fine documentary of how the Ice Meadows come into being. I've sen them in June, but not in February.