I wasn't going to go out today. Sometimes I have to stay home and take care of things around the house. But then I got into a Facebook spat with some folks who were dancing on Bin Laden's grave. I suggested that returning evil for evil was not going to heal the wounds of 9/11, and that the slaughter of hundreds of thousands of innocent Iraqis and Afghanis who had nothing to do with 9/11 was also a terrible crime. Well, one can just imagine how that was received! Among the kindest of the calumny heaped on my head was the query, What planet did I come from? Hmmm . . . . Well, I believe I honor my planet at least as well as most folks do, and I also believe in and worship the One who created it and loves every one of its inhabitants, not just the Americans. But I knew it was fruitless to continue the argument, so I shut down my computer and fled to the Yaddo wildflower garden. 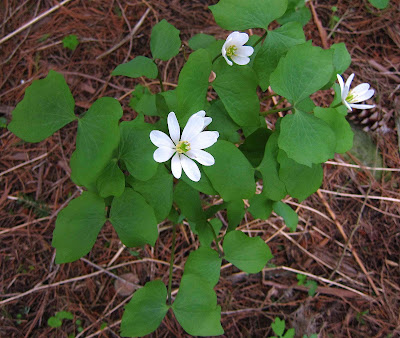 As it turned out, this was my lucky day. The Twinleaf at Yaddo had opened its buds for its moment of bloom, and I was there to witness it. The slightest breath of breeze will dislodge the snowy petals of this rare flower, and tomorrow's rain will surely bring its season to a prompt close. This flower is a good reminder that life is brief and that we should live it well. I was happy to spend an hour in its company.
Posted by Jacqueline Donnelly at 9:40 PM

What a beautiful flower, I have never seen one before.
Well done you for at least having a go at saying your piece.

and peace! My skin crawls when I contemplate celebrating the death of anyone, no matter how justified, as if it were the winning touchdown at a football game. It trivializes humanity. Your rare flower was a true gift - would that more appreciated such.
Fortunately those on my FB with the tendency to 'rejoice' laid low - one of the better posts, a quote from Dr. Martin Luther King:

"I mourn the loss of thousands of precious lives, but I will not rejoice in the death of one, not even an enemy. Returning hate for hate multiplies hate, adding deeper darkness to a night already devoid of stars. Darkness cannot drive out darkness: only light can do that. Hate cannot drive out hate: only love can do that"

apologies - it appears that I took a FB posting as true :-( the quote, while relevant, is fabricated and NOT one from Martin Luther King. Feel free to delete. sorry

Thanks, Cranky. I would never see this flower, either, since it has disappeared from much of its natural habitat. But happily, someone has planted it in a garden near my home. Thanks, too, for your supporting my having my say.

Hike/giant, I saw that quote on FB, too. Even if King didn't say those things (who says he didn't?), he WOULD have. He sure said similar words that are equally true.

Lovely flower!
Yes, I share your feelings around the celebrations around Bin Laden's death. I sure felt alienated in listening to the news regarding all the celebratins. There's no question about the inexcusable, unjustifiable, horrific causes and actions he was behind, but I can't help but recall a contrasting response:"Patriots asked Jesus to lead them in an armed struggle against an evil foreign power. His reply: LOVE your enemies."

Thanks, catharus. It's somehow a comfort to know that others share your distress.