Still Icy on the Ice Meadows

What's that the weatherman said? SNOW!? Up to a FOOT!? Yup, that's what's predicted for the mountains tonight. Oh well. It's only April. Because we've been having such a freaky warm spring, we tend to want to rush the season. I know I did, heading up to the Ice Meadows on the Hudson River north of Warrensburg yesterday, hoping to find some of the rare wildflowers others have told me bloom there. 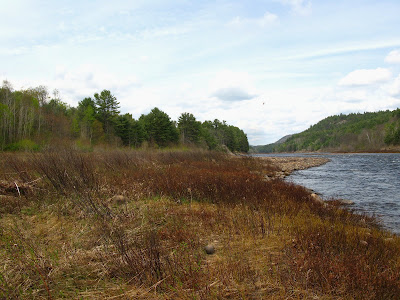 Well, the meadows were nowhere near being in bloom, what with the icepack only recently melted. In fact, thick deposits of frazil ice still covered the ground in spots, the shrubbery that spent the winter beneath them still bent from the massive weight of that ice. 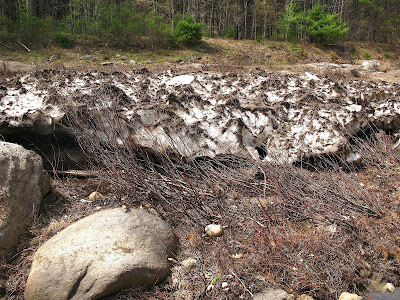 Up high on the banks where the rocks meet the woods, I found lots of Early Saxifrage blooming, and a few Columbines just setting buds. Down on the sandy flats, brave little Bluets bloomed with abandon. And that was just about it, for things in bloom. But everywhere, I found the promise of flowers to come, such as this sprightly cluster of Columbine leaves, nestled among the rocks. 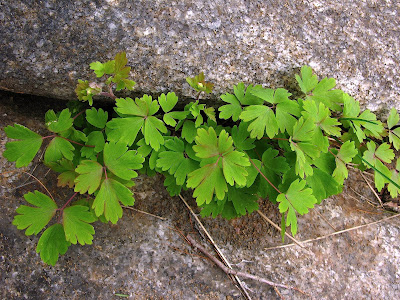 And here are the leaves of Canadian Burnet, a plant that blooms here profusely late in the summer. I had never noticed the delicate edging of its serrated leaves before. Pretty. 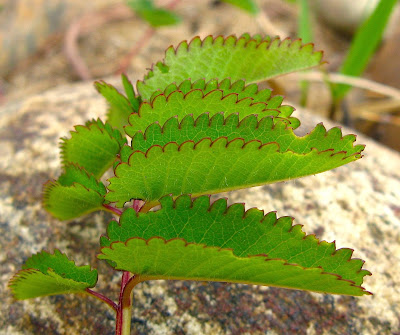 Because there were so few flowers to consume my attention, I paid more notice to the marvelous rocks, especially those near the state forest access on the east bank of the river just north of Warrensburg. I'm not sure of the actual geological structure of the rocks that form these spectacularly striped banks, although I have heard them referred to as marble rocks.
And some of them do indeed look "marbled," as in the chocolate swirls through a marble cake.

In some places the rock is very crystalline and of a rich green color.

Some rocks are a soft sandy beige, with touches of gold and gray and stripes of deeper color.

Here's rock that must contain iron, because of the rusty wash, and with cracks that look like captured lightning bolts. 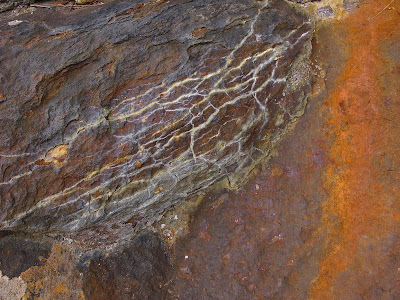 In places, thick blankets of coal-black rock ooze over the snowy white marble. 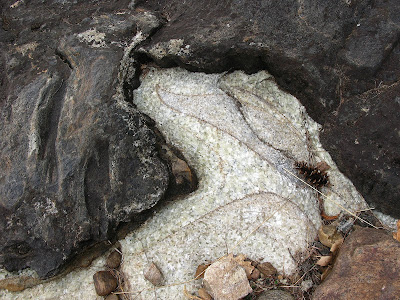 I once asked a geologist to tell me about these rocks, but he promptly lost me in all the technical jargon that he used, and I just kept nodding and smiling and saying I see, when of course I didn't but didn't want to appear too dumb. There must be a wonderful drama here in how these rocks came to be, and I hope someday to learn it. In the meantime, I just marvel at how beautiful they are.
Posted by Jacqueline Donnelly at 9:09 PM

Jackie- On my computer, I can't see your link to leave a comment- i think the text shows up as the same color as your background- I just guessed where to click and I did get to this page.

I enjoyed this post- It's hard to believe you still have snow up your way. In Ohio, we only have sedimentary rocks, your rocks look like some time of metamorphic rocks that have been twisted and bent with time and pressure. Very cool!

You need to bring Laurie up to help you with the geology!

Love the shot of the Canada Burnet - it is quite lovely.

Hi Tom. I've heard that complaint about the comment text from some other readers, but I don't know what to do about it. On my screen, the word shows up cream against green. But thanks for your diligence in finding a way to comment. It's always good to hear from you.

Yes, Ellen, I think Laurie could probably tell me about these rocks if she weren't struck dumb with amazement at their dramatic beauty.