A Quick Revisit to Skidmore's Woods

Saratoga Springs didn't get the snow they got up north -- as much as two feet, I heard -- but today was cold and windy and threatening rain, and I didn't go out. Except to walk to the dentist. Pooh! So my woodland wanderings today were all virtual, revisiting photos I took in the Skidmore woods four days ago. This time of year, the flowers come so fast into bloom, I can hardly keep up with them. By the weekend here, the temperature might reach 80. Very weird weather!
Speaking of weird, I found all these snippets of Red Oak sprouts lying all over the forest floor out at Skidmore. I was wondering what kind of wind would bring all these healthy twigs down, when close examination revealed they had all been bitten off. I remember finding a similar scene last spring, only then the twigs were Red Maple. I'll bet it's the same bushy-tailed little brush-hog who's at it again: a Red Squirrel clearing its personal highways way up in the canopy. 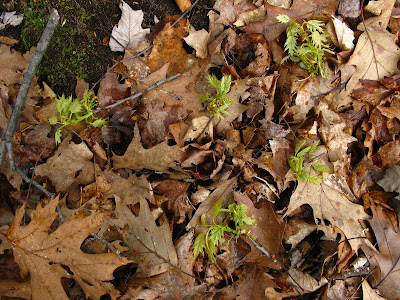 Anybody know what kind of maple this is? It's not a Red Maple, despite its bright color, nor a Striped Maple, which has red twigs, but nothing that looks like this. The city keeps planting alien varieties of maple trees along the streets, so maybe it's one of those, escaped. I don't know why they can't stick to Red or Sugar or Silver Maple, our native trees.

Here's one of our most beautiful native trees, the Flowering Dogwood. I planted one in my backyard last spring, and the squirrels ate every single flower bud. But this year I'm happy to report they didn't touch it, and now it's gloriously in bloom. As are the dogwoods at Skidmore.

Here's another glorious bloom, the vividly red and intricately shaped Columbine. I found just a few coming on in the Skidmore woods, but I bet in a week, if that weather warms up as predicted, the woods will be teeming with them. 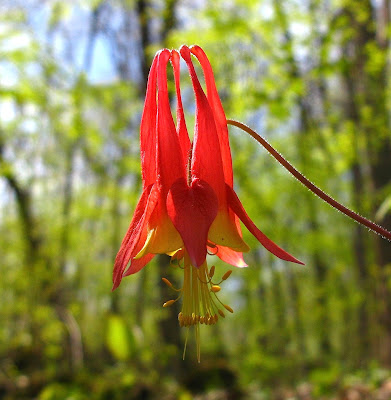 Here's a view of the Columbine's undercarriage, revealing just how intricate this flower is. 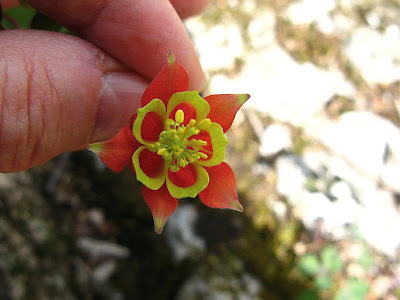 I promised to post a photo of Large-flowered Bellwort when it came into bloom, and here it is, quite a bit earlier than in previous years. I did not know that bellworts have petals and sepals that look alike until I saw botanist Bob Klips's website, where he demonstrates the fascinating structure of this blossom. Check it out.

The profusion of Large-flowered White Trillium in the Skidmore woods is worth a trip to see. There are areas of the woods where they grow by the hundreds. As wildflowers go, they bloom for quite a long time, and as they fade, they turn a pretty pink.

Posted by Jacqueline Donnelly at 9:46 PM

Beautiful photos of beautiful flowers. I always enjoy seeing the flowers through your eyes.

Thank you, Squirrel. I think you know that I feel the same about your photos.