Quick Trip to the River 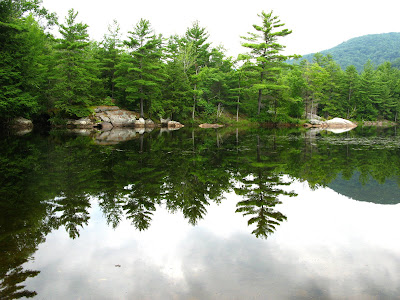 Just a quick trip to the Hudson today, to explore the banks on foot. I'm off to Philadelphia for the weekend tomorrow, to visit my son and his family, and I wanted to check on that Purple Fringed Orchis I found last week. Some folks were illegally camping near by it last Sunday, and I was hoping it hadn't been picked or trampled. Oh happy day, it was fine!
A few more tiers of blossoms have opened, so it's getting pretty showy. Dangerously so. The more eyes that see a beautiful flower, the more fingers itch to pick it. Or even worse, dig it up to plant in gardens at home. Certain death, of course, for an orchid. By the way, I revisited that island today, where all those orchids were mowed a few years back, and wonder of wonders, I counted five of them making a comeback. Hooray!
In a week, the river banks will teem with glorious bloom. A few Cardinal Flowers show their blazing red even now, but soon masses of them will follow. Spotted Joe-Pye Weed (Eupatorium maculatum) is just about to open its buds. And its buds are just as pink and pretty as its flowers. 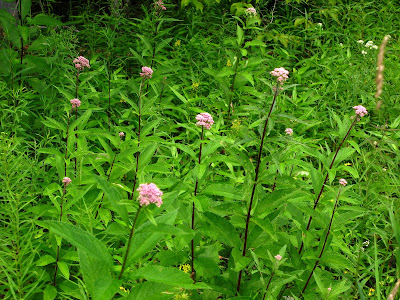 This gooseberry bush bloomed long ago, but its reddening leaves looked striking against the lichen on this rock.
And how about this slime mold! Glowing like a lamp in the dark woods, it was, or so it seemed, with its brilliant yellow. (Sorry, but I can't identify it by its scientific name.)
Here's a close-up of that slime mold. Maybe someone out in webland knows its name. In the meantime, I think I'll file this photo under "slime mold, scrambled egg."
I'll be off the web for a couple of days, as well as out of the woods. I'll be getting my nature fixes from such wildlife as my grandkids: Tayla, 12; Maya, 3; Sean, 1. And maybe a little rock and roll, since rock and roll is what my son does for a living. Rock on!
Update (8/06): As the comments to this post reveal, an informed reader has ID'd this slime mold as Fuligo septica. When I sought more information about it, I discovered that its common name is "Scrambled Eggs Slime Mold." Well, of course! I also learned that slime molds are not fungi at all, and that they are so distinctive they've earned a kingdom all their own. How about that?
Posted by Jacqueline Donnelly at 7:51 PM

I think it might be Fuligo septica but I am not positive. Slime molds are pretty cool.

Thanks, Squirrel, for the very good guess. I thought it might be that, but wasn't sure. You're definitely right about slime molds. Some look like hedgehogs or lollipops or honeycombs or Cheetos or something the dog coughed up. The variety is amazing!

Mmmm, scrambled egg slime mould. Sounds much more appetising than Fuligo septica - not that I'd be seriously tempted, of course...