Grandma's Back, with Photos

I just got back from visiting my son Peter and his family in New Jersey near Philadelphia. I'm so swamped right now with household duties I can't get out to the woods or the river. So I'm going to be like the doting grandma I am and post pictures of my grandkids. I'll pretend they're some kind of wildlife. I only wish I saw them more often near Saratoga's woods and waterways, and not traffic-jammed hours and hours on the New Jersey Turnpike away.
My son Peter Donnelly is a founding member of the rock band The Figgs and also plays bass in the Terry Adams Rock and Roll Quartet. He's also a doting dad and a loving husband to beautiful Sharla St. Rose. A native of St. Lucia who grew up in Brooklyn, Sharla holds the job with the family's health insurance. Every rocker should be so lucky. 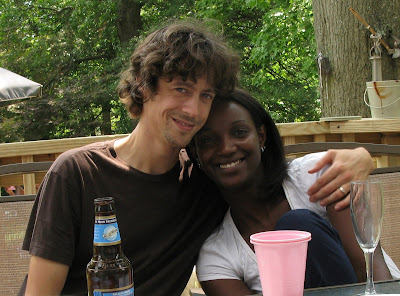 Maya Elizabeth is now 3, a smart and lively bundle of cuteness who never stops. Except to eat cherries. That's a cherry pit between her teeth. 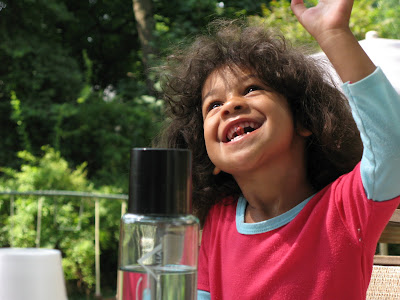 Sean Pierre is now 1 and about as adorable as a baby boy can be. He's as calm as his sister is lively and as sweet as the watermelon he loves to eat. 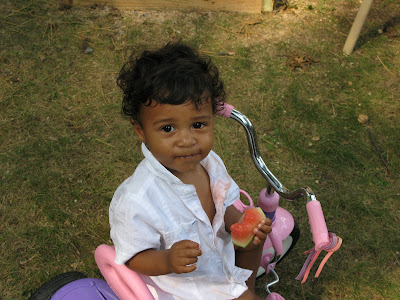 Posted by Jacqueline Donnelly at 4:07 PM

Those kids are supercute! Also, I really like the Figgs, and have kept an ear open for them since hearing 'Favorite Shirt' back in 1995. Probably not unusual to hear coming from someone who lives near the Capital Region, but it was a neat surprise when I logged into blogger. :)

well the whole dern family is good-looking -- now if you could only persuade them to live closer to here.
That ride to Jersey is something to make you really appreciate the North Country upon your return.
"Kids as wildlife" - ain't that the truth!

A Figgs fan among my readers! Well sure, why not? You'll be happy to know, Lindsey, they're still making records. Thanks for the comment.

I'm not biased or anything, suep, but I have to agree. And yes, I often thank my lucky stars that I live up here where the drivin' is easy.

It is definitely a small world! I am so psyched to hear they are still making music! :D

Wow what gorgeous grandkids - I may overuse the word gorgeous on occasion, but this is not one of those occasions!

You are indeed blessed! Thanks for showing us some more lovely creatures. The smiles directed toward the photographer say volumes!