This was a very good week for finding rare plants at Moreau Lake State Park! My friends Sue Pierce, Ruth Brooks, and Nancy Slack and I found three wonderful examples, all in one day, at various locations around the park.

The rarest species of all was the Pringle's Autumn Coralroot (Corallorhiza odontorhiza var. pringlei). 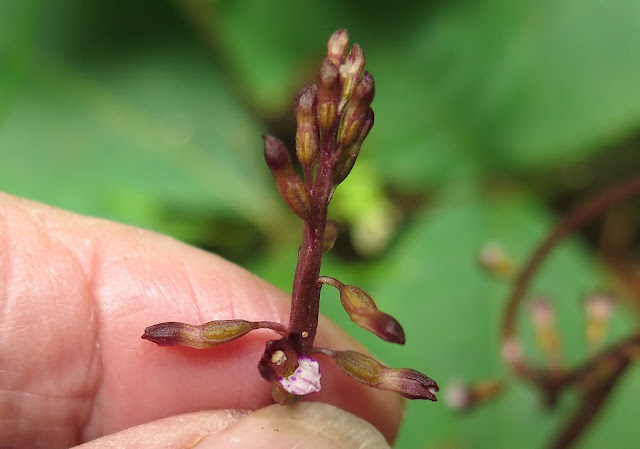 Pringle's Autumn Coralroot was actually rated as Extirpated from New York State for well over a hundred years, until a secure population was discovered in Moreau Lake State Park just last year. My friends and I were happy to find it blooming today in the woods, right where we'd found it last year. And finding this wee little coralroot is not so easy to do, it being not only minuscule, but also the same color as the forest floor. This very rare variety of native orchid can be distinguished from the ordinary variety of Autumn Coralroot (C. odontorhiza var. odontorhiza) by the open floret and the floret's broad lower lip. 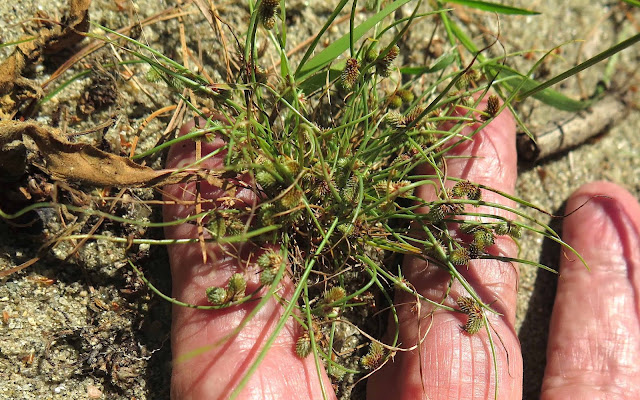 Despite this wee little plant's common name of bulrush, it is actually a flatsedge, although its spikelets are round and not flat. To me, they resemble miniature clover flowers. Rated as an Endangered species in NY State, this plant had not been found at Moreau Lake for over 50 years, having been submerged by high water levels. It was rediscovered on the lakeshore just two years ago, after water levels in the lake had fallen sufficiently to expose the seeds to air. Although water levels have once again risen to inundate the thousands of plants we found in 2018, an abundant number of this very rare plant still thrives at Moreau Lake on a small stretch of sandy shore. This same species of flatsedge goes by the scientific name of Lipocarpha micrantha in the New England states, where it is rated as equally rare.

Finally, we also found several plants of American Ginseng (Panax quinquefolius) growing atop some calcareous outcroppings in the forest. 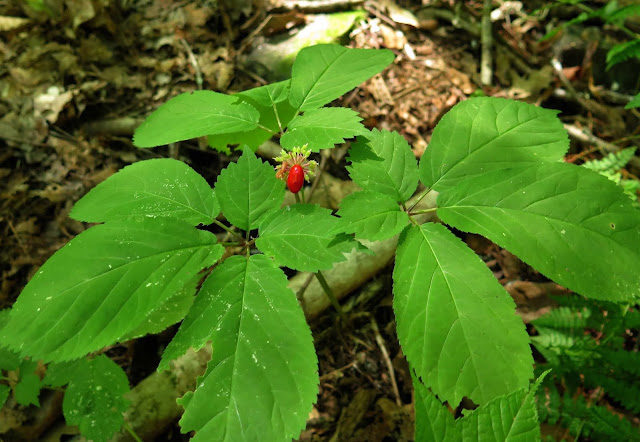 On the rare plant watch list in New York State, where it is listed as Expolitably Vulnerable, American Ginseng is a plant that is becoming harder and harder to find, due to overzealous collecting. Our friend Sue Pierce was the one who spotted it today, noticing the one bright-red berry that remained on the plant. Luckily, the berry dropped off as we examined it, allowing the low green plant to once again disappear from sight among the surrounding greenery on the forest floor. We are hoping that this plant's return to anonymity, as well as its presence amid many thousands of acres of forest, will help to protect it from discovery by any possible poachers.

Posted by Jacqueline Donnelly at 2:10 PM