My friend Sue Pierce had good reason to smile this week! The rare flower she'd been waiting to see in bloom since she first discovered its spent flower stalks last fall, was finally flowering at last! 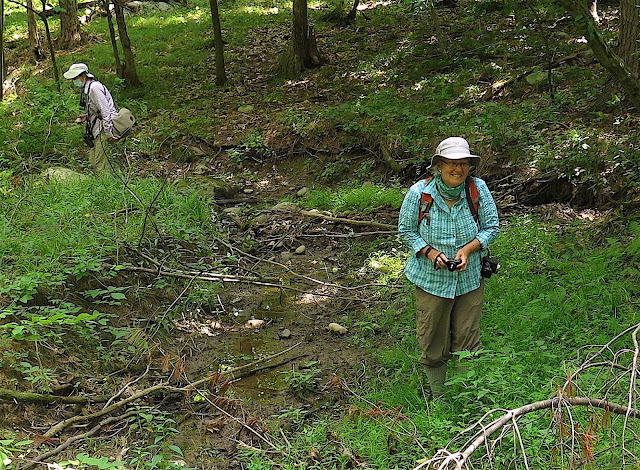 Called Winged Monkey Flower (Mimulus alatus), this flower is classified as a Rare (S3) species in New York State, but Sue was able to find over a hundred specimens last fall, and again she found well over 50 blooming today along a barely trickling creek in Saratoga County. Sue is known for her terrific eyesight, which helped her discern this quite unusual plant when most of us would never have noticed it at all, surrounded as it was by a tangle of other indistinguishable greenery. Our mutual friend Ruth Brooks (pictured) and I came along to help Sue hunt for them, but it was Sue who showed us what to look for, and she who found the most plants. Good for YOU, Sue!
As we started our search, the first few plants we found were almost done blooming and were dropping their flowers at a touch.  Since this plant has not as yet been reported from Saratoga County, Sue was hoping to secure a specimen to submit to the New York Flora Association to be vouchered as present in this county. So we all felt rather distressed to find such fragile flowers that wouldn't hold up well to pressing and drying.  But a further search along the creekbed revealed many more Winged Monkey Flower plants, many of which held onto their flowers with more tenacity. Mission accomplished! 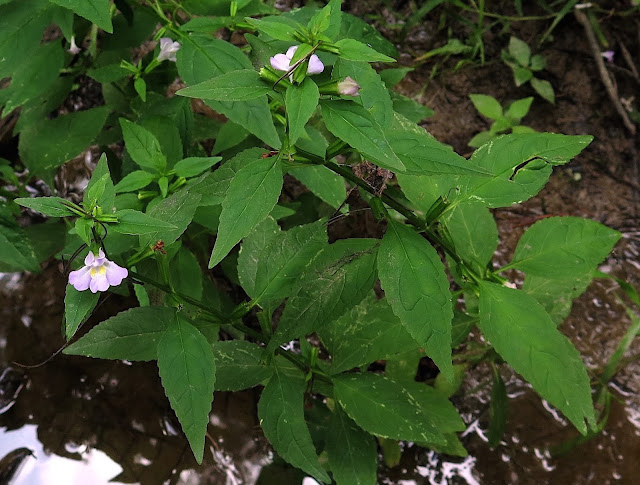 This photo shows the long winged leaf stalks and very short flower stalks that help to distinguish this species of Winged Monkey Flower (Mimulus alatus) from the much more common species of Monkey Flower (M. ringens), which has short leaf stalks and long flower stalks. The pale lavender color of M. alatus's flowers is also different from the bright-blue flowers of M. ringens. 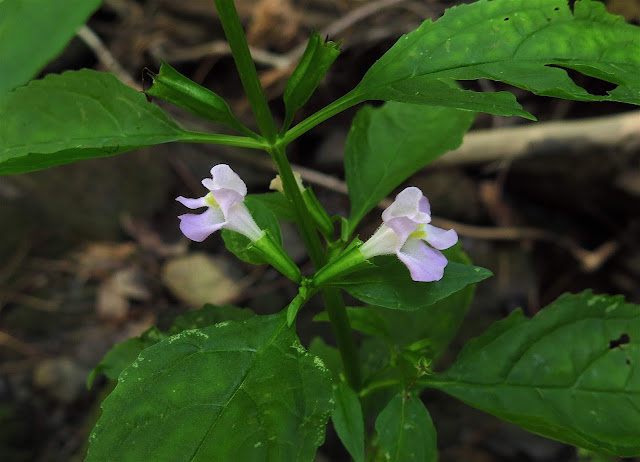 Here's a closer look at a pretty lavender bloom of Winged Monkey Flower.  I've been told that this native plant's vernacular name was suggested by its flower's resemblance to a monkey's face. Sorry, but that seems rather far-fetched, to me! 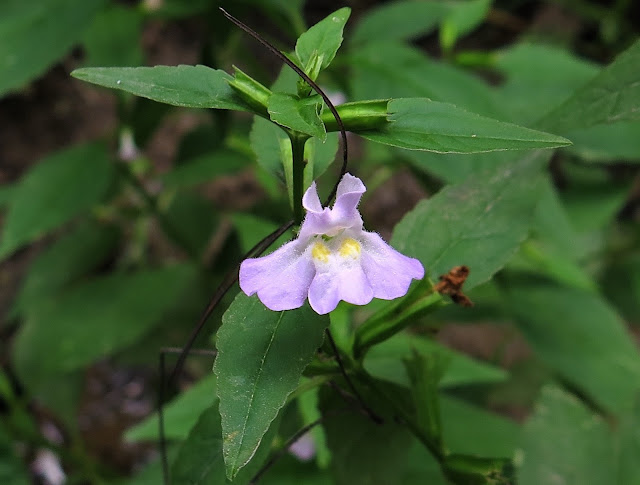 For comparison's sake, here's a photo of the much more common blue-flowered Monkey Flower. 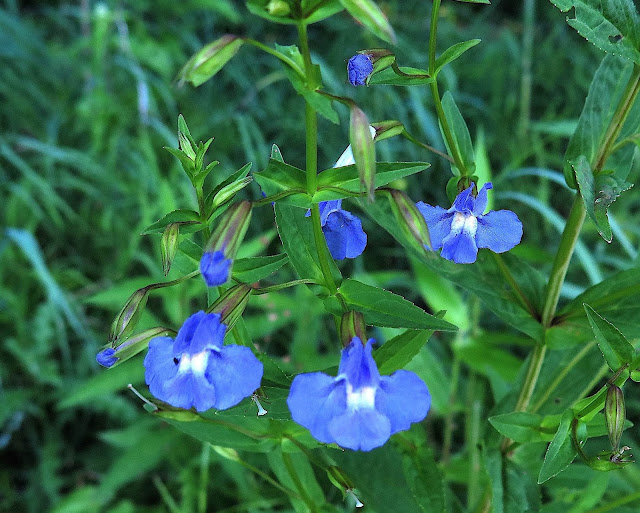 The bright-blue flowers might be distinctive enough for ID, but also note that the stem-clasping leaves have no stalks at all, while the flowers are held well away from the stem on long stalks.  This is just opposite from the way leaves and flowers are arrayed on a Winged Monkey Flower plant. This makes it easy to ID either plant, even when not blooming.  Which is what Sue was able to do last fall, when she first discovered this abundant population of Winged Monkey Flower, even though it had already gone to seed.  Not too many people would ponder over some fading, flower-less plants.  But that's what makes Sue a fellow wildflower nut, and it's one of the reasons I love her so! (Only ONE of the reasons, of course!)
Posted by Jacqueline Donnelly at 9:13 PM

Neat find! Interestingly, here in New Jersey, all the M. ringens I've seen have almost the same color flower as your M. alatus; I've never seen them in blue. I've only seen the M. alatus in fruit and then very rarely, would love to catch it flowering!

Congratulations to you ladies, great find.