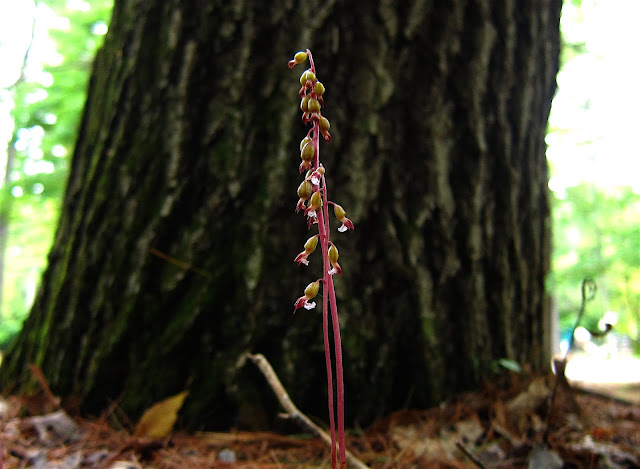 Pringle's Autumn Coralroot, a very rare orchid that's happily at home in Moreau Lake State Park
OK. Just give me a minute to catch my breath! I've had some exciting news.

Can you imagine what might make an amateur wildflower nerd like me ecstatic? How about learning that the orchids in photos I once posted on this blog turned out to be an extremely rare variety long thought to be extirpated in the state? That was my big news this week, when I was told that an orchid expert had identified those flowers as Pringle's Autumn Coralroot (Corallorhiza odontorhiza var. pringlei), a variety last reported from only one county (Monroe) in all of New York State. That was back in 1903. And this variety has never again been reported from there or anywhere else in the state, according to the New York Flora Association Plant Atlas. By now, the atlas had classified Pringle's Autumn Coralroot with an X. That means Extirpated. Not Endangered nor Threatened nor Rare, but simply Gone for Good.
Now, I find Autumn Coralroots at Moreau Lake State Park almost every year. And when I do, I take photos of them and post them here on my blog. I always assumed that all of the coralroots I photographed were the common variety, Corallorhiza odontorhiza var. odontorhiza, a good find because, hey, they were orchids, but nothing to get too excited about. But my friend Dan Wall is an orchid fanatic who is also an artist, which means he pays very close attention to every orchid he sees (or paints or photographs to include in a book about New York orchids he's working on). A careful observer, Dan notes every detail of petals, stems, and leaves. When he saw some of the orchids I had pictured on my blog and compared them to those he knew to be the common variety of Autumn Coralroot, he suspected "my" orchids could be the really rare ones, and he sought confirmation from New York State botanists, sending them my photographs to consider.

Of course, our state botanists had never had a chance to lay their eyes on a live Pringle's Autumn Coralroot (at least, not here in New York). But they knew of someone who probably had, a man who is nationally known as "the" expert on this particular taxon. So they sent my photos to Professor John Freudenstein, Chair of the Department of Evolution, Ecology, and Organismal Biology at Ohio State University, who is also director of the herbarium there. Professor Freudenstein confirmed my friend Dan's suspicions. Here's one of my photos Professor Freudenstein observed to reach his conclusion (another is posted above): 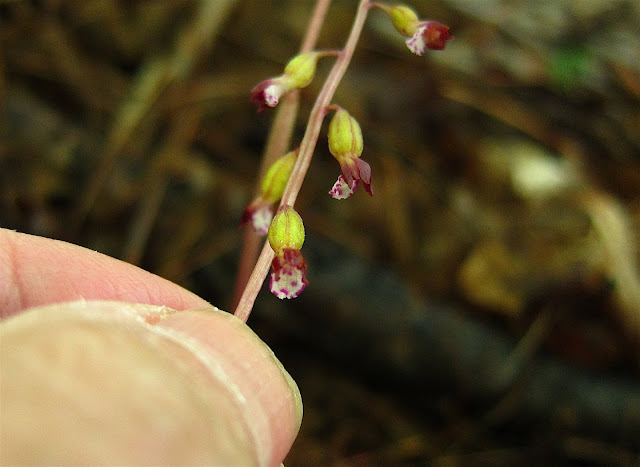 Here's what Professor Freudenstein concluded: "The photos . . . appear to me to be of what I would call var. pringlei. The [flowers] are clearly chasmogamous and fit within the circumscription of var. pringlei."

Thank you, Professor Freudenstein! I confess I will have to study up on what those botanical terms exactly mean, but first I have to come back down to earth. And then, when it's time (which should be mid-September), Dan and I must return to where I first found these orchids, ascertain that the plants are still there, and finally make sure they receive the protection they deserve as one of our state's rarest plants. The one location in Moreau Lake State Park where I once found more than 30 of them has been buried under several feet of leaves that were dumped atop them, and they haven't reappeared at that site for several years. It was that population I photographed for the photos above. Here's hoping the orchids revive there, once the leaf piles are removed, but I also know where some others appeared in the past. Now I can't wait to go find them!
I want to emphasize that Dan Wall is the one who deserves the credit for starting this investigation. Thanks a million, Dan! Thanks, too, to Steve Young, Chief Botanist for the NewYork Natural Heritage Program, and David Werier, author of the recently published Catalogue of the Vascular Plants of New York State, the botanists who knew whom to contact for expert opinion on this particular orchid and then shared the good news with me.
Whoo hoo!!!

Posted by Jacqueline Donnelly at 4:59 PM

It gave me cold chills to read this. Truly it did. I cannot tell you how happy I am for you. Awesome indeed.

Congratulations. Unfortunate that it was dumped upon; makes you wonder how often that happens. Not far from here a Hooker's orchid was mowed off by a road maintenance crew -- another casual casualty.

All I can say is wow! That's a botanical wow.