The wind today is lashing a cold rain around down here in Mt Kisco, Westchester County, where I'm spending the rest of the week with grandkids while their parents are away.  I'd hoped to be taking my granddogs -- two huge Bernese Mountain Dog puppies -- for long happy walks in the woods around here and check out some nearby nature preserves.  Well, I do have to take the pups out for walks, of course, and they're happy enough to roll around in the mud, but I'm not so happy about staying outdoors with them, nor wiping the mud from their saturated bodies before I can let them back into the house.  Also, I'd forgotten about the way dogs smell when they're wet.  Ah well. . . .  Maybe the sun will come out tomorrow.

I'm glad I made the effort to get out to Moreau's Mud Pond on Monday before I left home, even though that day wasn't all that beautiful, either, with a low gray sky and sodden snow underfoot.  But the view across the pond to mountains beyond always lifts my spirits, whatever the weather.


Winter just seems to drag on now, and though some folks have heard the call of the Red-winged Blackbird already, it's going to be a long time yet before we start looking for even the very first of the new spring flowers.  So we wildflower nuts have to content ourselves with admiring the winter remnants of plants, quizzing ourselves to see if we can recognize them from their husks and buds.

Ditch Stonecrop makes it easy, since its dried seed pods look very much like the flowers that first produced them.  Except for the rusty color.


The same can be said for Maleberry, whose BB-hard berries weren't any softer last summer  when the shrub first bore these fruits.   I wonder if there's any creature on earth that eats them.  The bushes remain full of berries all winter long, and I even find these leftover berries still on the bushes when new flowers bloom come spring.


Thanks to my friends in the Thursday Naturalists, who showed me some similar to these last spring, I now know a Nannyberry bud when I see one, with its long skinny point like a crane's bill.  These are growing on one of the biggest Nannyberry shrubs I have ever seen, almost as big as an apple tree, standing along the western shore of Mud Pond.  The buds were visible from some distance away, due to their pinkish cast. 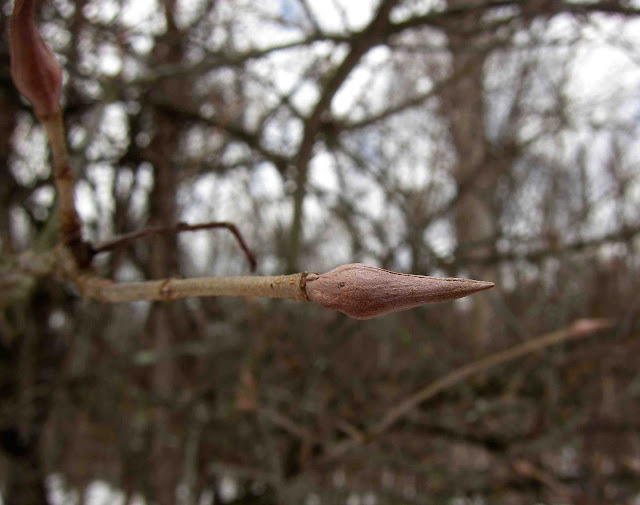 These buds stood out because of their color, too --  a rich chrome yellow.


I would not have known what tree they belonged to if I hadn't noticed the lumpy tumors growing all over the branches.  There's a whole grove of about 20 Bitternut Hickory trees in this low-lying area on the western shore of Mud Pond, every single one of which is infested with these lumps.  A friend pointed them out to me several years ago, and we ultimately learned that the lumps were caused by a fungus called Phomopsis.  The trees may very well have been weakened by this infestation, but as these yellow buds attest, the trees continue to sprout healthy new growth each year.

There was still a little snow on the ground in the woods, which set off the evergreen leaves of Pipsissewa very nicely.  Lots of these plants with their leathery green leaves grow along the trail that circles Mud Pond, but it's not that often we find one that bears its cluster of waxy white flowers.  The seed pod here reveals that this is one plant that did. 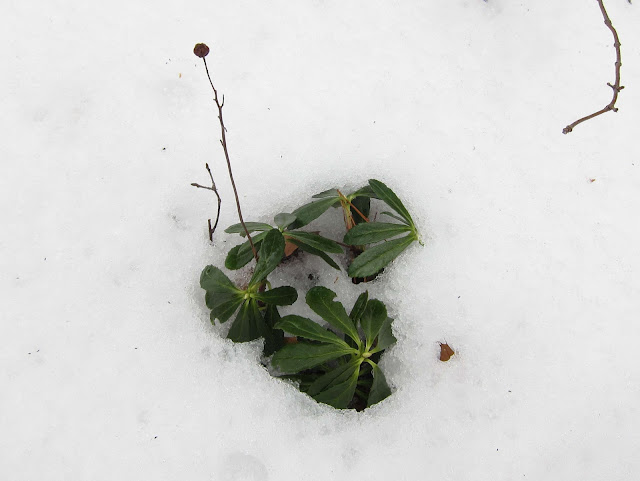 The same can be said for this remnant of Striped Wintergreen, a close relative of Pipsissewa that bears very similar flowers and can be told from its cousin by the white stripes on its dark shiny evergreen leaves. 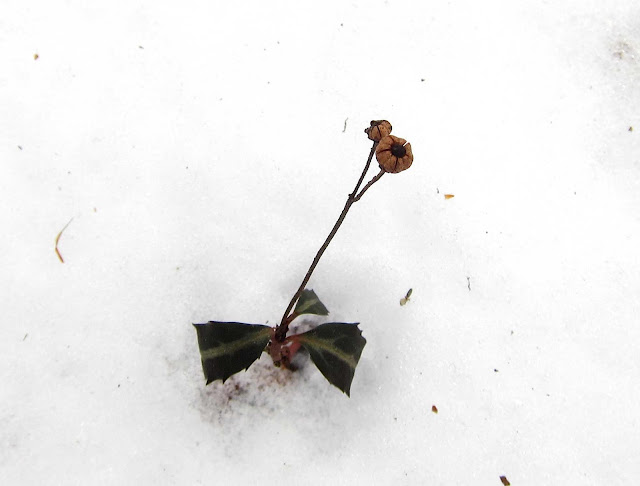 Posted by Jacqueline Donnelly at 2:13 PM

Maleberry Lyonia ligustrina - is that the same plant? If so, from a quick search, I found it is toxic, but livestock will eat it when desparate. My quick scan didn't say anything about wildlife, though.

Yes, Lyonia ligustrina. I can't imagine any animals eating the fruits, because they are as hard as stones. The leaves are rather tough and leathery too, similar to those of other Heath Family plants. But its seeds must get spread somehow, because it's a pretty common shrub.